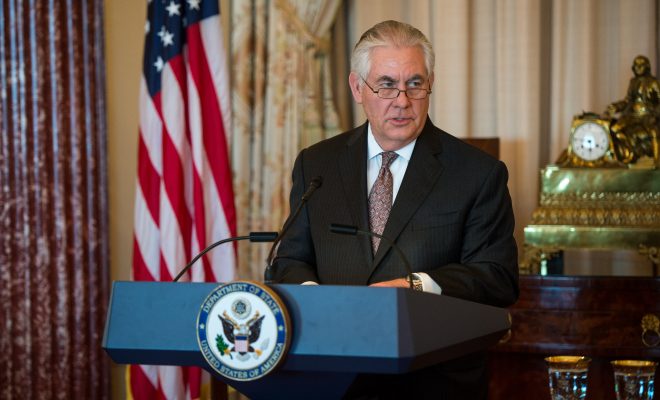 In his first visit to Turkey as America’s top diplomat, Secretary of State Rex Tillerson zeroed in on the country’s vital role in supporting the fight against Islamic State in Iraq and Syria. He largely skirted the more divisive issues, such as Turkey’s concern for the U.S. backing of Kurdish fighters in the region, a potential flashpoint that could endanger the relationship: Turkey views the Kurdish fighters as terrorists. Tillerson did say that “difficult choices” have to be made.

“We look to Turkey as a key partner for stabilization effort in areas once held by ISIS and for ensuring our NGO and UN partners can continue to provide humanitarian relief services inside and outside of Syria,” Tillerson said in a press conference in Ankara, the capital, on Thursday. “We commend Turkey for its efforts to find a peaceful solution to the nearly six-year Syrian conflict.”

The U.S. leans heavily on its NATO ally in the battle against ISIS on two fronts–in Mosul, Iraq and the group’s de facto capital in Raqqa, Syria. For one, U.S. airstrikes in Syria are launched from the Incirlik Air Base, not far from Turkey’s southern border with Syria. But it’s the most potent fighting force on the ground, the Kurds, that could create a wedge in the U.S.-Turkey partnership.

Known as the People’s Protection Units (YPG), the Kurdish militia benefits from generous U.S. support, both financially and militarily. But Turkey sees the YPG as an extension of the Kurdistan Workers’ Party, which it designates a terrorist group. Still, Tillerson pledged there is “no space between Turkey and the United States in our commitment to defeat” ISIS.

This week presented another challenge to the relationship. A day before Tillerson’s visit, Turkish officials alleged that the U.S., in the days following last July’s coup attempt, contacted one of the suspected architects of the plot, Adil Oksuz. The U.S. Embassy in Ankara claims it called Oksuz to alert him that, at the behest of Turkish authorities, his visa had been revoked. Turkey was unconvinced of that explanation. “We are expecting better cooperation,” said Tillerson’s Turkish counterpart, Mevlut Cavusoglu.

In the land of conspiracy theories, the allegation did little to placate Turkey’s fears that the U.S. had a hand in the deadly coup attempt. Furthering Turkey’s suspicions, Fethullah Gulen, the Muslim cleric and former politician that Ankara is convinced orchestrated the coup, lives in Pennsylvania. Turkey has repeatedly called on the U.S. to extradite Gulen, but the U.S. has refused to do so, saying there is not sufficient evidence of his alleged crimes.

Turkey’s relationships with other western allies, like the Netherlands and Germany, have also frayed in recent weeks. President Recep Tayyip Erdogan–whose crackdowns on the press and political dissidents after the July coup has worried leaders around the world–is attempting to expand his powers in a referendum next month.

His campaign has spilled into Europe, where millions of Turks live and are able to vote in the referendum. But the Netherlands, Germany, and others have barred Turkish ministers from traveling to Europe to drum up support for the referendum; Erdogan has likened the European leaders to Nazis. Tillerson left Turkey without a mention, publicly at least, of Erdogan’s escapades in Europe, and his tightening grip at home.

Alec Siegel
Alec Siegel is a staff writer at Law Street Media. When he’s not working at Law Street he’s either cooking a mediocre tofu dish or enjoying a run in the woods. His passions include: gooey chocolate chips, black coffee, mountains, the Animal Kingdom in general, and John Lennon. Baklava is his achilles heel. Contact Alec at ASiegel@LawStreetMedia.com.
Share:
Related ItemsFethullah GulenKurdsRecep Tayyip ErdoganRex TillersonSecretary of StateTurkeyTurkish CoupYPG