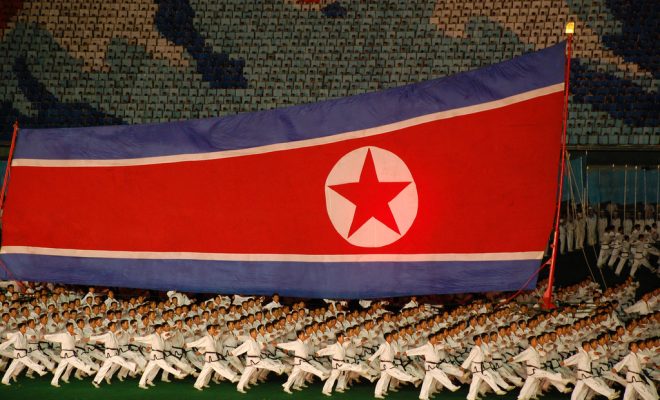 As tensions on the Korean peninsula continue to heat up, Chinese and South Korean officials met in Seoul on Monday and agreed to strengthen sanctions on North Korea if the state continues to carry out nuclear tests. As the two parties finalized the agreement, South Korea had to respond to news that the United States Navy dispatched a strike group to the Korean peninsula. Many in the region, and throughout the world, fear the U.S. strike force might exacerbate an already fractious situation.

The Chinese-Korean agreement on sanctions comes just before a busy period on the North Korean calendar. April 15 marks the beginning of the country’s most important holiday. The “Day of the Sun,” which actually involves three days, commemorates the birth of the country’s founder and first president Kim Il Sung. April 21 honors the birth of Kim Il Sung’s mother and April 25 is Military Foundation Day. The fear is that April’s festivities could motivate Kim Jong Un to order another round of missile tests as a show of national strength. The Chinese and South Koreans hope their threat is enough to discourage any holiday testing.

North Korea has few international allies and is heavily reliant on its diplomatic and economic relationship with China. While China’s agreement with South Korea will not go unnoticed above the 38th parallel, North Korea rarely demonstrates the kind of obedience China might expect from its dependent client state.

North Korea has a long history of shirking China’s wishes in favor of its own agenda. In the past, China was often willing to fund the regime and look the other way whenever North Korea misbehaved because it acted as a strategic buffer with South Korea and, by extension, the United States. While China publicly opposed North Korea’s efforts to obtain nuclear weaponry, Chinese trade with, and aid to, North Korea remained largely the static after Kim Jong Il ordered the country’s first round of tests in 2009. However, this dynamic may be shifting.

The relationship between the two countries seems to have deteriorated since Kim Jong Un ascended to power. Kim Jong Il visited China seven times in the last 11 years of his life, while Kim Jong Un has yet to meet with the Chinese President Xi Jinping. Many believe the Chinese President firmly dislikes the Supreme Leader. Recent talks between China and South Korea could accelerate the growing rift between China and North Korea. China may soon be unwilling to forgive a North Korean state headed by a leader who it does not trust.

While it is unclear whether regional pressure will be enough to prevent more North Korean tests, Chinese and South Korean negotiators would have certainly preferred it if the United States had not sent a naval strike group to the region. South Korea’s chief nuclear envoy Kim Hong-kyun said that the two countries did not discuss the possibility of an American strike on North Korea, but President Trump’s snap decision to bomb a Syrian air base late last Thursday, as well as recent statements by both Trump and his Secretary of State Rex Tillerson, have put many on alert.

Even if the fleet’s deployment was a symbolic display of power, there is a good chance the simple presence of a U.S. strike force will make matters worse. Whereas Kim Jong Un may have considered standing down in the face of Chinese sanctions, the arrival of a U.S. naval fleet could push him to order more tests.

Although China appears increasingly frustrated with Kim Jong Un, it is not yet willing to take actions that might threaten the future of the Kim dynasty or the North Korea state. Meanwhile, the United States is taking steps that are unbeknownst to those in the region, including South Korea. The international community is at least cursorily united against Kim Jong Un’s nuclear ambitions but has yet to form a combined front. The messy and disjointed way in which international actors are approaching North Korea may well rile up Kim Jong Un and push him to lash out.

Callum Cleary
Callum is an editorial intern at Law Street. He is from Portland OR by way of the United Kingdom. He is a senior at American University double majoring in International Studies and Philosophy with a focus on social justice in Latin America. Contact Callum at Staff@LawStreetMedia.com.
Share:
Related ItemsChinaKim Jong IlKim Jong-UnNorth KoreaNuclear TestsNuclear WeaponsSanctionsSouth KoreaTrumpXi Jinping