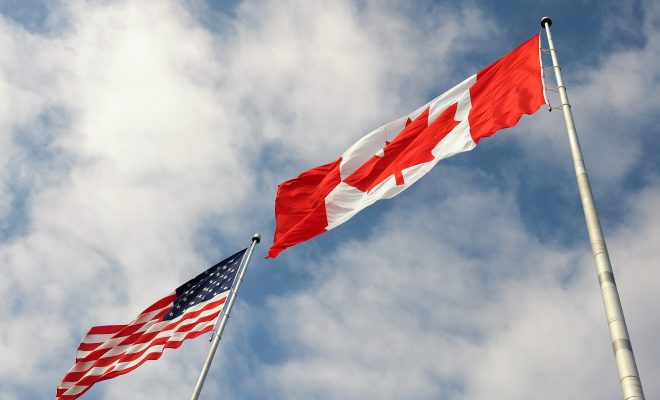 The Other Border: Pushback Against Illegal Immigration in Canada

As the Trump Administration cracks down on illegal immigration in the U.S., immigrants have been crossing the border into Canada. In 2016, 1,222 immigrants fled the U.S. to Quebec alone–a fivefold increase from prior years–and there have been similar spikes in British Columbia.

Stories of frostbitten immigrants crossing into remote, unmarked border towns this winter garnered international attention and set conservative Canadians on the warpath, demanding stricter regulation of the border. But the rise of illegal immigration has also led to calls for alterations to (and even the repeal of) the Safe Third Country Agreement, which states that refugees must apply for asylum in the first country they arrive in. Many immigrants who were hoping to seek shelter in the U.S. are crossing into Canada illegally because they believe their asylum claims will be denied in the U.S. but upheld in Canada. If the act was repealed or suspended, immigrants could request asylum at official border crossings and enter the country legally.

In the Justin Trudeau era, Americans tend to glamorize Canada as the last moral outpost on the continent but the nation is not quite the united front we assume it to be. According to a Reuters/Ipsos poll released this week, nearly half of respondents want to send illegal immigrants crossing the Canadian border back to the U.S. and a similar number of respondents disapprove of how the government is handling illegal immigration. The subsets that were most in favor of deportation were men, adults without a college degree, higher income individuals, and older individuals. This is by no means a perfect representation of Canadian attitudes. Yet in an era where xenophobia is encouraged and even enshrined by executive orders, it’s important to keep an eye on shifts in public opinion.

The U.S.-Canada border has historically been a “soft” one but as illegal immigration rates climb, Canada appears to be moving slowly toward a more hardline stance. Trudeau has defended proposed legislation that would allow U.S. customs agents to question, search, and detain Canadians on Canadian soil. Trudeau publicly stated in February that the government would not take steps to quell irregular migration–yet by giving more power to U.S. customs agents, he is essentially passing the buck. Policing the border is a cooperative effort between the two countries and if Trudeau steps away from that responsibility, he will be enabling the Trump Administration.

Trudeau met with Trump earlier this year in a carefully coordinated encounter that let Trudeau hold strong on all of his positions without actively attacking Trump. While it is diplomatic common sense not to antagonize an ally, Trudeau could take a stronger stand against the Trump Administration through legislative action–such as scrapping the Safe Third Country Agreement. Trudeau has done outstanding work with the Syrian refugee population, striving to fast-track their entry into Canada so that tens of thousands of Syrian refugees have now been granted asylum in Canada–but can he keep it up?

Jillian Sequeira
Jillian Sequeira was a member of the College of William and Mary Class of 2016, with a double major in Government and Italian. When she’s not blogging, she’s photographing graffiti around the world and worshiping at the altar of Elon Musk and all things Tesla. Contact Jillian at Staff@LawStreetMedia.com
Share:
Related ItemsAsylumCanadaIllegal ImmigrationImmigrationJustin TrudeauRefugeeTravel BanTrump