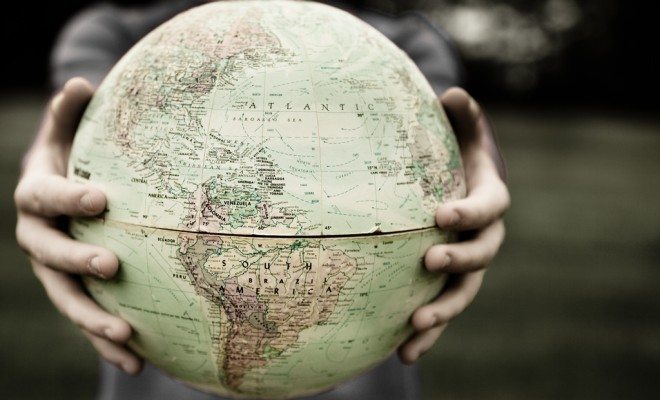 Can a Flag of Planet Earth Unite the World Beyond National Boundaries?

For millennia, flags, banners, and standards have been points under which causes have coalesced and people have united. Now the entirety of Planet Earth and all of its inhabitants may have a single flag to call our own.

Oskar Pernefeldt, a student at Beckmans College of Design in Stockholm, Sweden, has created a banner to represent the entire human civilization and the rock we inhabit. It features simply seven interlocking rings on a blue background. Pernefeldt envisions this flag on the flight suits of astronauts, being waved at sporting events, or being hung outside one’s home.

On the official website, Pernefeldt points out that space missions thus far have represented the particular nations that have launched them; but such actions are representative of Planet Earth itself. One might further this argument by pointing out the collaborative nature of such things as the International Space Station, or the rise of private space agencies that do not necessarily have a nationalistic agenda. In addition, Pernefeldt feels that this flag would be the most suitable one to headline the possible Mars colony in the near future.

While the grand symbolism of the flag suggests an end to the squabbles and struggles that have plagued human civilization for so long, to be replaced with a harmonious and symbiotic cooperative way of life for all civilization, the more immediate practicality of the flag with regard to space missions is evident. Supposing, in our ever increasing and geographically expansive travels into the depths, we encounter other life that asks from whence we came, Pernefeldt poses hypothetically. We would simply point to the Earth, as opposed to attempt a complicated explanation of national divisions and identities. A resident of another planet may not immediately care with what subdivision an Earthling identifies himself, but simply what planet.

There are strong environmental themes and metaphors in the flag. The seven rings represent the seven continents and, as the designer explains, they form a flower at the center, which is a symbol for life on Earth. Further, the rings are connected to each other, demonstrating the interrelatedness of everything on the planet. Finally, the blue stands for the oceans. Yet the structure is such that the seven rings together can be looked at as the planet itself, and the background the Universe.

Many national flags represent that nation’s history and heritage. The stars and stripes of the American flag are an obvious example, remembering the original colonies and the present states. Considering the diversity of the inhabitants of Planet Earth, pinpointing an international identity is quite a challenge. One thing that we all share is the environment. The fragile Earth and its ecosystems are a concern with which everybody is–or ought to be–involved. It is something that affects us all, and is a universal source of beauty, tranquility, and happiness. We all owe our existence and health to the bounties and life-giving forces of the environment.

The efforts to pursue more sustainable lifestyles transcend national borders, languages, and cultural barriers. It is something to which all people can aspire regardless of their religious or geographic orientation; embodying these themes in a planetary flag is an ingenious move. There are no moves to officially adopt this flag for its purpose, and there is likely much time before it ever could be planted on foreign cosmic soil in the name of a united human race. Yet it already sends a powerful message of cooperation in the name of environmental conservation. To these ends, it may already be a rallying point.

Franklin R. Halprin
Franklin R. Halprin holds an MA in History & Environmental Politics from Rutgers University where he studied human-environmental relationships and settlement patterns in the nineteenth century Southwest. His research focuses on the influences of social and cultural factors on the development of environmental policy. Contact Frank at staff@LawStreetMedia.com.
Share:
Related ItemsCountriesDivisionsEarthFlagHuman RaceInternational Space StationNationalismSpaceUnity