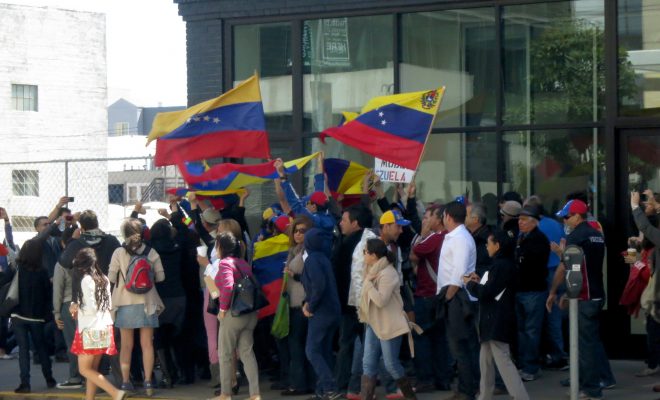 AP Investigation: In Venezuela, the Military Profits as People Starve

As Venezuelans take to the streets to protest a government that is failing to feed them, an investigation by the Associated Press found that the military has profited while the people starve. The military in Venezuela has controlled food distribution since last summer. In dozens of interviews, and in reviewing pertinent documents, the AP found that members of the Food Ministry and the military are involved in a graft scheme that enriches their coffers while boosting food prices past the point of affordability for many people.

The graft scheme, according to the AP, is conducted through various means. For instance, officials demand millions of dollars in kickbacks on import contracts. Officials demand bribes at highway checkpoints and at the port, sometimes keeping ships docked until a payment is made. One food vendor told the AP that he paid millions of dollars in bribes to government officials in exchange for contracts. He was able to afford the bribes by charging the state more than what the market price dictates.

“It’s an unbroken chain of bribery from when your ship comes in until the food is driven out in trucks,” said Luis Pena, director of Premier Foods, a company that imports food. At Puerto Cabello, a bustling port west of Caracas, customs officials are paid off when cargo is unloaded. Truck drivers delivering imported food to markets are sometimes forced to pay bribes at military checkpoints on the highway

One grocer told the AP that when he ran out of food, he went to an illegal military-run market, where corn flour was sold for 100 times its government-marked price. “The military would be watching over whole bags of money,” the grocer said.

In 2004, Hugo Chavez, the socialist president who passed away in 2013, created the Food Ministry, nationalizing Venezuela’s farms and factories, effectively handing food distribution to the state. Oil prices crashed in 2014, bankrupting the government, and forcing President Nicolas Maduro to import almost all of the country’s food supply. Now, nearly 90 percent of Venezuelans can’t afford enough food, and people are dying of starvation. Hospitals lack basic supplies, and some people are fleeing the country or foraging for food in empty lots and jungles.

U.S. prosecutors have taken notice of the graft, and some have launched investigations into Venezuelan officials who have been profiting off the country’s food crises. In addition, the world’s top three food export companies, all based in the U.S., have stopped doing business with the Venezuelan government. But parents continue to lose children who are driven to extreme measures to fill their stomachs, and the military’s graft scheme only deepens the suffering. Cliver Alcala, a retired general who helped oversee border security, told the AP: “food is a better business than drugs.”

Alec Siegel
Alec Siegel is a staff writer at Law Street Media. When he’s not working at Law Street he’s either cooking a mediocre tofu dish or enjoying a run in the woods. His passions include: gooey chocolate chips, black coffee, mountains, the Animal Kingdom in general, and John Lennon. Baklava is his achilles heel. Contact Alec at ASiegel@LawStreetMedia.com.
Share:
Related ItemsGraftHugo ChavezNicolas MaduroPovertyVenezuela