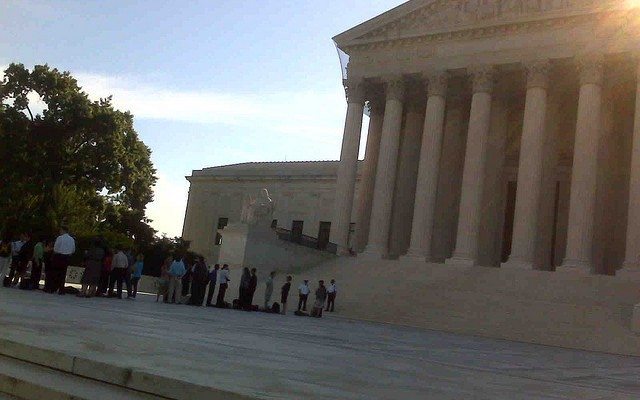 What SCOTUS’ McCutcheon Decision Means for the Future of US Elections

Get ready for even more money to enter politics. The Supreme Court overturned limits on federal political donations yesterday. In an election year in which every Representative and a third of the Senate is fighting to keep his or her job, expect this to be the year of record-breaking campaign donations. In a 5-4 decision along ideological lines, SCOTUS ruled that any caps and limitations on federal campaign donations are unconstitutional on First Amendment grounds. Whereas the infamous Citizens United v. Federal Election Commission ruling allowed for unlimited outside political spending by corporations, the outcome of McCutcheon v. FEC now expands unlimited contributions directly to politicians and their parties.

This does not mean that now every American can send in as much money as they want in a single check to their desired politician. An individual contribution in one check still stands at $2,600 per politico. What has been struck down, however, are the aggregate limitations per two-year cycle of $48,600 and $74,600 to candidates and parties, respectively. Now a donor has free reign in terms of the amount of checks they want to send within any given time frame.

In the majority ruling, Chief Justice John Roberts Jr. explained that even if there is popular sentiment that money corrupts the American political system, it is still protected under the First Amendment like other “repugnant” actions.

“Money in politics may at times seem repugnant to some, but so too does much of what the First Amendment vigorously protects … If the First Amendment protects flag burning, funeral protests and Nazi parades — despite the profound offense such spectacles cause — it surely protects political campaign speech despite popular opposition.”

Justices Scalia, Kennedy, Alito, and Thomas joined the Chief Justice in his majority opinion, with Clarence Thomas even going so far as suggesting all campaign contribution limits should have been struck down.

Justices Ginsburg, Sotomayor, and Kagan signed onto Breyer’s dissent authoring the call that “[the ruling] creates a loophole that will allow a single individual to contribute millions of dollars to a political party or a candidate’s campaign … The methods for using today’s opinion to evade the law’s individual contribution limits are complex, but they are well known, or will become well known, to party fundraisers.”

The case was brought forth by plaintiff Shaun McCutcheon, an Alabama Republican and CEO of Coalmont Electrical Development. Explaining how he was injured by the campaign limits put forth by the Federal Election Commission in an editorial he authored for Politico, he said, “Somehow, I can give the individual limit, now $2,600, to 17 candidates without corrupting the system. But as soon as I give that same amount to an 18th candidate, our democracy is suddenly at risk.” By arguing the unconstitutionality of campaign finance limits, McCutcheon set himself up to be included alongside legal precedent – and with this ruling he has guaranteed his name in the history books.

But does striking down campaign finance rules under the guise of a healthy democracy truly achieve that aim? As Breyer pointed out in the dissent, allowing more money to flow into the political system can only hurt it more but disenfranchising those who do not donate to their elected official. A report by the Campaign Finance Institute points out that in 2012, the cost of winning a seat in the House chamber was nearly $1.6 million. It is even worse for the Senate, where nearly 10 times the amount, $10.35 million, is needed to win a seat in that chamber. The average voter does not have the same “purchasing power” behind their contributions, as the majority of contributions come from the wealthiest individuals through their companies and organizations. According to OpenSecrets, an organization dedicated to campaign finance transparency, those who give $200 to a politician, political action committee, or party committee only represent 0.12 percent of the United States population.

Pay attention to how politicians and their bases raise money, as it can be expected in this crucial midterm election year to break records for the amount raised and spent. With a Supreme Court more apt to protecting the right of individuals and corporations to donate as much as they would like as frequently as they would like, it would seem that we are on a road to limitless campaign contributions.

Dennis Futoryan
Dennis Futoryan is a 23-year old New York Law School student who has his sights set on constitutional and public interest law. Whenever he gets a chance to breathe from his law school work, Dennis can be found scouring social media and examining current events to educate others about what’s going on in our world. Contact Dennis at staff@LawStreetMedia.com.
Share:
Related ItemsCampaignCongressCourtDemocratsFederalFinanceGovernmentPACPoliticsRepublicansSCOTUSSuper PACSupremeThe Money Blog