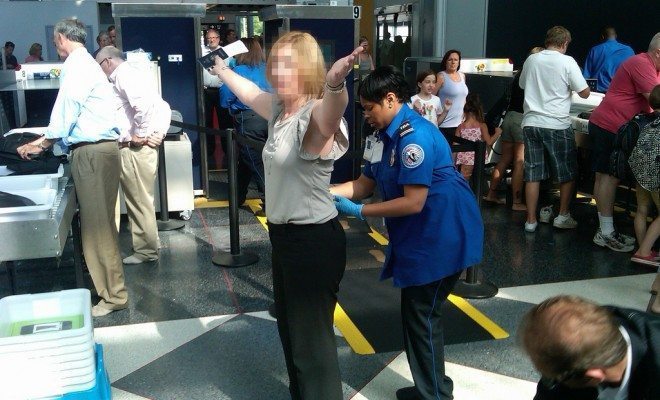 If you’re like me flying can be kind of scary. Yes, I am well aware of the fact that I am significantly more likely to die in a car accident than in a horrific plane crash. Unfortunately that morbid statistic does nothing to quell my intense phobia of heights combined with a general distaste for spaces that I can’t escape. It makes me nervous, playing with my hands and fidgeting more than unusual. According to The Intercept, I should stop doing all of these things because they are all quirks that TSA agents look for and classify as suspicious behavior via a designated point system detailed in a newly acquired TSA document.

This checklist is part of a controversial TSA program to identify potential terrorists based on behaviors that “indicate stress or deception.” The program is known as the Screening of Passengers by Observation Techniques, or SPOT. SPOT is operated by trained individuals known as ‘Behavior Detection Officers’ who observe and interact with passengers during screenings.

Nerves aren’t the only thing that can apparently make someone look suspicious to a TSA behavior agent. In the “Spot Referral Report,” a number of behaviors are divided into two categories: one point for “stress” factors and two points for “fear” factors.

Here are a few signs that TSA thinks might make you a terrorist:

Now some of the behaviors listed make sense–like bulges under clothes–but others like excessive yawning and arriving late for a flight are hardly out of the ordinary or threatening for that matter. There were also some that are just outright weird, i.e. “bulging adams apples.” Why?

Apparently this document was not classified, but rather closely guarded by the TSA. The Intercept only received a copy after a concerned source questioned the quality of the program.

I can understand why. Behavioral science has been critiqued as not being an actual science, and therefore unreliable. According to the article, the Government Accountability Office found that there was no evidence to support the idea that “behavioral indicators” can be used to determine if someone is a threat to aviation. GAO concluded that:

The human ability to accurately identify deceptive behavior based on behavioral indicators is the same as or slightly better than chance.

According to The Intercept, the ACLU sued TSA last week to obtain records related to its behavior detection programs, alleging that they lead to racial profiling. They could have a point. Using a checklist that makes almost any passenger susceptible to suspicion has the potential to be used as a catchall to interrogate or search any individual who is supposedly threatening. When racial stereotypes begin to come into play it is only a recipe for disaster. While airport security is a serious concern for Americans, programs like SPOT that depend solely on contrived behavioral factors is hardly reliable. In the mean time I’ll be mindful to keep my nerves to a minimum while going through airport security.

Alexis Evans
Alexis Evans is an Assistant Editor at Law Street and a Buckeye State native. She has a Bachelor’s Degree in Journalism and a minor in Business from Ohio University. Contact Alexis at aevans@LawStreetMedia.com.
Share:
Related ItemsAirport SecurityBehavior AnalysisBehavior ChecklistTerrorismTransportation Security AdministrationTSATSA agent