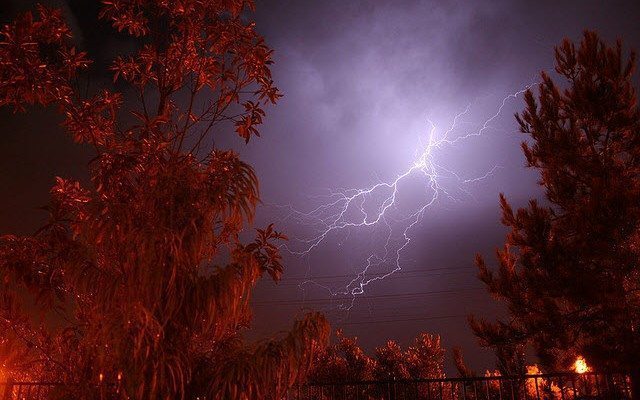 Everybody has an opinion about marijuana (and, as my cousin who is about to start his freshman year of college at the University of Colorado-Boulder will attest, they are not afraid to state that opinion when they learn someone is moving to a pot-legalized state.)

It can be a real lightening rod of controversy. No, really. It can actually be a lightning rod. And Jaroslav Kratky had to learn this the hard way.

The Lightning Round: A Quick Retelling of the Story

Where there is smoke, there is often fire. But sometimes the smoke and fire have nothing to do with each other. For example, let’s say that a bad storm caused a lot of lightning in a Florida town and when it struck, it caused some fires.

Now let’s say that while putting out said fires, a marijuana grow-house (i.e., the smoke) was discovered. Kratky would like for this all to have been a hypothetical story, but alas for him, it was all too real.

After the fire was put out and the police had obtained a search warrant, they confiscated 15 indoor plants, seven outdoor plants, and one large suitcase filled with packaged pot. All in all, 8.5 pounds of pot were brought into evidence.

As you might imagine, catching someone with this amount of marijuana leads to some charges. Kratky was arrested and charged with production/cultivation of marijuana within 1000 feet of a school or church as well as possession of over 20 grams of marijuana.

What could he possibly say to get out of that?

The expression throw mud at the wall and see what sticks, or whatever variation you know, basically means that if you don’t know if anything will work, just try everything and hope that something does.

Now, any good definition will also include an example to demonstrate it. Here is mine:

When Kratky was arrested after police found a lot of pot at his house, he needed a good defense but could not decide what to go with. So he decided to throw mud at the wall and see what sticks. In other words, he claimed all of the following.

(Parts of these were exaggerated for dramatic effect. However, I assure you, at their heart–meaning the texts in italics–these were all things Kratky tried to claim.)

Do you think any of that mud will stick?

I think if there was really one thing to learn in this story, it is that Mother Nature has no problem with being a tattle-telling narc. It doesn’t matter how well you keep your drug lair hidden, if she decides she wants to make you suffer, she will not hesitate to send out a smoke signal to the authorities, letting them know all about your whereabouts.

Now normally I would point out that if you were looking for a good place to start growing some weed, then Kratky’s house might be a great option. After all, I’ve heard that lightning never strikes the same place twice.

However, not only does this story teach us that we can’t trust Mother Nature, it also teaches us that the originators of this idiom do not know what they are talking about. Lightning can strike the same place twice. And I have proof.

The weekend before the pot was discovered, firepeople had been called to put out a boat that was on fire after having been struck by lightning. And, as I am sure you have guessed by this point, that boat was in the Kratky’s back yard.

After the boat was declared a total loss, the Kratkys were not that upset. After all, they said, the boat wasn’t worth anything. I wonder if they will have the same sanguine thoughts after this fire? Somehow I doubt it.

I guess if there is really one thing we can learn in this story is that it doesn’t matter where you go. It doesn’t matter how careful you are. If it is in your destiny to get caught, you will get caught one way or the other. So if you are doing anything illegal in your backyard, you might want to make sure you are doing it in a fire safe place. Good luck!*

*This is a fictitious good luck. I am in no way actually encouraging people to do illegal things and wishing them real luck in their efforts.