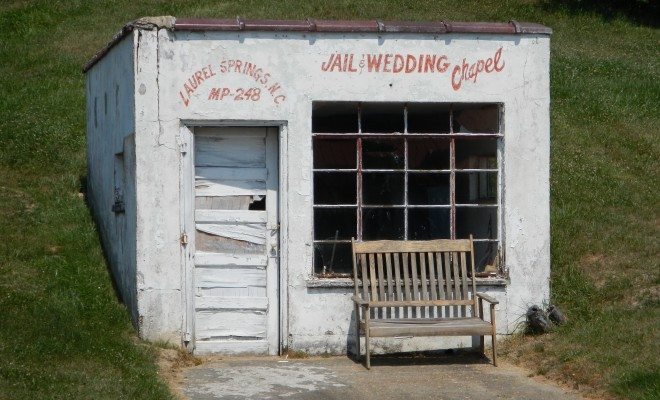 Need a Reason to Wed? Judge Rules “Get Married or Go to Jail”

It has been said that having a wife is like having a ball and chain, which isn’t the most flattering description of women. However, I now have definitive proof that, when push comes to shove, men actually will choose a lifetime of marriage over even a short jail term. Thanks, Judge Randall Rogers!

How did Rogers create this much needed proof? Why, by giving out a sentence unlike any other, of course.

How I Married Your Mother: The Romantic Tale of Josten Bundy and Elizabeth Jaynes

I like to picture Josten Bundy, currently 20, one day sitting his son and daughter down, “How I Met Your Mother” style, and telling his kids the true tale of his marriage to their mother.

“Now kids, it all started in March of 2015…” he will start to say while his kids roll their eyes because they are well aware their parents didn’t get married until August of 2015, so why was this story starting in March? They could already tell it was going to be a long one.

However, unlike Ted’s unnecessary additions to the mother of all stories, Bundy’s tale really did begin in March. That’s when he got into a fateful altercation with his girlfriend’s ex-boyfriend. Because assault is a crime, especially when it results in bodily injury, the young man was arrested.

However, he would not go before a judge for several more months. Let’s just skip ahead to then: he was found guilty.

The Rule of Love: A Highly Unusual Sentence

Randall Rogers does not only have an unusual name, he also has an unusual style of judgment. Take, for example, his ruling on the Bundy case. He sentenced Bundy to 15 days of jail for his assault charge.

Wait! That seems pretty normal. What’s the catch? Well, unlike some judges who like to lay down the law and expect it to be followed, Judge Rogers believes in a little bit of freedom in his punishments. Thus, he actually let Bundy choose.

b.) marry his girlfriend within 30 days, write some bible verses, and go to counseling (you know–to prove that getting in a fight over her was worth it or something).

That’s right–Bundy married his girlfriend because he was required to do so by the court. It’s weird when the whole “write bible verses” as a legal punishment thing gets so outshadowed in a ruling as to be barely mentioned in the story, but there we have it.

Wait, What? Everybody Else’s Opinions on This Matter

Guess what? The people involved in this account, except presumably the judge, felt like it was a really weird ruling.

While Bundy and Jaynes did choose marriage, because they were planning on getting married one day anyway, they were not happy about not getting to plan the wedding themselves, and Jaynes didn’t even have a white dress.

Jaynes’ dad had doubts that it was legal for a judge to force his teenaged daughter into marriage to pay for a crime she didn’t even commit.

I guess it’s too late now, though, that knot has been legally tied.

(Also, with a punishment like this, are you allowed to ever get divorced? Or do you only have to remain married for 15 days? Or can you say I do then immediately say I don’t? What are the logistics required here to avoid reverting to a jail sentence?)

The Moral of the Story

Let this be a lesson to you, kids. One fight, and your whole life can be changed. In fact, if you know someone who gets into a fight, your whole life could change. So never fight, and also don’t become acquainted with people who might get in a fight.

That way, you won’t be forced into any marriages.