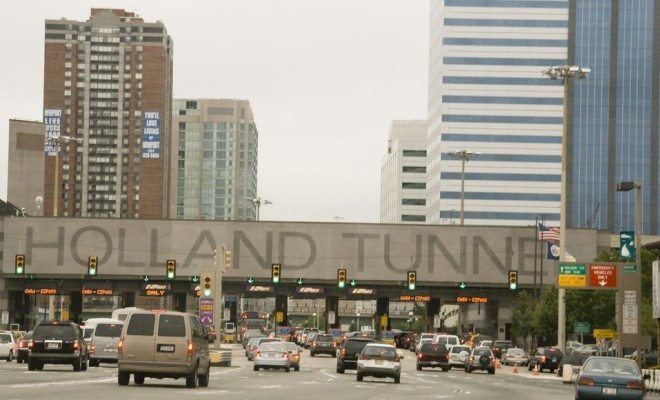 The Dumbest Laws of the United States: New York and New Jersey

Perhaps New York and New Jersey thought they had dodged the bullet of all of the poking fun that is about to occur in this edition of The Dumbest Laws of the United States. Sorry guys, it’s only fair that we point out the dumbest laws in ALL of the states, right? Which one of you two states wants to take the hot seat first? No volunteers? Fine….

I have to give props to New York for having surprisingly few dumb laws. Fear not, however, as I was able to find a couple. Firstly, “it is illegal to congregate in public with two or more people while each wearing a mask or any face covering which disguises your identity.”

Planning a trip to New York in the hopes of scoring potentially famous chicks? Well, you better not be married and cheating on your spouse, as adultery is still illegal there.

In Kendall, New York, “it is against town ordinances to camp out on your own land more than 72 hours a month. If you want to camp out for two weeks you need a permit, which can only be obtained once a year.” I guess lawmakers there frown upon the joyous act of camping!

There were many other laws listed, unfortunately I couldn’t find any legal verification for them, including the one claiming that the penalty for jumping off a building is death. Another law about which I am rather suspicious claims that “women may go topless in public, providing it is not being used as a business.”

Oh man, I should’ve known to start with New Jersey! That small state on the East Coast boasts an impressive amount of stupid laws. It’s to the point where I don’t even know where to start! I’ll just kick it off with laws regarding driving or vehicles in any way. In New Jersey, “drivers must warn those who they pass on highways before they do so.” If the chosen warning method is honking, that must get a bit noisy on the highway. It will get noisy in neighborhoods too, as “all motorists must honk before passing another car, bicyclist, skater, and even a skateboarder.”

I wonder if the law applies to cats?

Continuing the topic of cars, if you wish to buy one on a Sunday you’ll be SOL, as car dealerships are forbidden to be open on Sundays. If you already have a car and need to top off your gasoline stores, you better not try and fill your tank yourself, as doing so is also against the law.

They celebrate some er…interesting…. holidays in New Jersey. The third Thursday of October is  “New Jersey Credit Union Day” and therefore the citizens of the state must observe the day with “appropriate activities and programs.” With, of course, no suggestions for what activities they should do! I know that New Jersey Credit Union day is enough to have all of you ready to ditch your lives and move there, but it gets even better. In an attempt to make its citizens be nice to each other, the month of May has been designated “Kindness Awareness Month.” Ah, mandated kindness. That’s the best, most authentic kind! All of New Jersey during Kindness Month?

One dumb law that seemed somewhat rational to me was that spray paint may not be sold without a posted sign warning juveniles of the penalty for creating graffiti. Fair enough. They may as well know all the possibilities. Speaking of minors, in New Jersey handcuffs must not be sold to them. What if they are kinky 18-year-old teens and go to an adult store to buy some fuzzy ones?

The law “It is illegal to wear a bullet-proof vest while committing a murder,” seems to forget the fact that the murder is being committed. I believe that someone dead set on murder wouldn’t really be concerned with laws about what they can and can’t wear. Speaking of emergencies, one must yield a phone line to a person if it is an emergency. “Gimmie your cell phone, I’m starving, it’s an emergency, can I order takeout? Thanks bro.” Does that count?

Because I’ll probably end up giving it to you to BORROW for your next emergency!

In Blairstown, New Jersey, shooting ranges are outlawed, no street-side trees may be planted that “obscure the air” (don’t even get me started on this one), and it is illegal to throw ashes on the sidewalk. I have to wonder if it means all ashes, like from a cooking project gone wrong, an urn, or a cigarette? Clarify, people!

Phew, thus concludes a nice and wordy edition of The Dumbest Laws of the United States!

Marisa Mostek
Marisa Mostek loves globetrotting and writing, so she is living the dream by writing while living abroad in Japan and working as an English teacher. Marisa received her undergraduate degree from the University of Colorado in Boulder and a certificate in journalism from UCLA. Contact Marisa at staff@LawStreetMedia.com.
Share:
Related ItemsDumb LawsNew JerseyNew YorkStupid LawsWeird Laws