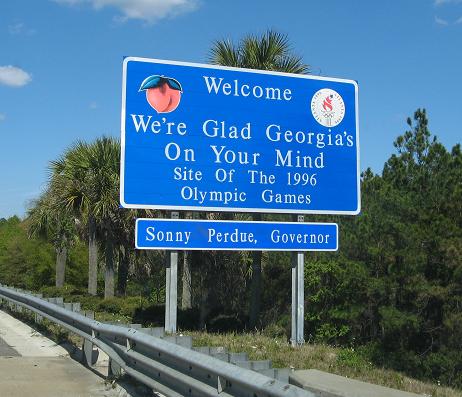 Image courtesy of [Shark96z via Wikipedia]

Florida has so many moronic laws that it could almost take up an entire post by itself.

The popular college spring break destination features some rather entertaining laws, for example one prohibiting committing “unnatural acts” with another person. Gotta love those vague terms! Furthermore, unmarried couples may not commit “lewd” acts and live together in the same residence.

If you wish to get around via a swamp buggy, a very popular mode of transportation in Florida, be aware that they are not included in the state’s definition of “motor vehicle,” and are thus not regulated.

Some lawmaker must have gotten sick of the lack of consistency regarding the direction that doors open, as they decided to make it a law that all doors open outward. I’m not sure if this law applies to airport bathrooms, but I always thought that it was irritating that they open inward when you are trying to close it around your suitcase once inside.

Even parents who are driven to the brink of insanity by their children’s actions may not sell their kiddos in Florida. Pigs can be confined in cages in Florida unless they are pregnant, in which case the law requires them to roam free.

Watch your mouth in Mississippi, where you could be fined up to $100 for using “profane language” in public places. And if someone is disturbing your spiritual experience in church, go ahead and arrest him or her. There, private citizens may personally arrest any person who disturbs a church service.

There are tons of laws relating to sexual relations, illegitimate children, and other similar topics in Mississippi. For starters, if someone is a parent to two illegitimate children, that person can go to jail for at least one month. Living together while not married or having sex with someone who is not your spouse results in a fine of $500 and/or six months in prison. Unnatural intercourse (whatever that even means), if both parties voluntarily participate, results in a maximum sentence of ten years and $10,000. Lastly on the sex topic, it is not legal to teach others what polygamy is.

Phew, those two states were a doozy, and we still have two more to go! Moving on to Alabama….

It’s a bit sad that this law had to be created, since it seems like a pretty commonsense thing to never do, but Alabama officially banned incestuous marriages. Another one that confuses me as to why it needs to actually be written into law is that driving blindfolded is illegal.

If you plan to attend a bear-wrestling match in Alabama you’ll have to change your plans as they are strictly prohibited. Also, beware that impersonating a person of the clergy is against the law, as is maiming yourself to get out of duty or to obtain alms. People whose preferred pastime is playing Dominoes will have to come up with an alternative game for Sundays as playing that particular game on that particular day is illegal.

As is the case with Florida, Georgia has almost enough dumb laws to warrant an entirely separate post, so I’ll try to keep it concise. Do you have a life goal to live on a boat in Georgia? Too bad. You cannot live on a boat for more than 30 days during the year. No getting kinky on boats there either, as sex toys are banned.

Not for 30 days in Georgia, you’re not

In Acworth, Georgia there must be mass amounts of leaves covering the ground during the Fall months, as residents there are required by law to own a rake. Athens-Clarke County takes the cake for the strangest laws in the state, though. There, adult bookstores may not sell alcohol. Didn’t think that was generally a place people flock to for booze, but what do I know. I also wasn’t aware of anyone venturing to a massage business for his liquor, but Athens-Clarke County felt the need to ban that as well so who knows. Yeah, lots of weird stuff with alcohol. It is also illegal to sell two beers for a single price as a deal. For example, “a bar can’t run a two Bud Lights for $5 special.”

There are some bizarre curfew laws in Athens-Clarke, where one may not read a book out loud in public after 2:45 AM and persons under 16 may not play pinball after 11:00 PM. Bummer for them, because 11:00 PM is prime pinball time.

Marisa Mostek
Marisa Mostek loves globetrotting and writing, so she is living the dream by writing while living abroad in Japan and working as an English teacher. Marisa received her undergraduate degree from the University of Colorado in Boulder and a certificate in journalism from UCLA. Contact Marisa at staff@LawStreetMedia.com.
Share:
Related ItemsAlabamaDumb LawsFloridaGeorgiaMississippi