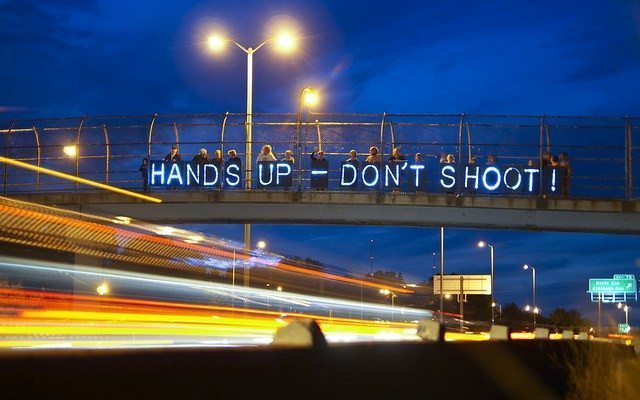 Writing about technology and its many uses has never been more important to me than today.  The civil disobedience, sadness, and anger expressed in Ferguson, Missouri by its residents and sympathizers would most likely have gone unnoticed by the majority of the nation if it weren’t for social media outlets like Youtube, Twitter, Vine, and Facebook.  To attribute the proper value to these technologies, we must first identify the root cause of the demonstrations which have led to a militarized police force and the enforcement of pseudo-martial law.  This post in no way condones, encourages, or repudiates any of the methods used by law enforcement or protesters, nor does it seek to pass judgment on the incomplete police investigation concerning the death of Michael Brown.  Instead, this post will point out what has happened, and highlight the use of technology to keep the public informed when formal media outlets were unable to.

On August 9th, a recent high school graduate and prospective college student by the name of Michael Brown was killed by a member of the Ferguson Police Department.  There is much speculation surrounding the death, including the order of events leading to it.  Because an official investigation is ongoing, the only thing we know for certain is that Michael Brown, although unarmed, was shot and killed by a Ferguson Police officer.  The people of Ferguson, left heartbroken and mourning, decided to commemorate Michael’s death with a candlelight vigil in the same neighborhood where Mr. Brown was killed.  However, the Ferguson police made an appearance at the vigil, bringing with them police dogs and brandishing high powered assault weapons. In response, the crowds’ emotions turned from grief, to outrage, and escalated to protest as documented by Vine and Youtube uploads as well as Tweets and Facebook posts.

In the midst of the protests, a handful of opportunists taking advantage of high emotions and tension destroyed the property of privately owned businesses by looting, vandalizing, and setting said businesses on fire.  This small group of criminals turned a peaceful protest into a riot, causing the St. Louis County Police Department to take over law enforcement in the area by using a strategy of militarized policing.  Characterizing the entire group of protesters as looters and rioters led to the denigration of the entire protest. This allowed the looters to become scapegoats, which subsequently justified militarized police aggression.  The denigration of a group of people and scapegoating resulting in justified aggression are all characteristic of systemic oppression.

Whether knowingly or unknowingly, St. Louis County PD increased tension when it informed Ferguson residents that neither the autopsy nor the identity of the officer involved in the killing of Michael Brown, would be released to the public.  As protests continued, the peaceful crowds were met with heavily armored trucks and tanks, high powered assault rifles, snipers perched ready and waiting, tear gas, and rubber bullets. The protesters were told by police standing in front of tanks and using loudspeakers, that their right to peacefully assemble was not being denied.  Although a curfew was not set, police made it clear that they wanted protesters off of the streets by nightfall and used tear gas and rubber bullets to push non-compliant protesters back. In some cases, as documented by Vine videos, police shot tear gas canisters into residential areas, including the fenced in backyard of a protester that refused to go inside his home, although he was protesting on his own property.

Police detained journalists and shot tear gas at a news crew they saw filming them.  After the news crew ran away from their van and equipment to escape the tear gas, police were photographed removing their cameras and pointing them toward the ground so they could no longer record police activity.  This is where the pseudo-martial law comes into play. To be clear, martial law was at no time officially declared, but if it looks like a duck and quacks like a duck, then it’s a duck. Disallowing the press to report activity; intimidating protesters with visuals of military-like riot gear; requiring protesters that are peacefully assembling to return to their homes by nightfall; detaining reporters without cause; and the use of militarized police enforcement are all characteristics of martial law.

The use of militarized law enforcement has been noted and called into question by government officials on both sides of the political spectrum.  Outrage by people following the activity in Ferguson on social media forums was voiced both nationally and internationally.  Photos, Vine and Youtube videos, as well as tweets and Facebook posts were the source of the outrage that led to protests in major cities throughout the country and internationally in cities like London.  There was even advice given in the form of Youtube videos to protesters in Ferguson by Palestinians on how to stay protected from tear gas.  As a result of public backlash against militarized policing, the Governor of Missouri, Mr. Jay Nixon, announced that Missouri Highway Patrol would take over law enforcement in Ferguson, and try to set a different tone.

The tone set by Missouri Highway Patrol was one of peace and understanding. Captain Ronald Johnson described his personal connection to not only Ferguson but to the killing of Michael Brown. The change in police technique was noted by formal media outlets as well as social media postings which reported MHP officers walking with protesters instead of standing against them. These officers were not dressed in riot gear nor did they use methods such as tear gas or rubber bullets in their interactions with Ferguson protesters.  In addition, the Ferguson Police Chief has announced they will comply with one of the requests of the protesters, to release the identity of the police officer who shot Michael Brown. That identity was released earlier today.

Not only did social media keep the public informed of minute by minute occurrences in Ferguson, but social media users also pointed out what they believed to be disparities in formal media coverage with hashtags on Twitter and Instagram like #IfIWasGunnedDown.  This particular hashtag was used to show ways in which news coverage portrays black victims by displaying unflattering images as opposed to more positive looking images to influence character assassination of the victims.  Other hashtags like #Ferguson were used to allow social media users to quickly find information related to the Ferguson protests.  While social media is an amazing platform that can be used to inform the public, it also showed differing public opinions.  Some users voiced support for the use of military-like force against protesters and used the incident of looting as evidence for its need.  Others voiced disapproval that such force was being used and accused militarized police enforcement of inciting more anger among peaceful protesters.

It’s unclear what will happen in Ferguson but it should be appreciated that people were able to inform the public, voice their opinions, and urge a public discussion on topics such as race relations, militarized policing, civil liberties, police brutality, and what people consider to be justice or injustice.  Social media opened up the problems of a town with a population of 21,000 to the world, causing people to come together in solidarity and peaceful protest.  If it weren’t for the openness of the Internet here in the US, we may have never known what was happening in Ferguson.  Whether you agree or disagree with what is going on in Ferguson, we can all take heart in knowing we were all able to use social media and technology to be informed and come to our own conclusions.

Teerah Goodrum
Teerah Goodrum is a Graduate of Howard University with a Masters degree in Public Administration and Public Policy. Her time on Capitol Hill as a Science and Technology Legislative Assistant has given her insight into the tech community. In her spare time she enjoys visiting her favorite city, Seattle, and playing fantasy football. Contact Teerah at staff@LawStreetMedia.com.
Share:
Related ItemsFacebookFergusonFirst Amendment RightsIfIWasGunnedDownInstagramMichael BrownMissouriPeaceful ProtestsPolicePolice ForceProtestsTwitterVine