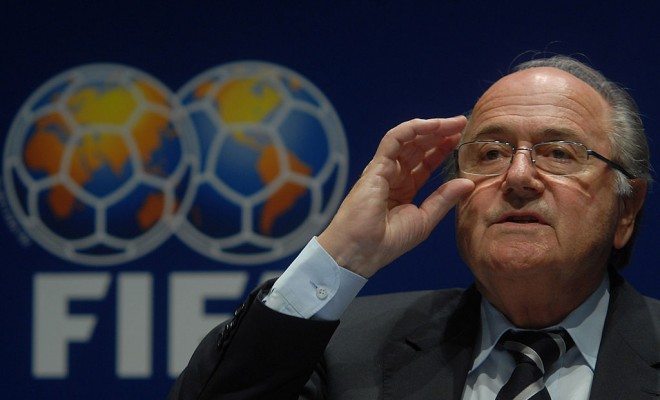 Sepp Blatter and the Nobel Prize: What is Putin Thinking?

According to Russian President Vladimir Putin, FIFA’s outgoing President Sepp Blatter deserves a Nobel Prize. Putin made these comments during an interview with Swiss broadcaster RTS that was released on Monday. These comments followed  Blatter and Putin’s gathering in St. Petersburg for the preliminary draw for the 2018 World Cup located in Russia. But Putin’s comments seem a bit odd, as there’s potential evidence that Blatter has been involved in suspicious or illegal activities for years.

After all, Blatter has had his fair share of attention this past year. Blatter’s 17-year-reign as FIFA president came to an end in June when he announced his resignation. His resignation came six days after the FBI announced it would be investigating some top FIFA officials. The FBI later announced it planned to win the cooperation of other FIFA officials who were under indictment and work its way up the organization.

During the interview, Putin stated

I believe that people like Mr. Blatter, the heads of major international sports federations, deserve special attention and gratitude from public organizations, if anyone should be awarded Nobel Prizes it is these people.

FIFA itself had a rough year as well. Last January, FIFA was hit with a lawsuit by several high profile female players after it announced the Women’s 2015 World Cup would be played on turf instead of grass like Men’s World Cups. In addition to the lawsuit, FIFA has struggled to maintain partners and sponsors after the announcement of the investigation into the potential corruption scandal. Last month, the Nobel Peace Center announced that it would stop working with FIFA on the joint fair play Handshake for Peace after the corruption allegations. After the severance of this relationship, it is hard to believe that the Nobel Peace Center would agree with Putin’s comments. While the Nobel Peace Center doesn’t directly say the relationship was severed because of the allegations, it’s a popular and believable theory.

While Blatter denies any wrongdoing, that’s a bit hard to believe given his abrupt resignation and the indictment of his former colleagues. However, Putin seems to be convinced of Blatter’s innocence stating:

We all know the situation surrounding Mr. Blatter right now, I don’t want to go into details, but I don’t believe a word of him being involved in corruption personally.

I question Putin’s ability to judge someone’s innocence given his recent activities (Ukraine comes to mind), but since Blatter isn’t being personally investigated by authorities, that could be part of Putin’s reasoning.  Currently, Swiss and U.S. authorities are investigating whether the 2018 and 2022 World Cup bids were accepted through legal means, but Putin has voiced his concerns about those investigations, particularly the U.S. role.

While Blatter is not currently being investigated by U.S. or Swiss authorities, many believe he may be at least somewhat involved in the scandals. Dyke, the head of FA, stated

I don’t believe Mr. Blatter’s decision to step down was an ethical decision. I suspect it is much more to do with the investigations that are going on, clearly something has terrified him.

Although Blatter has many awards and served FIFA for 17 years as president, he is in no way qualified to receive a Nobel Prize. In fact, given that the Nobel Prize is only given in Chemistry, Peace, Physics, Physiology, Literature, and Medicine, Putin should have specified what award Blatter is actually qualified for.

The 2015 Nobel Prize winners have yet to be determined, and Blatter will likely remain in office  until his successor takes over. However, his role in the potential corruption investigation has yet to be determined, creating skepticism around his legacy and role at FIFA, and a huge question mark when examining Putin’s statements.

Jennie Burger
Jennie Burger is a member of the University of Oklahoma Class of 2016 and a Law Street Media Fellow for the Summer of 2015. Contact Jennie at staff@LawStreetMedia.com.
Share:
Related ItemsFIFAFIFA Corruption ScandalNobel PrizeSepp BlatterVladimir Putin