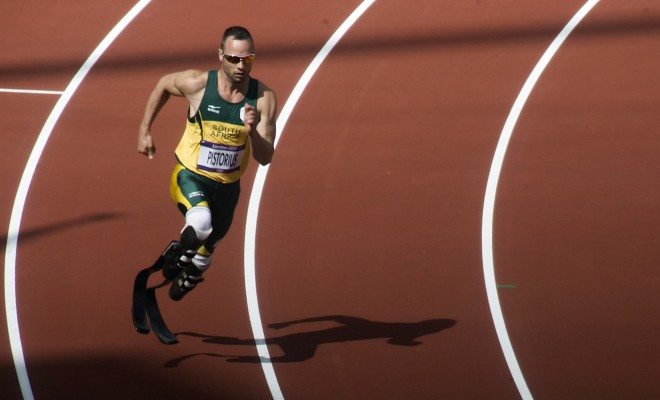 Pistorius Can Opt for House Arrest in Just 10 Months

Time and time again, celebrities have evaded prison sentences because they claimed to be too fragile for life behind bars. In the case of recently tried and convicted Olympian Oscar Pistorius, he may be able to serve just ten months of his five-year maximum for shooting and killing his then-girlfriend Reeva Steenkamp. After those ten months, he can request to be moved to house arrest in his mansion. That’s a rough life right there.

In Pistorious’ case, it’s a bit tricky. He is a double-amputee, and because of this, many claim that prison is simply not suitable for him. Nooshin Erfani-Ghadimi, project coordinator for the Wits Justice Project, a civil society group, said before the sentencing that she believed Pistorius would probably receive far better treatment than the average prisoner and has throughout the entire judicial process thus far. However, she also noted “I don’t think anyone with a disability necessarily will be able to be provided for at the moment in a way that ensures that they would have the correct medical treatment, that they have the correct physical structures.”

Pistorius’ prosthetic limbs are not the only issue. Health risks such as tuberculosis are often cited as a problem in South African prisons due to poor air circulation, and many fear that he will be susceptible to contracting the illness. Some believe that his celebrity status will make him a target for gang violence.

While defending his client, Pistorius’ attorney, Barry Roux, argued that there is extreme overcrowding in South African prisons. This point is irrelevant, however, as his celebrity status would easily prevent him from sharing a cell. The other health fears such as inmates not receiving their medication because of the inadequate number of health workers in prisons are unlikely to be of valid concern. He is a celebrity. History shows that celebrities receive special treatment in prison.

Currently, Pistorius is living in a single cell with everything he needs along with access to the medical care for any ailments both physical and psychological. In ten months, he will likely be permitted to move to his home in the Silver Woods Estate in Pretoria.

This case is undoubtedly tricky. If Pistorius did not have his celebrity status, his prison sentence would be of greater concerned because it would mean less special treatment behind bars. For example, a paraplegic man, Ronnie Fakude, struggled with very real concerns while serving a prison sentence; however, he did not enjoy the status as a famous individual the way that Pistorius does.

Just because you are in the media spotlight doesn’t make it okay to commit crimes, and hopefully this case will shed light on that fact, even though he is getting off relatively easily. Even Arnold Pistorius, Oscar’s uncle, said that the family accepted Oscar’s sentence and viewed it as a way for his nephew to pay back society. Perhaps in ten short months Mr. Pistorius can relax in the comfort of his own home again. Only time will tell…

Marisa Mostek
Marisa Mostek loves globetrotting and writing, so she is living the dream by writing while living abroad in Japan and working as an English teacher. Marisa received her undergraduate degree from the University of Colorado in Boulder and a certificate in journalism from UCLA. Contact Marisa at staff@LawStreetMedia.com.
Share:
Related ItemsBladerunnerCelebritiesDisabilityFameHouse ArrestJailMurderOscar PistoriusPistoriusPrisonTuberculosis