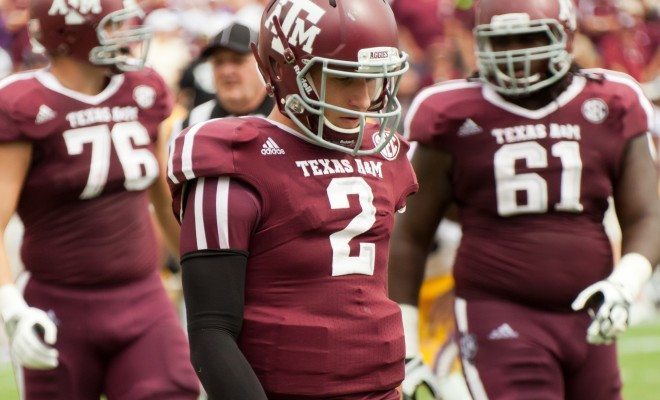 Courtesy of [Shutterbug459 via Wikipedia]

The NCAA’s amateurism rule is rubbish. On its website, the college athletics governing body claims it has “adopted amateurism rules to ensure the students’ priority remains on obtaining a quality educational experience and that all of student-athletes are competing equitably.” The page goes on to list all the things student athletes are not allowed to do under the principle of amateurism, including:

In the meantime, the University of Texas basketball program collected more than $165 million in revenue for the 2013-2014 season, according to the Office of Postsecondary Education. Forbes values its football program at a cool $139 million, while the NCAA as a whole made nearly $913 million for the fiscal year 2013.

If the NCAA is starting to sound like a cartel, that’s because it is. By definition, a cartel is an agreement between competing firms to fix prices. A long time ago, colleges got together and decided not to pay players, fixing the salaries of their student-athlete employees at zero for the benefit of NCAA and participating universities’ leadership.

So then, it becomes evident that the NCAA needs to get rid of its amateurism rule. Fortunately, the rule is already under assault in the court room.

In a March 2014 National Labor Relations Board decision, Regional Director Peter Sung Ohr ruled that a group of Northwestern University football players are eligible to form a union on the basis that players devote as many as 50 hours a week to football, and that scholarships, which can be terminated yea to year and require student athletes to adhere to certain guidelines, are a contract for compensation.

In an August 2014 California District Court decision, Judge Claudia Wilken ruled that “NCAA rules unreasonably restrain trade in the market for certain educational and athletic opportunities offered by NCAA Division I schools” in a case involving a former UCLA basketball star who claimed the NCAA and EA Sports violated his right to use his image for marketing purposes when his image was used in a video game without his consent and without compensation.

Nevertheless, there are numerous arguments against compensating student athletes.

Some argue that a vast majority of athletic programs at universities are losing money and need help from their basketball and football programs to stay afloat. Compensating student athletes, they contend, will force athletic departments across the country to cut programs.

Tough luck. We live in a capitalist society where businesses close every day because they fail to make a profit. If a university believes that maintaining these programs leads to more donations from alumni, fine, fund them through donations. But student athletes contributing to profitable programs should not be punished for the financial woes of their unprofitable counterparts.

No, they don’t. In a Drexel University and National College Players Association study, the average Division I college basketball player would earn $266,000 per year, and the average Division I football player would earn $114,000 per year, if players received 50 percent of the revenue earned by their respective programs, which is approximately the revenue sharing model of the NBA and NFL.

Still, others argue that high school athletes have the right to decide whether or not they want to accept a scholarship and be bound by NCAA regulations.

Well, the NBA enforces a 19-year age minimum for draftees, and the NFL requires its draftees to be three years removed from high school. With the emergence of European and Chinese leagues, some high school basketball stars have opted to spend their last years of ineligibility abroad. With no comparable foreign football leagues, football stars are out of luck.

There is yet another denomination of people who argue that the NFL’s three-year rule protects young athletes who are more susceptible to injuries such as concussions.

In most states, minors become legal adults at the age of 18, and the legal age of consent is 16. High school football players are well aware of the risks associated with playing the sport, and they should have the option to get paid millions of dollars to take on the higher risks of playing professionally with better athletes, or receive scholarships and develop their skills in a less physical college setting.

Consequently, the most sensible solution to the NCAA amateurism problem is for the NBA and NFL to eliminate their age requirements. Unfortunately, college athletics function as a phenomenal developmental league for professional leagues that professional franchises do not have to pay for.

So, as long as these age requirements are in place, amateurism in college athletics is dead. The NCAA needs to stop pretending that its student athletes are students first, athletes second, and open up its leagues to all the intricacies of the free market.

Doing so may involve sports agents that specialize in college athletes, or a free agency period where eligible players can transfer to other universities. The market will invariably take many twists and turns before it settles into a final model, but it will certainly be better than a system in which a cartel blatantly exploits the services of helpless college athletes.