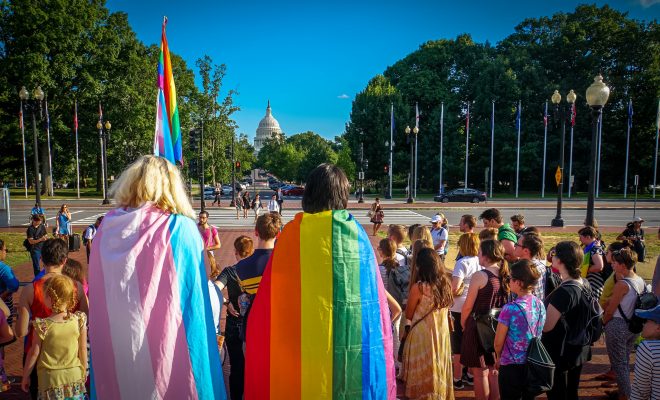 Trump Announces Ban on Trans People Serving in the Military

In a surprise series of tweets this morning, President Donald Trump announced a new military policy. Per Trump’s tweets, he plans on banning trans people from any and all military service.

After consultation with my Generals and military experts, please be advised that the United States Government will not accept or allow……

….Transgender individuals to serve in any capacity in the U.S. Military. Our military must be focused on decisive and overwhelming…..

….victory and cannot be burdened with the tremendous medical costs and disruption that transgender in the military would entail. Thank you

It’s unclear which “generals and military experts” he consulted with, but this announcement marks a major departure from current military policy. Last year, it was announced that trans individuals would be able to serve openly in the military. It’s also unclear what will happen to trans people already serving. Exact numbers are, understandably, hard to quantify, but it’s believed that approximately 1,320-6,630 trans Americans currently serve. But their medical care, which Trump cites as the reasoning for precluding them from service, contributes to a miniscule percentage of Department of Defense health care expenditures. Estimates put caring for trans people in the military anywhere from $2-8 million. For context, the DoD’s total yearly health care spending is to the tune of $50 billion.

There are a lot of details still to come, but right now, it seems clear that this move was at least partly political:

Just spoke to a Trump administration official about the transgender military decision. Here’s what they said… pic.twitter.com/eOWdvlxTfd

Anneliese Mahoney
Anneliese Mahoney is Managing Editor at Law Street and a Connecticut transplant to Washington D.C. She has a Bachelor’s degree in International Affairs from the George Washington University, and a passion for law, politics, and social issues. Contact Anneliese at amahoney@LawStreetMedia.com.
Share:
Related ItemsAfghanistanBanGossipIPJack ReedKylie JennerLGBTQSusan CollinsTalibanTrans*Trump