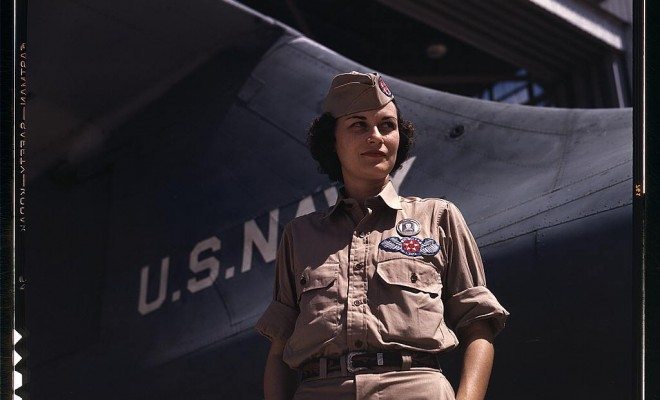 Image courtesy of [The Library of Congress via Flickr]

When we take a moment to think about women in combat, oftentimes a picture of the 1997 Demi Moore film, “G.I. Jane” comes to mind with a scene that looks a little something like this:

However, women have not been allowed to work in all combat units despite G.I. Jane’s portrayal implying it was possible…that is, until December 3, 2015.

“There will be no exceptions,” stated Defense Secretary Ashton B. Carter in his announcement, during which he informed United States officials and citizens that women would be able to hold positions and jobs within all combat units of the military. Secretary Carter went on to address that women would have these opportunities so long as “they qualify and meet the standards,” marking a significant and positively well-earned turn in the tide for the rights of women within the military.

The breaking and encouraging news comes on the heels of the first two women, Kristen Griest and Shaye Haver, who graduated the grueling Ranger training on August 21, 2015 and were not allowed to join a combat unit following their training and the acquisition of their new titles like their male counterparts. Now, for the likes of women like Ms. Griest and Ms. Haver, they will finally have the well-deserved opportunity to put their training into practical use.

The secretary excitingly highlighted the ability of the military to utilize a level of skill, insight, and point of view that had yet to infiltrate combat units thus far–the sensible woman’s touch, if you will. Secretary Carter was supported by all of the top leaders in the Army, Navy, and Air Force in his decision, but met negotiating terms by the Marines in which he refused to indulge special requests or exceptions, stating that his decision would apply to all branches of the military equally.

General Joseph Dunford, a commandant in the Marines, provided the Secretary with a detailed recommendation and data pertaining to mixed-gender units versus all-male units, showing that women were more likely to get injured in the training process and did not perform better than the men. However, Secretary Carter was not swayed, due to his own “evidence-based” research, and found that mitigating factors during the implementation process would account for any of the issues outlined by the Marines. General Dunford was not present for the announcement, but the secretary assured that the general would take full part in the implementation process.

So how exactly will this change be implemented?

That seems to be the question that everyone is pressing Secretary Carter to answer. The secretary has not provided a concrete answer. However, he has provided a timeline: January 1, 2016 is the due date for plans to be submitted on how to open up the combat jobs to women and April 1, 2016 is the date by which those plans have to start being integrated into military procedure. We will have to wait for the start of the New Year to see how plans and integration unfold.

Now up for debate–will women be subject to the draft as a consequence of participating in combat units and what is the constitutionality of the decision if they are not?  Women, ages 18-26, are the only group entirely exempt from the military draft under the Military Selective Service Act–even non-U.S. citizens, such as male refugees between the ages of 18-26, are subject to the draft in a time of war when troops are short-handed. The Military Service Act’s constitutionality was challenged under the Fifth Amendment in Rostker v. Goldberg. The Supreme Court upheld its constitutionality finding that Congress acted within its constitutional authority to raise and regulate armies and navies when it proposed and authorized the registration of men and not women. Justice William Rehnquist, in authoring the opinion, noted that Congress’ decision to exempt women from registering for the draft stood as women were not in combat at the time. Justice Thurgood Marshall dissented in Rostker, stating that the exemption “categorically excludes women from a fundamental civic obligation.” Since the combat restrictions no longer exist, the issue may be revisited in legal dispute as a violation of the Equal Protection Clause within the Fifth Amendment.

So we wait. We wait for the plans and implementation to unfold and to see if a constitutional challenge is brought against the Military Service Act in light of Secretary Carter’s decision to open combat unit jobs to women.

But while we wait, we can share in Rep. Martha McSally’s (R-Ariz.) sentiments on the underlying change in combat units:

It’s about damn time…Women have been fighting and dying for our country since its earliest wars. They have shown they can compete with the best of the best, and succeed. We are a country that looks at people as individuals, not groups. We select the best man for the job, even if it’s a woman.”

Ajla Glavasevic
Ajla Glavasevic is a first-generation Bosnian full of spunk, sass, and humor. She graduated from SUNY Buffalo with a Bachelor of Science in Finance and received her J.D. from the University of Cincinnati College of Law. Ajla is currently a licensed attorney in Pennsylvania and when she isn’t lawyering and writing, the former Team USA Women’s Bobsled athlete (2014-2015 National Team) likes to stay active and travel. Contact Ajla at Staff@LawStreetMedia.com.
Share:
Related ItemsAshton B. CarterCombatEqualityGender GapPentagonPoliticsU.S. MilitaryWomen's Rights