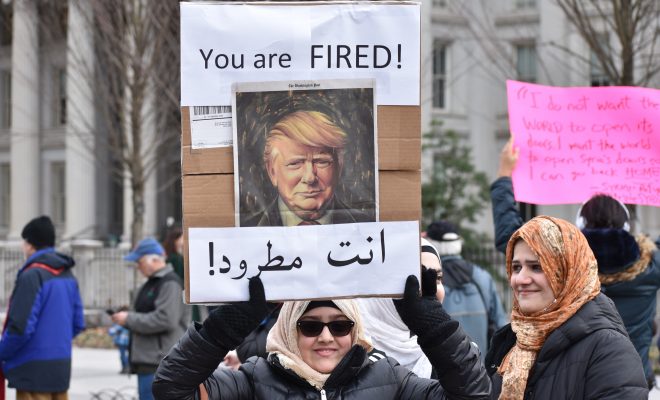 Refugees from around the globe, and visa-holders from Syria, Iraq, Iran, Yemen, Libya, Sudan, and Somalia can once again travel to America–for the time being, at least. The window of relief came courtesy of James Robart, a federal district court judge in Seattle, Washington. On Friday, Robart granted a temporary restraining order on President Donald Trump’s recent executive order travel ban, which barred travelers from the seven aforementioned countries–refugees and visitors alike–for various amounts of time.

Trump responded to the injunction by taking the case to federal appeals court–and by tweeting:

The opinion of this so-called judge, which essentially takes law-enforcement away from our country, is ridiculous and will be overturned!

While tweeting obviously does not have constitutional authority to overturn the opinion of a federal judge, an appeals court does. But the U.S. Court of Appeals for the Ninth Circuit in San Francisco did not re-instate the travel ban; instead it ordered the Trump Administration to file a brief defending the executive order by Monday at 3 p.m. In its emergency motion filed with the appeals court, which was denied, the administration wrote:

The injunction contravenes the constitutional separation of powers; harms the public by thwarting enforcement of an Executive Order issued by the nation’s elected representative responsible for immigration matters and foreign affairs; and second-guesses the President’s national security judgment about the quantum of risk posed by the admission of certain classes of aliens and the best means of minimizing that risk.

However the appeals court decides to rule on the motion, the losing side, either the Trump Administration or the states of Washington and Minnesota, which filed the initial lawsuit, will likely bring their case to the Supreme Court. In the meantime, Trump continues to lash out at the “so-called judge” Robart, Trump’s surrogates were dispatched to defend him, and Republican and Democratic politicians responded to the president’s apparent disrespect for the judicial branch.

On NBC’s “Meet the Press,” Vice President Mike Pence said Trump has “every right to criticize the other two branches of government.” He added that Trump and millions of Americans “want to see judges that will uphold the law and recognize the authority the president of the United States has under the Constitution to manage who comes into this country.”

In its emergency motion, the administration cited the Immigration Act of 1952 (amended in 1965) as “the framework for deciding which aliens may enter and remain in the United States.” This law, the administration said, gives the executive branch the authority to determine who is welcome to come to America, for refuge or for a visit.

The 1965 law was passed to undo America’s past quotas on immigrants from certain countries, notably Arabs, Africans, and European Jews fleeing the Holocaust. The law broadly established the current procedure for resettling refugees and welcoming immigrants, and the Trump Administration is likely to point to it as proof of the president’s authority to make immigration-related decisions.

As Trump continues to decry the federal courts (“just cannot believe a judge would put our country in such peril,” he tweeted on Sunday), Democrats and some Republicans are defending judicial authority. Sen. Mitch McConnell (R-KY) said its “best not to single out judges,” and Sen. Ben Sasse (R-NE), on ABC’s “This Week,” said: “We have people from three different branches of government who take an oath to uphold and defend the Constitution.”

The Senate Judiciary Committee’s top Democrat, Sen. Dianne Feinstein (D-CA) said Trump “is not a dictator,” and that the Founding Fathers “wanted a strong Congress for the very reason that most of these kinds of things should be done within the scope of lawmaking. This is done within the scope of executive power.” In the coming days, weeks and, most likely, months, federal courts, including the Supreme Court, will test the checks-and-balances system the founders established centuries ago.