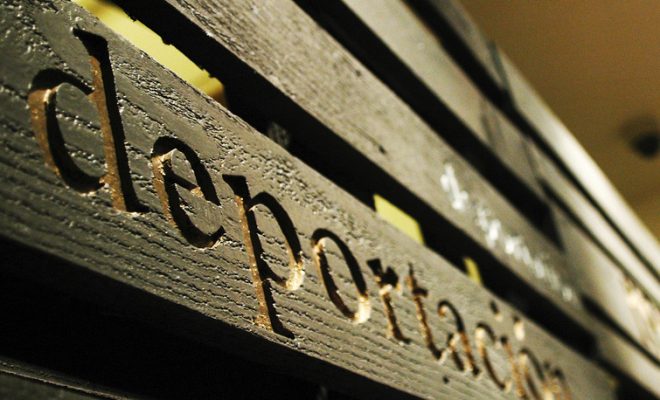 The influx of asylum-seeking refugees–many from Central America–that began in 2014 compounded the problem by further increasing caseloads and diversifying the type of cases put before judges. While President Donald Trump has ordered new facilities and an expanded border patrol workforce, his policies will likely confuse an already-tangled system.

In the past, immigration agents “voluntarily returned” the vast majority of undocumented people they apprehended. Under this practice, undocumented immigrants, particularly those apprehended along the border, were deported from the U.S. but were not formally processed or subjected to legal consequences. According to the Migration Policy Institute, the Clinton Administration deported a total of 12.3 million people (including “voluntarily returned” immigrants), but only formally deported about 900,000 people.

Critics demanding the government formally deport anyone found entering the U.S. without documentation referred to voluntary returns as “catch and release.” Soon there was a concerted government effort to implement policies that would essentially criminalize undocumented immigrants. These policies were meant to deter deported migrants from attempting to re-enter the country.

In 2005, U.S. Customs and Border Protection (CBP) announced the Consequence Delivery System (CDS), which resulted in an increase in formal deportations. According to the Migration Policy Institute, the Bush Administration deported 10.3 million people (two million fewer than Clinton), and formally deported over 2 million people. This trend continued under Obama, who was either unwilling or unable to rollback formal deportations.

The decades-long commitment to criminalizing undocumented immigration has put enormous pressure on immigration courts. For years, immigration courts have lacked the resources necessary to undertake the hundreds of thousands of deportation hearings. While existing policy demands the criminalization of undocumented immigrants, the courts are struggling to keep pace in spite of controversial methods, such as Operation Streamline, designed to expedite hearing proceedings.

In the summer of 2014, thousands of Central American refugees fled north in search of protection from violence in their home countries. In years prior, the vast majority of migrants attempting to cross the U.S.-Mexico border were Mexican citizens. Since the 2008 recession however, the number of Mexican migrants has dropped dramatically. In 2014, non-Mexicans outnumbered Mexican migrants for the first time on record.

Immigration officers found that far fewer people were attempting to cross the border undetected; instead, many more people were simply turning themselves in and requesting asylum. While approximately 90 percent of non-Mexican migrants crossing the southern border over the past few years have been from Central America, there is an increasing trend of non-Latin American migrants moving through Mexico in need of asylum.

Unwilling to provide asylum to the thousands seeking help and hoping to ease the strain placed on immigration infrastructure, the Obama Administration pressed the Mexican government to act. On July 7, 2014, Mexican President Enrique Peña Nieto announced the Southern Border Plan, which he claimed would both protect the rights of migrants while ensuring security of the region.

Mexico deported nearly twice as many Central Americans in 2015 than in 2014, but the plan did little to discourage refugees from traveling through Mexico. While the number of migrants traveling on traditional thoroughfares north through Mexico decreased, they took lesser-known, more dangerous, routes to avoid detection. Central American refugees and refugees from around the world continue to arrive at the southern border demanding their cases be heard by U.S. authorities.

Under both international and domestic law, the U.S. is required to review the case of anyone who arrives on U.S. soil claiming to be a refugee and requesting asylum. While the Obama Administration approved a fraction of the asylum requests, policy dictated that migrants requesting asylum were entitled to have their case formally reviewed.

Trump’s recent executive order accused refugees of abusing the asylum program by forcing asylum proceedings to delay deportation. Trump’s order upended the asylum process by affording border officers the power to review asylum claims. Reports suggest immigration agents are either reviewing cases in brief or simply refusing to accept asylum claims and turning people around. Critics argue that these practices are in violation of domestic and international laws.

The Courts Under Trump

Trump inherits a system that is plagued by backlogs that have been building for over a decade. Nonetheless, Trump’s persistent rhetoric, his numerous executive orders, and a spate of recent U.S. Immigration and Customs Enforcement raids suggest deportation cases will climb under his presidency.

While Trump ordered the expansion of the immigration enforcement workforce and construction of new facilities, the funds would require congressional approval. Furthermore, new appropriations would likely fail to fill existing cracks caused by a decade of aggressive deportation policies. Recent shifts in migration patterns have exacerbated immigration courts’ caseloads.

While Trump’s promises of secure borders and increased deportations won him the support of many, it remains to be seen whether he will be able to fulfill his promises. Trump’s immigration policies present a logistical nightmare for an already overworked system and will likely face numerous legal challenges both domestically and internationally. In attempting to ramp up immigration enforcement to unprecedented levels, Trump may force it to a grinding halt.

Callum Cleary
Callum is an editorial intern at Law Street. He is from Portland OR by way of the United Kingdom. He is a senior at American University double majoring in International Studies and Philosophy with a focus on social justice in Latin America. Contact Callum at Staff@LawStreetMedia.com.
Share:
Related ItemsCBPDeportationICEIllegal ImmigrationImmigrationMexicoRefugeesTrump