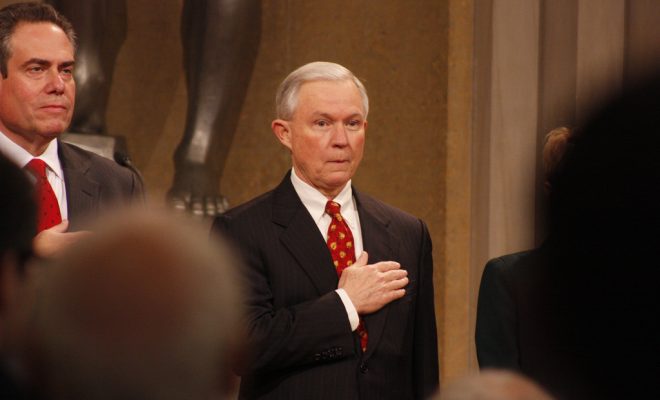 Senator Jeff Sessions (R-AL) faced the Senate Judiciary Committee on Tuesday and Wednesday for a confirmation hearing, kicking off a week of hearings for President-elect Donald Trump’s cabinet nominees. In the hearing, Sessions, Trump’s selection for attorney general, denied allegations of racism, and highlighted a career spent defending civil rights and combating crime. Protesters, some of whom were dressed in the white-hooded garb of the Ku Klux Klan, repeatedly interrupted the hearing.

The hearing opened with prepared remarks from Sessions, 70, who highlighted his 14-year record arguing criminal cases as an attorney. He also lamented the recent rise in violent crime in America, and marked it as an issue he would tackle as attorney general. “Protecting the people of this country from crime, and especially from violent crime, is the high calling of the men and women of the Department of Justice,” he said. “Today, I am afraid, that has become more important than ever.”

During the hearing, Sessions was adamant about the role of the Justice Department in upholding the nation’s laws, even when they diverged with his, or Trump’s, personal ideology. For example, as a senator, Sessions opposed same-sex marriage, but on Tuesday he said he would acknowledge the 5-4 Supreme Court ruling that essentially legalized gay marriage. He also firmly opposed the idea of a Muslim immigration ban, but did say, as Trump has, that immigrants from countries with a history of terrorism could be barred from entering the country.

In recent weeks, marijuana activists have vocally opposed Trump’s nomination of Sessions, who once said, “good people don’t smoke marijuana.” On Tuesday afternoon, Senator Patrick Leahy (D-VT) asked Sessions if he would enforce the federal marijuana ban at the state level. “I won’t commit to never enforcing federal law but, absolutely, it’s a problem of resources for the federal government,” Sessions replied. He didn’t offer many specifics on how he’d address the issue, aside from saying he would use “good judgment.”

Sessions, an early, ardent supporter of Trump, also sought to correct the “caricature” of him as a Southern racist. “You have a Southern name; you come from South Alabama, that sounds worse to some people,” he said. Since he was nominated as the nation’s top prosecutor in November, Sessions has come under fire for comments he has made over the years. As a federal attorney in the 1980s, Sessions said the KKK “were OK until I found out they smoked pot.” He also reportedly referred to Thomas Figures, an assistant federal attorney at the time, and a black man, as “boy.”

But Sessions denied harboring any sympathy for the Klan. “I abhor the Klan and what it represents and its hateful ideology,” he said in his opening remarks. He added: “I deeply understand the history of civil rights and the horrendous impact that relentless and systemic discrimination and the denial of voting rights has had on our African-American brothers and sisters. I have witnessed it.”

On Hillary Clinton, who he vociferously denounced during the campaign, Sessions said he would not personally oversee any further investigations into her email server or foundation. Instead, he said, he would appoint a special prosecutor if the department decided to pursue her further. “We can never have a political dispute turn into a criminal dispute,” he said. “This country does not punish its political enemies but this country ensures that no one is above the law.”

And in an unprecedented move, Senator Cory Booker (D-NJ), along with Representative John Lewis (D-GA) and Representative Cedric Richmond (D-LA), testified against Sessions. “I do not take lightly the decision to testify against a Senate colleague,” said Booker, who some suspect will run for president in 2020. “But the immense powers of the Attorney General combined with the deeply troubling views of this nominee is a call to conscience.”

Among other views, Booker opposes  Sessions as the next attorney general for his “failure to defend the civil rights of women, minorities and LGBT Americans to his opposition to common sense, bipartisan immigration reform.” In February 2016, Booker said he was “blessed and honored” to partner with Sessions during a ceremony commemorating the 1965 Selma march.