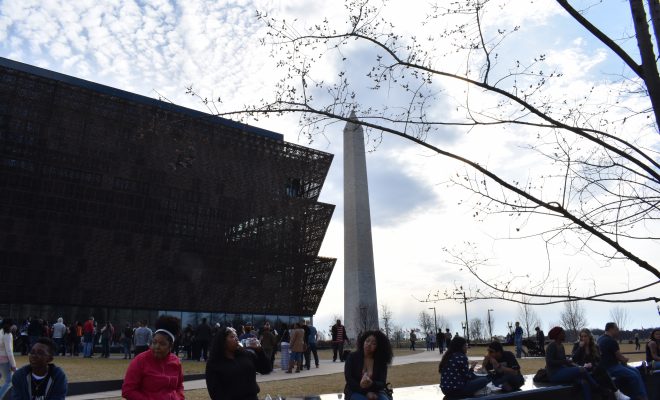 President Donald Trump made his first visit to the National Museum of African American History and Culture in Washington, D.C. on Tuesday. After a morning tour of the museum, which opened last September, Trump spoke about the need to “fight bigotry and hatred and intolerance.” He decried the divisions that exist in America and, after weeks of prodding from lawmakers and Jewish leaders, denounced the spate of bomb threats against Jewish Community Centers across the country since the election.

After his tour, which he said was “a meaningful reminder of why we have to fight bigotry and hatred and intolerance,” Trump gave a brief speech. “Today and every day of my presidency I pledge to do everything I can to continue that promise of freedom for African-Americans and for every American,” he said, flanked by his Secretary of Housing and Urban Development nominee Ben Carson–whose life is captured in an exhibit at the museum–and Carson’s wife.

“We’re going to bring this country together. We have a divided country that’s been divided for many, many years, but we’re going to bring it together,” Trump added. Trump’s daughter, Ivanka, and his aide (and former “Apprentice” contestant) Omarosa Manigault also accompanied Trump to the museum. Rep. Tim Scott (R-South Carolina) was also there. Trump, it seemed, sought to add legitimacy to his remarks by surrounding himself with black aides and lawmakers.

But what Trump has said, and did not say, during the campaign and his presidency regarding the black community has drawn criticism. At speeches and rallies, in stadiums packed primarily with white supporters, Trump was fond of painting inner cities as dens of violence and decay that only afflict black people. Most recently, at a lengthy press conference last week, Trump asked April Ryan, a White House reporter who is black, if she is “friends” with the Congressional Black Caucus. After Ryan asked if Trump would meet with the CBC, he replied: “Do you want to set up the meeting?”

During Trump’s visit to the museum, a line of dump trucks was deployed on Constitution Avenue, as an extra layer of security:

Law enforcement agencies have employed similar tactics in the past, both for Trump and previous presidents. On Election Day, for instance, the New York Police Department placed 10 Sanitation Department trucks in front of Trump Tower in Manhattan, where Trump was staying. This barrier is a response to the increased threat of truck attacks, which have been used by Islamic State sympathizers in Nice, France, and Berlin.

In 1970, in response to anti-Vietnam War protests, President Richard Nixon’s staff deployed a similar security tactic. Nixon’s advisers decided to surround the White House with school buses. “To me, it’s different looking at a bus than it is looking at a cordon of SWAT-clad policemen, which to me invites a confrontation,” said Egil Krogh, a Nixon adviser who helped devise the bus buffer. “You have to provide the protection, but you do it in a way that is the least provocative, and likely to [provoke] an attack.”

In his remarks, Trump responded to the rise in reported anti-Semitic incidents since the election–just last week, 100 headstones were vandalized at a Jewish cemetery in St. Louis. Leaders of Jewish groups and many lawmakers have been calling for Trump to forcefully respond in recent weeks. On Tuesday, he called the incidents “horrible and painful and a very sad reminder of the work that must still be done to root out hate and prejudice.”