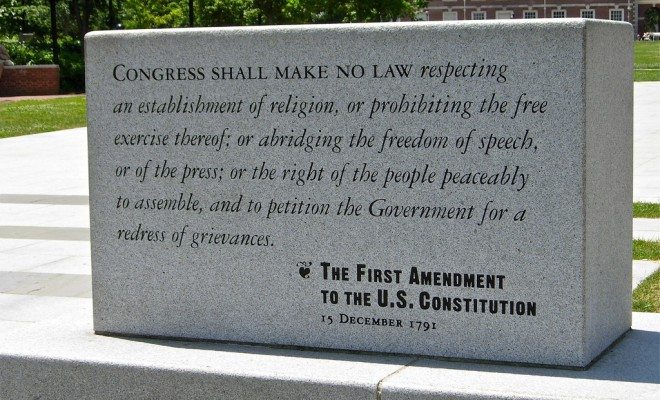 Ever since the Supreme Court legalized gay marriage last summer, contentious debates over how states can protect the religious freedoms of businesses and organizations have been underway. States like Indiana, Missouri, and West Virginia have been proposing religious liberty laws that have led to strong reactions on all sides of the aisle.

On Wednesday morning, after an impressive 39-hour filibuster, Republicans in the Missouri Senate voted to end the discussion on a bill that could allow religiously affiliated organizations to refuse to participate in activities that could be considered condoning or participating in same-sex marriage. The bill, Senate Joint Resolution 39, proposes an amendment to Article I of Missouri’s state constitution that would prohibit penalizing organizations for refusing services if they go against the organization’s religious beliefs.

Democratic Senators in Missouri used their filibuster to stall the bill from going to a vote while harping on topics “including other bills, Donald Trump, slick roads, soft drink ads in foreign countries, and ‘Jesus sightings’ in foreign objects,” an NPR affiliate reported. After Republican senators voted to end the filibuster, they subsequently voted in favor of placing the resolution on the ballot this November in a vote of 23-9. The bill still has to go to the house before the resolution can be placed on the upcoming ballot, at which point Missouri voters would decide on the amendment themselves.

Bills like SJR 39 have been popping up left and right across the country as local governments try to protect  people’s First Amendment right to religious freedom. But these bills have sparked a lot of controversies. Why? Many people claim that they are laws focused on discriminating against gay people, instead of protecting religious liberty as they claim.

Around a year ago, Indiana passed a law similar to the Missouri resolution that allows businesses to cite their adherence to religious beliefs as a defense in civil suits–allowing them to refuse service to particular people or groups if doing so violates their religious beliefs. One of the biggest concerns about Indiana’s law, in particular, is its vague wording and the ambiguous nature of its purpose. While Indiana Governor Mike Pence claimed that the bill was in no way about discrimination, it is really difficult to differentiate between the intention behind the bill and its impact until you can see how it plays out in practice.

Celebrities have been jumping to defend gay marriage in comedic videos poking fun of religious freedom laws and tweets supporting the movement to prevent sexuality-based discrimination.

If you really and truly want pizza for your gay wedding in Indiana… We will make it for you. @donald_faison pic.twitter.com/y91qIkVoyt

And, of course, what would a discussion of policy be without acknowledging its impact on the current presidential race. Candidates are using these religious freedom laws as talking points to entice voters, especially those on the right of our political spectrum. After Indiana’s law passed but similar bills were shut down in other states, Ted Cruz said:

On my first day of office, I will instruct the Department of Justice and the IRS and every federal agency that the persecution of religious liberty ends today

Yes, it’s tempting to want to stand up for religious freedom in our country, especially when that freedom is guaranteed by the Constitution, but when the fiercest and most frequent claims of persecution come from middle-aged, white catholic men, it kind of confuses the issue.

Is baking a pizza for a gay wedding really the crux of an American war on religion? Probably not. Should we be watching out for religious minorities to protect their ability to coexist in our complex religious landscape? Definitely. Is enacting bills to protect a cake baker from cake baking for gay couples really the hard hitting way to protect the minority religions that are actually being persecuted? Almost definitively not.

Let’s follow in the footsteps of West Virginia, who voted down a religious liberties bill after backlash claiming that it was discriminatory. And Georgia, who dismissed a bill when their Republican governor acknowledged it to be unnecessary for protecting religious freedom. It’s time to to support government action that–while standing up for freedom of religion and beliefs–ultimately upholds protection from discrimination for all of our citizens.

Alexandra Simone
Alex Simone is an Editorial Senior Fellow at Law Street and a student at The George Washington University, studying Political Science. She is passionate about law and government, but also enjoys the finer things in life like watching crime dramas and enjoying a nice DC brunch. Contact Alex at ASimone@LawStreetmedia.com
Share:
Related ItemsConstitutional AmendmentFilibusterMissouriReligious LibertySame Sex MarriageState Politics