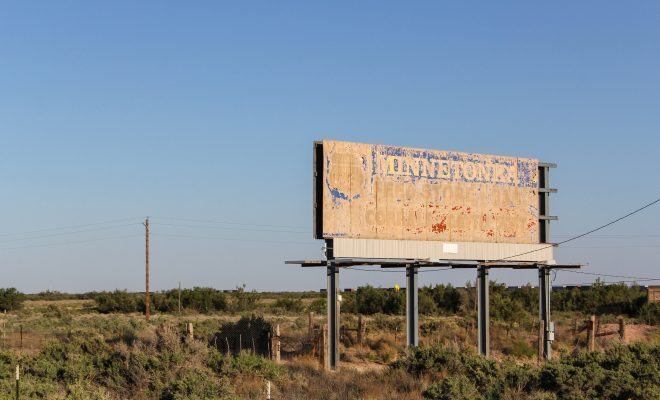 "Minnetonka Feed Store and Bar" courtesy of [el-toro via Flickr]

People who saw Rick Tyler’s billboard alongside Highway 411 in Polk County, Tennessee either couldn’t believe their eyes, or must have thought they were seeing a practical joke–its message read “Make America White Again.” But the message from the independent candidate running for Congress was not a joke, and he wants to make sure everyone knows.

The sign is an obvious reference to Donald Trump’s saying “Make America Great Again.” Tyler claims he’s not racist, but merely looking back to a time when America was safe enough for residents to leave their doors unlocked. However, his Facebook post tells another story:

It was an America where doors were left unlocked, violent crime was a mere fraction of today’s rate of occurrence, there were no car jackings, home invasions, Islamic Mosques or radical Jihadist sleeper cells.

A congressional candidate is actually trying to argue that this sign isn’t racist… https://t.co/ODEG6A1idX pic.twitter.com/xjvFVL2RZs

Tyler’s campaign also erected another billboard depicting an illustration of the White House surrounded by Confederate flags. At the top of that billboard are Martin Luther King Jr.’s famous words “I Have a Dream.” Tyler claimed that the signs were a very well planned maneuver to get around “the iron curtain of censorship.” In regards to people’s strong reactions to the message, he wrote, “Obviously, there are the ‘frothing at the mouth lunatics’ who react in a completely irrational, emotional, Pavlovian dog fashion.”

He even goes on to claim that people who are not white should not be allowed to move into the US claiming,

A moratorium on nonwhite immigration and the abolition of policies that subsidize nonwhite birth rates would be two constructive actions toward beginning the long journey back toward sanity and stability in our beleaguered and foundering nation.

Tyler’s words evoke chilling references to white supremacists and neo-Nazis. Topher Kersting, who is also running for Congress as an independent, told the Huffington Post,

He’s about as racist as you can get, from what I can tell […] He wants to go back to the 1950s where whites are in control and blacks ‘know their place. He’s wide open about it. It’s kind of scary we’re not past this.

The signs have since been removed, but no one knows who took them down. Tyler is of the opinion that most people in the country liked them, since he saw some people snapping photos of one earlier. He wants them back up as soon as possible since he paid for them to be there until the general election in November.

Emma Von Zeipel
Emma Von Zeipel is a staff writer at Law Street Media. She is originally from one of the islands of Stockholm, Sweden. After working for Democratic Voice of Burma in Thailand, she ended up in New York City. She has a BA in journalism from Stockholm University and is passionate about human rights, good books, horses, and European chocolate. Contact Emma at EVonZeipel@LawStreetMedia.com.
Share:
Related ItemsCampaign AdsCongressControversial SayingsMake America White AgainPoliticsRacismRick TylerTennessee