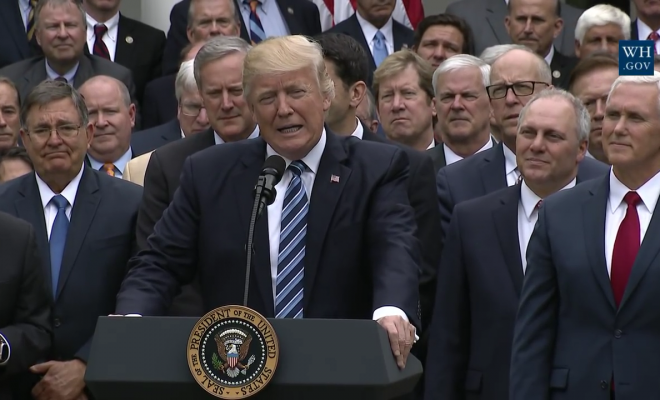 Senate Republicans released their version of a bill to overhaul the health care system on Thursday. In general, the Senate version looks a lot like the version passed by the House in May with some important tweaks–notably, it includes steeper cuts to the Medicaid program in the long-term and changes the tax credit system to be a less generous version of the one currently in place. While it’s easy to get stuck in the details of these tweaks, arguably the best way to evaluate the bill is to look at its effects on taxing and spending. It may be most prudent to ask one question: should we offset tax cuts for the rich and businesses by cutting spending on the poor and working class?

The tax cuts in the American Health Care Act, or AHCA, amount to about $660 billion over 10 years and would be paid for, and then some, largely by slashing more than $800 billion in spending on Medicaid–the insurance program that provides health care to America’s most vulnerable, including children, the elderly, people with disabilities, pregnant women, and the poor. Although it would direct several billions of dollars to funds that help stabilize the individual insurance markets, that funding will end in 2026 while the changes the Medicaid will be permanent.

To understand current Republican proposals, it’s worth taking a minute to look at the law they seek to “repeal and replace.” The Affordable Care Act, or Obamacare, included a number of new taxes designed to help pay for new tax credits and a large expansion of the Medicaid program. The tax credits subsidized the cost of premiums for working class people who can’t get health insurance from their employer and the Medicaid expansion gave states funding to cover people living near the poverty line.

While the Affordable Care Act sought to raise taxes in order to increase insurance coverage, the American Health Care Act seeks to cut taxes, leading to a large reduction in the number of people with health insurance. According to the Congressional Budget Office, a non-partisan agency tasked with analyzing the effects of new legislation, the bill that passed the House would have increased the number of people without health insurance by 23 million by 2026. Although we will not have the updated projections for the Senate version until next week, that number is not expected to change very much.

The Senate version of the AHCA would undo the Medicaid expansion, phasing out the additional federal funding, and would reduce the value of the tax credits for most Americans who are currently eligible for them. In addition to ending the Medicaid expansion, the Republican bill would fundamentally restructure the Medicaid program by instituting a cap on the amount of funding per person enrolled. This new system would shift the burden of cost increases from the federal government–which currently covers a fixed percentage of all costs–to states and would amount to a significant reduction in the projected spending on the program in the long term. Medicaid is the country’s largest health insurance program, covering 20 percent of all Americans, including 30 percent of adults with disabilities, 60 percent of children with disabilities, 49 percent of births, 64 percent of all nursing home residents, and 76 percent of poor children.

For a more in-depth look at what the bill that passed the House would do to Medicaid, check out this article.

So who would benefit from the bill’s tax cuts? The AHCA would get rid of about 14 different taxes that target a broad range of groups, from high earners to indoor tanning companies. It would also slash some of the taxes put in place by the Affordable Care Act to target industries that stood to benefit from the coverage expansion, like medical device manufacturers and prescription drug makers. One of the most notable taxes was the one on investment income for individuals earning more than $200,000 per year and couples earning $250,000 and up per year. All of these taxes would be repealed, leading to a significant windfall for the wealthiest Americans. The Tax Policy Center estimated the net effects of the House bill and found that people with incomes greater than $200,000 would see their tax burden decrease by $5,640 on average, while the spending cuts would mean that the lowest income Americans would be hurt the most.

It’s also worth noting that the bill would repeal what’s known as the individual and employer mandates. The individual mandate requires people to maintain health insurance or pay a penalty at tax time. The employer mandate imposes a similar penalty on companies with a minimum number of full-time workers but do not offer health insurance to employees. Republicans have strongly criticized these penalties, which have been one of the driving forces behind the effort to scrap the Affordable Care Act.

There are a number of important differences between the House version and the Senate version of the Republican health care bill, which we will undoubtedly hear about during the coming debate. It also seems likely that changes will be made in the short period before Senate Majority Leader Mitch McConnell rushes the bill to the Senate floor for a vote. While it’s important to understand how these changes will affect people, taking a broader look at a very complicated bill might be the easiest way to make an assessment of it. If you think that taxes on businesses and the wealthy are too high and you don’t mind seeing an increase in the number of people without health insurance, then you’ll most likely support this bill. But if not, you may want to call your senator.