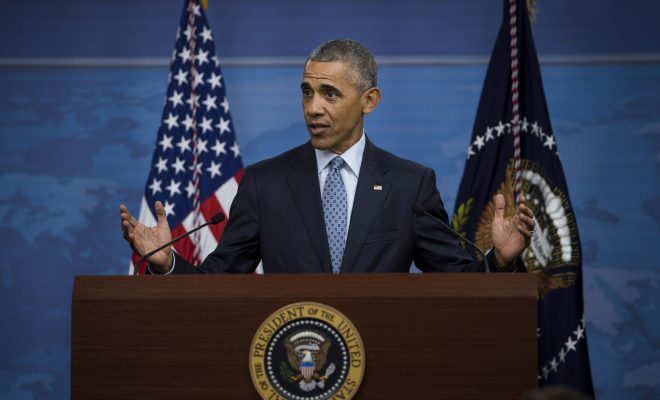 Obama: Islamic State Will Be Defeated, But Independent Attacks Still a Threat

The Islamic State is ”inevitably going to be defeated,” said President Obama at a press conference on Thursday. The President met with reporters after a briefing at the Pentagon from his national security team on the fight against ISIS.

He said that even though ISIS will certainly be defeated, the networks from the terrorist group will probably keep trying to commit acts of terrorism:

As we’ve seen, it is still very difficult to detect and prevent lone actors or small cells of terrorists who are determined to kill the innocent and are willing to die. And that’s why… we’re going to keep going after ISIL aggressively across every front of this campaign.

Although the press was supposed to focus on the war against terrorism, a lot of the questions ended up being about the Trump situation. But after a few, the President had had enough.

Today @POTUS convened his @NSC44 at the Pentagon for a regular meeting on efforts to degrade & destroy ISIL.https://t.co/XhNlSMdNfj

Also on Thursday, the Egyptian army confirmed that it killed an important ISIS-allied leader, Abu Duaa al-Ansari. In total 45 terrorists were killed and weapon and ammunition supplies destroyed in the airstrikes by the army in the Sinai Peninsula.

Al-Ansari was the head of the group Ansar Bait al-Maqdis, which prospered in the chaos after the Government of Egyptian President Mubarak was overthrown in 2011. The group entered an alliance with ISIS in 2014 and was responsible for bombing a gas pipeline between Egypt, Israel, and Jordan, as well as the crash of Russian flight 9268 in 2015.

Russia got a reprimand from Obama for its continued support of the Syrian government and attacks on opposing forces. But the U.S. will continue to attempt to cooperate with the nation to jointly bring down ISIS.

However, as Obama pointed out at the press conference, independents inspired by the Islamic State may very well keep attacking people in public spaces such as subways or parades to spread fear, which is why the U.S. must keep up the work of fighting against the terrorist group.

Emma Von Zeipel
Emma Von Zeipel is a staff writer at Law Street Media. She is originally from one of the islands of Stockholm, Sweden. After working for Democratic Voice of Burma in Thailand, she ended up in New York City. She has a BA in journalism from Stockholm University and is passionate about human rights, good books, horses, and European chocolate. Contact Emma at EVonZeipel@LawStreetMedia.com.
Share:
Related ItemsISILISISIslamic StateObamaPentagonPoliticsPresident ObamaPress ConferenceSpeechTerrorismTrumpWar on Terror