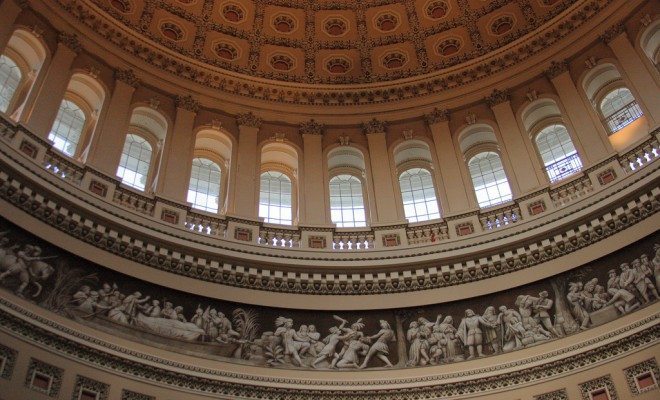 Image courtesy of [How I See Life via Flickr]

Do We Need a Political Revolution?

This is the first article in a two-part series about Lee Drutman’s plan for political reform. Click here to read the introduction. The second part gives a more in-depth look at his policy proposals and their potential consequences.

In a recent paper, Lee Drutman, a Senior Fellow at the New America Foundation’s Political Reform program and professor at John Hopkins University, proposes a bold new plan to end government dysfunction. While he sees several structural issues with the American political system, he remains skeptical of the populist calls for reform, which are generally criticized as being utopian and unrealistic. Drutman’s ideas for reform are certainly interesting and worthy of discussion, but the context in which he talks about reform is equally as important.

Most, including Drutman, believe that significant structural reforms are needed to help get the government working again, but it’s worth questioning whether a populist upheaval is necessary. More to the point: do we need a political revolution?

Before laying out his proposals, Drutman first identifies the inherent challenge involved with reforming the American style of democracy–balancing a government of the people, by the people, and for the people with the need for expert policymakers. He notes that both of these principles, which he calls majority rule and technocracy, have their drawbacks and benefits. It is clearly important to have citizens involved in the government, but at the same time is is important to be realistic about their ability to act as informed voters. Most people don’t have the time to become an expert on every topic, which is why we have a representative democracy in the first place. But experts themselves can get too caught up in policies while losing touch with the needs of the American people. A balance would bring people into the political system to help them choose and empower the proper experts and policy entrepreneurs.

Most liberal visions of reform involve restraining the influence of lobbyists, interest groups, and money in order to end what many see as corruption and return politics to the people. On the conservative side is the desire to reduce the scope of government so that corrupt politicians can’t serve themselves. But Drutman sees both these visions as utopian and unrealistic.

Trying to remove interest groups and big business from the equation has proven to be nearly impossible, and doing so may even impede those who wish to lobby in the public interest. Getting rid of career politicians and stripping Congress of its resources only leads to inefficiency and cutting out “career politicians” makes it harder to create good policy.

Rather than seeking to limit the influence of outside interests or cut government resources, Drutman argues that reforms should try to empower from within. Instead of limiting the amount of dealmaking, maybe we should make more deals, but with everyone sitting at the table. As Drutman puts it, “The answer, in short, is more politics.”

Drutman argues that his plan is the most realistic approach to fix politics, but the existence of polarization and inequality–the very same issues he seeks to resolve–makes his plan all the more challenging to accomplish. But that remains the case with any sort of reform, or in Congress’s current case, passing legislation to begin with.

After discussing the paper on Tuesday, Drutman revealed why he remains hopeful that Congress might consider a change. “You see this over and over again, when members of Congress retire the thing that they complain about is, ‘I spent all of my time raising money and it was no fun’,” he said. New programs like donor matching could actually make Congressmen enjoy their jobs more and feel better about their work. While it remains a tall order, doing so could be in the self-interest of politicians.

Click here to read the second part of the series that focuses on Drutman’s solutions.