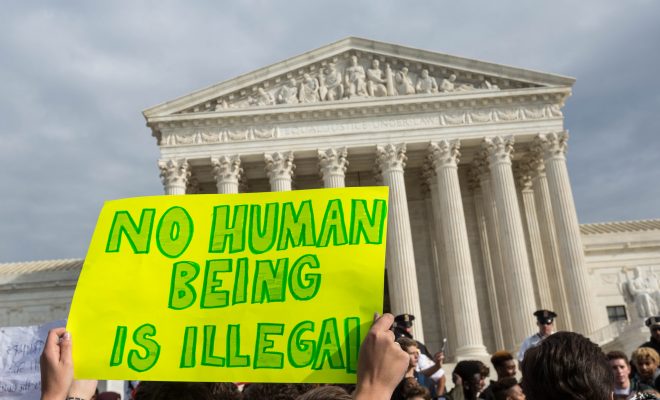 Here’s What You Need to Know About VOICE

President Donald Trump is getting some praise for his joint address to Congress–specifically his tone and the fact that he didn’t say anything too racist while he was addressing the nation. However, there was one moment during his speech that elicited a groan from his audience. This is not a groan in the abstract sense, but a literal groan. It was when Trump introduced the Victims of Immigration Crime Engagement office (VOICE).

As Trump outlines in his speech, VOICE is supposed to provide a voice (oh, I get it now!) for those who have been affected by crimes committed by illegal immigrants. However, the language Trump used in his speech was vague to say the least.

So what actually is VOICE? Here’s a quick breakdown of where this office came from, what it is, and whether it really is groan-worthy.

Trump has signed a lot of executive orders since he got into office. The one that VOICE is related to was signed on January 25 and called “Enhancing Public Safety in the Interior of the United States.” It concerns issues related to illegal immigration and the expansion of the role of the Department of Homeland Security (DHS). DHS oversees the Immigrations and Customs Enforcement Agency (ICE).

Aside from threatening to restrict federal funds from jurisdictions that don’t turn over detained illegal immigrants and authorizing the DHS secretary to allow state and local officials to effectively act as immigration officers, the EO calls for two actions that are instrumental to VOICE:

On February 20, two DHS memos from Secretary John Kelly that were circulating for a while were reported by McClatchy. These memos outlined how the DHS planned to follow through on the executive order’s provisions. One of these memos establishes VOICE, which serves as a “programmatic liaison between ICE and the known victims of crimes committed by removable aliens.” The office plans to provide victims, “to the extent permitted by law,” information about crimes committed by illegal immigrants and victims’ families with information about the suspect, such as their immigration status and custody status.

The memo also directs the Director of ICE to reallocate resources used to “advocate on behalf of illegal aliens” to VOICE instead, and “to immediately terminate the provision of such outreach or advocacy services to illegal aliens.”

It also directs ICE to develop the weekly report that Trump called for in the EO. The memo highlights that the ICE Director will develop a weekly report on a medium that can be accessed by the public.

So what does VOICE do exactly?

What VOICE does is give victims a voice by not giving illegal immigrants the benefits of the Privacy Act which, with the help of Trump’s executive order, is now a lawful practice for government agencies. VOICE would allow victims to have access to their offenders’ information that had been previously withheld by agencies. The potential cost to immigrants here is that, according to the New York Times, those who are seeking legal status could face a harder citizenship process. According to the Chicago Tribune this could also be used to target immigrants for deportation. And since VOICE is so closely tied to privacy protections for illegal immigrants, what happens to all that information when an illegal immigrant goes through the process to become a citizen? What will the DHS do with that information?

The DHS memo seems to attempt to shed light on this issue, but with very vague language. In the memo, Kelly outlines how the DHS Privacy Office and the Office of the General Counsel will work together to “develop new guidance specifying the appropriate treatment of personal information DHS maintains in its record systems.” We still do not know exactly what that “new guidance” is, which is alarming considering Trump’s joint address has now brought the existence of VOICE to the forefront.

VOICE does a lot to tackle a small national issue

The issue with VOICE lies in its specific acknowledgment of crimes committed by illegal immigrants, and framing the issue as if it is a dire national crisis. A study published by the American Immigration Council shows that not only are immigrants less likely than native-born citizens to engage in criminal behavior, but higher immigration is associated with lower crime rates.

VOICE is a practice of proxy racism–it seeks to cover a racist notion of a whole people with a cynical dose of fear for terrifying uncertainties. The office would elevate the worst stories that immigrants have to offer and have them serve as referenda for these human beings as a whole. VOICE shouts over the cries of the vital and vibrant immigrant communities that so desperately want and need to be heard in this country.

Austin Elias-De Jesus
Austin is an editorial intern at Law Street Media. He is a junior at The George Washington University majoring in Political Communication. You can usually find him reading somewhere. If you can’t find him reading, he’s probably taking a walk. Contact Austin at Staff@Lawstreetmedia.com.
Share:
Related ItemsCongressIllegal ImmigrationImmigrationjoint addressPoliticsTrumpVOICE