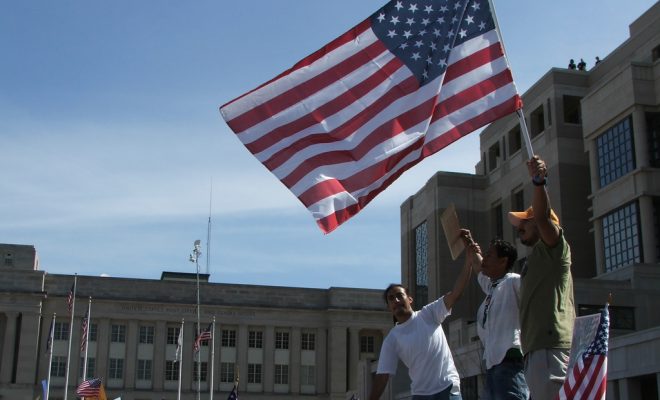 Imagine taking this test: can you speak English? Can you code? Do you have a college degree? Do you have money saved away? For each “yes,” you get 10 points. If you score enough points, congratulations, you can become a legal resident of America. If not? Sorry, your merits are not up to snuff, and you must return to your home country. This is a crude example of what a “merit-based” immigration system, the kind President Donald Trump mentioned in his Tuesday speech to Congress, would look like.

The idea is hardly new–Congress almost reached a deal to implement such a system in 2007–but with Trump’s comments, it has been brought back to fore of the immigration conversation. Currently, most legal migrants come to the U.S. with immediate family members already living, legally, in the country to sponsor them. This so-called “family-based” system has been in place since the 1960s. Trump, in his remarks on Tuesday, suggested this system is an economic hindrance.

In championing a more “merit-based” system, Trump said “those seeking to enter a country ought to be able to support themselves financially, yet in America, we do not enforce this rule, straining the very public resources that our poorest citizens rely upon.” He said a “merit-based” model would “save countless dollars, raise workers’ wages and help struggling families, including immigrant families, enter the middle class.”

Traditionally politicians are split: some, mostly Democrats, see a shift to a more “merit-based” system as exclusionary and potentially discriminatory against poor people and people of color. Many Republicans support such a system, and say that wages for low-skilled jobs–like kitchen or agricultural work–that are often filled by migrants would increase. Instead of immigrants without high school diplomas filling those jobs, it would be Americans without high school diplomas.

Could Trump Change the System?

Lawmakers, for years, have agreed that the immigration system needs a make-over. But Trump’s tone on immigration, both legal and illegal, has been toxic and incendiary: he has called Mexicans “rapists” and “murderers.” He tried, and failed after a federal court stymied the effort, to enforce a temporary ban on visitors from seven largely Muslim countries. He has ordered a wall to be built on the Mexican border. And his chief strategist, Steve Bannon, sees the West as being “at war” with Islam.

And then there are Trump’s actions on illegal immigration. His administration recently issued an executive order to “take the shackles off” federal agents in deporting people in the U.S. illegally. While President Barack Obama deported record numbers of undocumented immigrants, he focused on high-level criminals, whereas Trump’s order broadens the scope to any lawbreaker–which could apply to all immigrants in the country illegally.

Has “Merit-Based” Been Tried Before?

In 2014, according to data from the Migration Policy Institute, 64 percent of legal immigrants living in the U.S. had been allowed in based on a family member’s sponsorship. Fifteen percent received employment-based preference, and 13 percent were refugees. So in Trump’s view, the weight of legally admitted immigrants to the U.S. would shift from “family-based” to “merit-based.” Such a shift has been attempted before.

President George W. Bush tried to reach a deal with Congress in 2007 to reform the immigration system to prioritize merits over family ties. In exchange for a system overhaul, to placate Democrats, his administration offered to create a legal path to citizenship for the roughly 11 million undocumented immigrants in the U.S. at the time. The legislation was defeated in the Senate. Republicans have intermittently introduced similar bills in subsequent years but, perhaps until now, have not had sufficient political capital to make real progress.

In the U.S., where about one million immigrants are granted legal status each year, the economic benefits of a “merit-based” system are unclear. But in Australia, a country that Trump pointed to, along with Canada, as having a “merit-based” system, immigration has a “profound positive impact not just on population growth, but also on labour participation and employment, on wages and incomes, on our national skills base and on net productivity,” according to a recent Migration Council Australia report.

But comparing the immigration models of the U.S. and Australia is comparing apples to oranges. The U.S. lets in about a million legal immigrants each year. Australia on the other hand let in around 262,000 in 2016. Over half of those were highly skilled; the rest are a hybrid of temporary workers, refugees, asylum-seekers, or people sponsored by family members already in the country legally.

As of today, Trump’s stance on legal immigration is foggy, as is the case with many of his views. Is Bannon or Stephen Miller, a highly influential voice in Trump’s policy proposals, running the show? Do Trump and his team really want more highly skilled immigrants in the U.S., to better its future and the future of other people, no matter their faith or cultural background? Or is it a shrouded attempt at limiting all immigration? These are questions that will take time to answer, but one thing is for sure: changing America’s immigration system is no easy feat, and will not happen overnight.