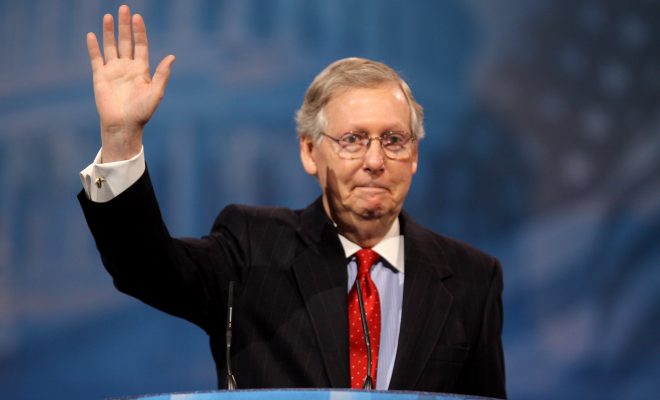 Mitch McConnell vs. Elizabeth Warren: What is Rule 19?

In a Senate debate about Wednesday’s confirmation vote for Attorney General Nominee Jeff Sessions, Warren began to read a letter written by Coretta Scott King in 1986. Warren quoted King, whose letter addressed Sessions’ record on civil rights as a U.S. attorney, saying that Sessions used “the awesome power of his office to chill the pre-exercise of the vote by black citizens.” King was writing to oppose Sessions’ nomination to a federal judgeship in Alabama, a position he was ultimately denied.

A US Senator isn’t allowed to read a letter by a civil rights icon but our President is allowed to attack one. #LetLizSpeak. #StopSessions pic.twitter.com/Up4H4NWDII

McConnell, the Senate majority leader, responded to Warren’s letter reading by citing Rule 19, saying: “The senator has impugned the motives and conduct of our colleague from Alabama, as warned by the chair.” Voting along party lines, the Senate agreed with McConnell 49 to 43. So, what exactly is Rule 19, and where does it come from?

It’s an old one: in February 1902, a quarrel broke out between two Democratic Senators from Alabama, Benjamin Tillman and John McLaurin. Tillman was angry that McLaurin seemed to be swayed by the Republicans on certain issues, namely on the question of annexing the Philippines. Tillman accused McLaurin of treachery and corruption, and what happened next is what led directly to the creation of Rule 19.

“The 54-year-old Tillman jumped from his place and physically attacked McLaurin, who was 41, with a series of stinging blows,” according to Senate history. “Efforts to separate the two combatants resulted in misdirected punches landing on other members.” A few months later, the Senate enacted Rule 19, with the goal of tidying up decorum on the Senate floor.

Now, had Warren continued, it’s unlikely she and McConnell would have had a physical altercation. But Rule 19’s language is not just about deterring physical conflict. The rule states: “No Senator in debate shall, directly or indirectly, by any form of words impute to another Senator or to other Senators any conduct or motive unworthy or unbecoming a Senator.” Basically, don’t undermine a fellow senator by questioning his or her ability to govern.

The last time the Senate even came close to using Rule 19 to silence a senator was in 1979, when a heated debate between Sen. Lowell Weicker (R-CT) and Sen. John Heinz (R-PA) became heated. Heinz reportedly showed Weicker Rule 19, the two shook hands, and the situation was resolved. Last year, McConnell might have had cause to invoke Rule 19 against a fellow Republican, Sen. Ted Cruz (R-TX). Cruz accused McConnell of lying “over and over and over again.”

According to McConnell, Warren has repeatedly brushed with breaking Rule 19. Reading a letter written by King, it seems, was the final straw. “Sen. Warren was giving a lengthy speech,” McConnell told reporters after the incident. “She had appeared to violate the rule. She was warned. She was given an explanation,” He added: “Nevertheless, she persisted.” Later Tuesday evening, Warren read the letter in full on Facebook. Two million people watched–and listened.