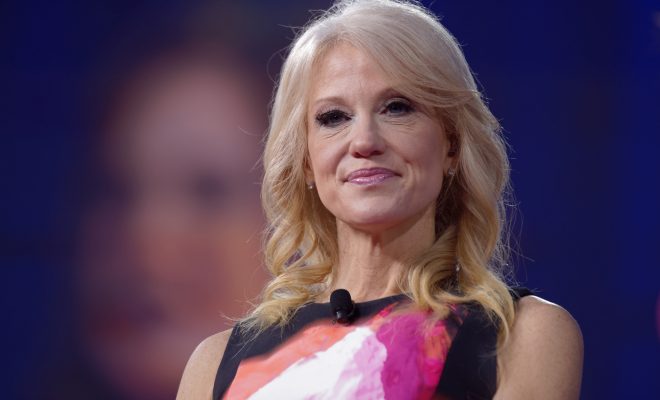 Here’s a breakdown of everything that happened to Kellyanne Conway in February:

In an interview with Chris Matthews, Conway uses a fabricated massacre to justify the immigration ban.

The day after the interview, Conway claims she misspoke.

However, the Washington Post finds this isn’t the case, as Conway had referred to the “Bowling Green massacre” three times before.

CNN reportedly declines the White House’s offer to have Conway appear on Jake Tapper’s “State of the Union,” due to “serious questions about [Conway’s] credibility,” according to the New York Times. Conway refutes this claim on Twitter, but is quickly called out by CNN’s PR account.

. @KellyannePolls was offered to SOTU on Sunday by the White House. We passed. Those are the facts.

.@CNNPR @KellyannePolls you are not the first.

Conway appears on Tapper’s other show, “The Lead.” The interview garners Tapper acclaim for his relentless grilling. At one point in the interview Conway seems to admit her boss is a liar. The interview also gives the internet Tapper’s resting bitch face:

the look on jake tapper’s face while talking to kellyanne conway… pic.twitter.com/NiQtNSh8Rt

This prompts two members of the House Oversight Committee to send a letter to the White House and the Office of Government Ethics asking for recommendations for disciplinary action against Conway. According to POLITICO, the OGE’s website crashes due to traffic that same day. Later that day, Sean Spicer in a press briefing says Conway was “counseled” for her comments. This causes some controversy within the White House.

In an MSNBC interview, Conway claims that National Security Adviser Michael Flynn enjoys the “full confidence of the president” despite reports that revealed Flynn lied to Vice President Mike Pence about his communications with Russia’s U.S. ambassador. Flynn resigns later that day.

After her Lauer interview, Conway tweets “I serve of the pleasure of @POTUS. His message is my message. His goals are my goals. Uninformed chatter doesn’t matter.”

A Twitter account named “Lib Hypocrisy” responds, praising Conway’s “strength and resiliency” and expressing love for her. Conway subsequently retweets the praise while responding that she loves them back. It is discovered that “Lib Hypocrisy’s” bio includes the hashtags #Nationalist and #WhiteIdentity.

The Office of Government Ethics (February 14)

The OGE responds to the House Oversight Committee’s letter by sending a letter of their own to the White House ethics official, recommending that the White House take disciplinary action against Conway.

The “Morning Joe” hosts officially ban Conway from their show because they believe she has lost her credibility.

CNN’s Dylan Byers reports that five sources believe the person who has been leaking stories about Trump’s frustration with Spicer is Conway. They say Conway is doing this place the blame of the administration’s troubles on Spicer and to earn a “lasting place in the President’s inner circle.”

You may have noticed there is a week-long gap between this controversy and the last one. Apparently, that was the White House’s intention as, according to CNN Money, the White House sidelined Conway because comments she made during appearances on multiple shows were “off message.”

When the news of the “sidelining” comes out, Conway refutes these claims and says she was invited to shows but wanted to focus on other pieces of her “portfolio.”

At the Conservative Political Action Conference, Conway says she doesn’t identify with being a feminist because “[modern-day feminism] seems to be very anti-male, and it certainly is very pro-abortion.” The Merriam-Webster Twitter account then tweets this in response:

📈’Feminism’ is defined as “the belief that men and women should have equal rights and opportunities.” https://t.co/Zjf7CAPUjL

The Washington Post reports that 15 law professors specializing in legal ethics filed a professional misconduct complaint against Conway, who is a member of the D.C. bar.

Austin Elias-De Jesus
Austin is an editorial intern at Law Street Media. He is a junior at The George Washington University majoring in Political Communication. You can usually find him reading somewhere. If you can’t find him reading, he’s probably taking a walk. Contact Austin at Staff@Lawstreetmedia.com.
Share:
Related ItemsBowling GreenCNNControversyJake TapperKellyanne ConwaySean SpicerTrumpWhite House