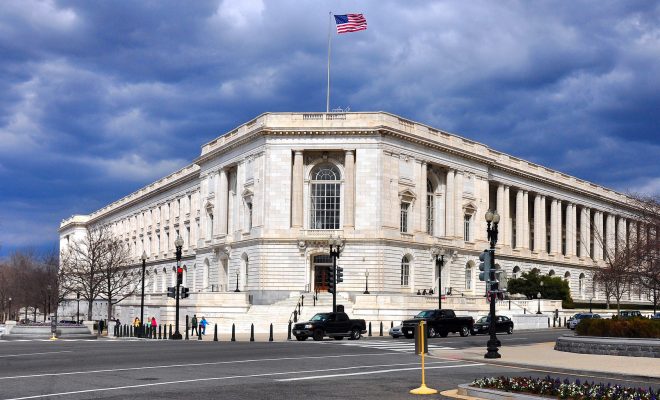 "US Senate Building" Courtesy of Larry Lamsa; License: (CC BY 2.0)

If the Health Care Bill Passes the House, Will it Pass the Senate?

Following their failed effort to pass health care legislation in March, House Republicans are set to vote on a bill Thursday that would repeal and replace large chunks of the Affordable Care Act. According to House Majority Leader, Rep. Kevin McCarthy (R-CA), the bill has secured enough votes to pass. “We have enough votes,” he said on Wednesday night. “It’ll pass.”

The renewed push for a Republican health care overhaul began in mid-April when Rep. Tom MacArthur (R-NJ) introduced an amendment aimed at attracting the more conservative congressmen who balked at the initial bill. The so-called MacArthur amendment needed a boost, however, and Rep. Fred Upton, a Republican from Michigan, recently introduced another addition to the law: an $8 billion infusion for insurers to cover patients with pre-existing conditions.

“It’s our understanding that the $8 billion over the five years will more than cover those that might be impacted and, as a consequence, keeps our pledge for those that, in fact, would be otherwise denied [coverage] because of pre-existing illnesses,” Upton said at the White House on Wednesday.

Republican Senators in states that expanded Medicaid under Obamacare–like Ohio and West Virginia–would likely take issue with the Republican bill’s squeeze on Medicaid payments. And hard-line conservatives like Mike Lee (UT) and Ted Cruz (TX), could nudge the bill more to the right. Senate Majority Leader Mitch McConnell (R-KY) told reporters passing the bill will “be a real big challenge on the Senate side as well.”

Meanwhile, the top ranking Democrats in the House and Senate, Nancy Pelosi (CA) and Chuck Schumer (NY) respectively, strongly rejected the new Republican bill. Schumer tweeted that Upton’s amendment is “like trying to cure stage 4 cancer with cough medicine.” Pelosi, in public remarks on Thursday morning from Capitol Hill, said “Republicans are in a lose-lose situation.” She added that for Republicans supporting the Obamacare replacement bill, “This is a scar that they will carry.”

A number of health industry organizations, including the American Heart Association, American Cancer Society, and AARP, have expressed their opposition to the bill. Andrew Gurman, president of the American Medical Association, said Upton’s amendment and other changes “tinker at the edges without remedying the fundamental failing of the bill–that millions of Americans will lose their health insurance as a direct result of this proposal.”

Alec Siegel
Alec Siegel is a staff writer at Law Street Media. When he’s not working at Law Street he’s either cooking a mediocre tofu dish or enjoying a run in the woods. His passions include: gooey chocolate chips, black coffee, mountains, the Animal Kingdom in general, and John Lennon. Baklava is his achilles heel. Contact Alec at ASiegel@LawStreetMedia.com.
Share:
Related ItemsACAChuck SchumerHealth CareHouseMacArthur amendmentMitch McConnellObamacareSenate