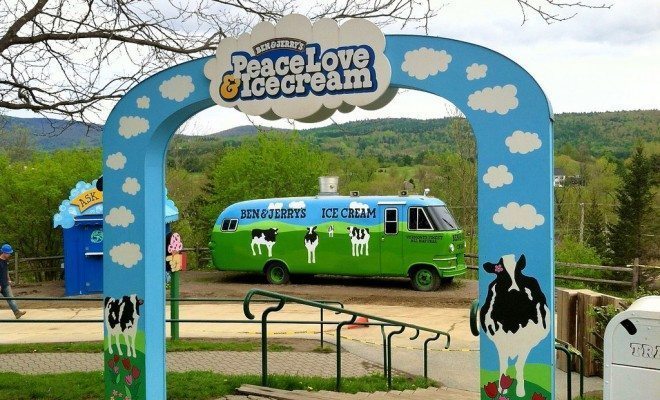 The cofounders of Ben & Jerry’s, aptly named Ben Cohen and Jerry Greenfield, were arrested at the U.S. Capitol building on Monday. Cohen and Greenfield were participating in continued protests advocating for campaign finance reform, voting reform, action on climate change, remedies to systemic inequalities, fair pay, immigration reform, pushing the Senate to consider President Obama’s nomination to the Supreme Court and a whole host of other progressive issues.

The movement that Cohen and Greenfield were participating in is called “Democracy Awakening” and is closely affiliated with the similar “Democracy Spring” movement. Protests at the Capitol have been waging on for the last few weeks, and more than 1,000 protestors have already been arrested; Cohen and Greenfield were just the latest to join the list.

It all comes down to a simple idea that we believe in whole-heartedly: if you care about something, you have to be willing to risk it all—your reputation, your values, your business—for the greater good.

Protesting injustice has been on the agenda all weekend. We’ve been in Washington, D.C. with Democracy Awakening, a remarkable event that brought together hundreds of groups and thousands of people in an effort to fix our broken democracy. There are two trends that everyone from Greenpeace to the NAACP has realized are making it impossible for much good work to get done. The first is the flood of unregulated cash flowing into campaigns and elections. And the second is the wave of attacks in many states on citizens’ right to vote.

Cohen and Greenville are certainly no strangers to getting involved in the political arena. Cohen in particular has been a very outspoken advocate for fellow Vermonter Bernie Sanders. In an interview outside a Donald Trump rally that Cohen was protesting, he explained that he had come up with the perfect Bernie-themed ice cream flavor–“Bernie’s Yearning.” According to Cohen’s explanation:

When you open up the pint, there’s this big disc of chocolate covering the entire top, and below it is just plain mint ice cream.The disc of chocolate represents the 90 percent of the wealth that has gone to the top 10 percent over the last 10 years.

The way you eat it, you take your spoon, you whack that big chocolate disc into a bunch of little pieces, you mix it around, and there you have it: Bernie’s Yearning.

According to the statement on Ben & Jerry’s website regarding their arrests, they won’t be slowing down any soon when it comes to their activism.

Anneliese Mahoney
Anneliese Mahoney is Managing Editor at Law Street and a Connecticut transplant to Washington D.C. She has a Bachelor’s degree in International Affairs from the George Washington University, and a passion for law, politics, and social issues. Contact Anneliese at amahoney@LawStreetMedia.com.
Share:
Related ItemsBen & Jerry'sBen CohenBernie SandersDemocracy AwakeningDemocracy SpringIce CreamJerry Greenfield