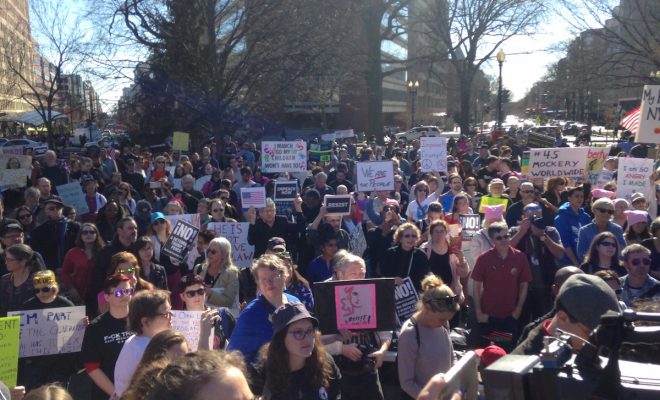 What Happened at the D.C. “Not My Presidents’ Day” Protest?

On Monday, thousands of people attended “Not My Presidents’ Day” rallies throughout the country to protest the Trump presidency. In Washington D.C., a large group gathered in Dupont Circle to listen to a number of speakers before marching toward the White House.

Lee Carter, a candidate for the Virginia State House of Delegates (50th district), was the first to address the D.C. crowd. He called for those against the president to stand up to his administration, and to “stand together and let people know that there is a viable alternative for this country going forward.”

Lindsey Middelton, a researcher at the National Institute of Health, attended the rally holding star-shaped American flag balloons and a sign demanding “respect, inclusion, and civility.” She said she “wanted the energy from the Women’s March to continue.” Middelton recalled protesting the Vietnam War, and said the protests surrounding President Donald Trump are at least equally passionate. She hopes “the public outrage affects the people downtown making decisions.”

Native and civil rights activist Gray Michael Parsons then took the stage. He spoke of the important role the media played in capturing and exposing injustice during the civil rights movement and demanded that those in the audience work to do the same. Parsons, who protested the Dakota Access pipeline in Standing Rock, North Dakota last fall, criticized the Department of Justice for not visiting the protest site and asked the crowd to “be our media…stand up for us.”

Mizraim Belman, an undocumented immigrant and first-year student at Georgetown University, stood at the center of Dupont Circle to decry the president’s hardline immigration policy. He affirmed his undocumented status before defiantly declaring that he was “unafraid” of the president’s expressed intentions.

Jordan Marie Daniels, also a native activist, stood in the center of Dupont Circle in front of a striking “Defend the Sacred” banner and asked for a continued and unified resistance in the face of an “unfit administration.” Daniels will be part of a native rights march on the White House on March 10.

At one point during rally, two men on roaring motorcycles began circling the park, attempting to drown out the speakers by revving their engines. Fixed to the back of one bike was an American flag; the other held a blue flag that read “Trump.”

Ken Boddye, a candidate for the Virginia State House of Delegates (51st district), was the last to speak in front of the crowd, and his words echoed those who spoke before him. He concluded by proclaiming that those against Trump will “not stand for his regression, hate or fear.” He, along with the other speakers, then led the rally on a march down to the White House.

Among the stream of protesters en route to the White House was Will Allen. Wearing the ubiquitous pink hat from the Women’s March and a tie-dye shirt, Allen stood to the side to speak with Law Street. He said he was protesting the endless incompetence of the Trump Administration. “It’s just one thing after another,” he said, “every day another lie, every day another story.” Before rejoining the march, Allen added: “it’s not making any sense, so we need somebody new.”

Callum Cleary
Callum is an editorial intern at Law Street. He is from Portland OR by way of the United Kingdom. He is a senior at American University double majoring in International Studies and Philosophy with a focus on social justice in Latin America. Contact Callum at Staff@LawStreetMedia.com.
Share:
Related Items#NotMyPresidentsDayDonald TrumpPresidents DayTrumpTrump ProtestWashington DC