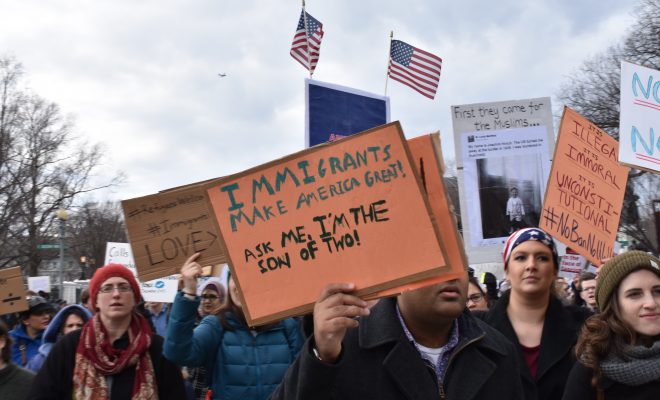 Last week, President Donald Trump issued an executive order that blocks people from seven predominantly Muslim countries from entering the U.S. for at least 90 days. All refugees will be barred for 120 days, Syrian refugees are blocked indefinitely. Thousands of people have hit the nation’s airports and city centers to protest Trump’s order. Business and religious leaders have spoken out against the travel ban. Congressmen–Democrats and many Republicans–have decried the move. But still, there are many people in America who are frightened, and there are plenty who support the executive order.

According to a recent Reuters poll, nearly half (49 percent) of the country supports the order. It’s largely split by party lines. A majority of Republicans (over 75 percent) support the ban, while roughly 20 percent of Democrats do. The poll, which gathered responses from 453 Democrats and 478 Republicans, also found that 31 percent of respondents say the ban makes them feel “more safe.” About one quarter said it makes them feel “less safe.”

Cheryl Hoffman, a 46-year-old living in Sumerduck, Virginia, told Reuters that she understands America is a nation built on immigration. “But I’m worried that refugees are coming in and being supported by my tax dollars,” she said. For some, however, Trump’s order is more than a penny-saving decision. It’s about keeping Muslims out of the U.S.

“Every story about a Muslim immigrant is that they are as American as apple pie,” Sal Oliva, a hotel worker and Uber courier from Staten Island, New York told The New York Times. “But I’m sorry, Islam is no friend of L.G.B.T. people.” Oliva, who is gay, added: “When Islam meets gay people in Somalia or wherever, they get thrown off the roof. And you expect them to be different when they move here? You can’t expect people to absorb our values.”

The Reuters poll also found that most Americans (56 percent) do not support preferential treatment for persecuted Christian minorities who live in the seven countries affected by the order. Trump contends the order has nothing to do with religion, and is not a “Muslim ban,” as many critics have been calling it. “This is not about religion,” Trump said in a statement on Friday. “This is about terror and keeping our country safe.”

Michael Bower, a 35 year-old who lives in Seattle, thinks the outrage over the order is a bit much. “Let’s just take a breather,” Bower told The New York Times. “Take a little time out. Let’s get the smart people in here and formulate a plan.” According to polling, nearly half of the country agrees.

Alec Siegel
Alec Siegel is a staff writer at Law Street Media. When he’s not working at Law Street he’s either cooking a mediocre tofu dish or enjoying a run in the woods. His passions include: gooey chocolate chips, black coffee, mountains, the Animal Kingdom in general, and John Lennon. Baklava is his achilles heel. Contact Alec at ASiegel@LawStreetMedia.com.
Share:
Related Items#NoBanNoWallExecutive OrderImmigration BanRefugee BanTerrorismTravel BanTrump