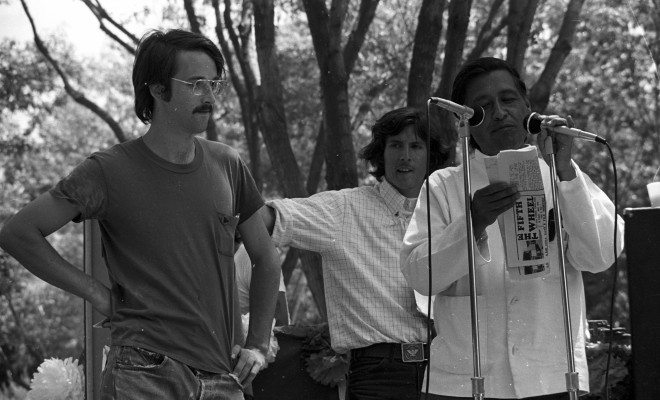 Lost Your Bid for Congress? Change Your Name!

At least, that would be the advice of political hopeful Scott Fistler, two-time loser for public office in Phoenix, Arizona. Oh wait, sorry — I mean Cesar Chavez, formerly known as Scott Fistler. While known as Fischer, Chavez ran and lost twice, yet he stuck to his guns and, determined, decided his luck would change if he changed his political affiliation and name for the low, low price of $319. Thus, another Cesar Chavez, no relation to the civil rights activist, was born! They don’t even look alike, except perhaps if you squint in a certain light. To avoid future confusion, I will, from here on out, refer to Fistler as “Chavez the Second.” Hopefully Fistler at least knows whose name he stole…

Chavez the Second figured he would fare better with his new and oh-so-original name in a heavily Hispanic, Democratic congressional district. According to Fox News, Chavez the Second’s campaign website featured photographs of frenzied supporters holding “Chavez” signs, which are obviously scenes from the streets of Venezuela at rallies for its late president Hugo Chavez. Whoops.

Chavez the Second explained his reasoning in black-and-white terms to the Arizona Republic. “It’s almost as simple as saying Elvis Presley is running for president. You wouldn’t forget it, would you?” You’re right, Chavez — we certainly wouldn’t.

He went on to tell everyone why he went against another name. “If you went out there running for office and your name was Bernie Madoff, you’d probably be screwed.” Hm, yes… logical.

This seems like a pretty bizarre move, but then again, Chavez the Second has always gone a bit against the grain. The 35-year-old’s favorite book happens to be The Sneetches by Dr. Seuss. That would be normal if he were, say, 30 years younger. I can hear the original Chavez, one of the founders of the National Farm Workers Association in 1962, rolling over in his grave. Chavez the First championed the cause of better treatment, pay, and working conditions for field workers and is considered a hero in the Hispanic community.

Ironically, after going to so much trouble to run for office as a Democrat, Chavez the Second missed the deadline to appear on the ballot. A Maricopa County Superior Court judge ruled that hundreds of signatures that Scott Fistler gathered to get on the Aug. 26 ballot were invalid, thus disabling him from running. He had the chance to appeal this decision, but missed the deadline. That’s what happens when you get distracted and procrastinate — thanks for reminding us of this important life lesson, Chavez the Second!

Chavez the Second’s own family members are peeved by his name change. His grandson, his own flesh and blood, filed a legal complaint about his grandfather, claiming that the name change would defraud voters.

It’s hard to imagine how he could have possibly lost twice in the first place considering his goals as a politician should he ever win: “Just show up there and act presentable. It’d be kind of like the first day of kindergarten,” he said. Well, at least on the first day of Kindergarten it probably seemed normal when he was seen reading “The Sneetches.”

One can only speculate what he will do if the name Cesar Chavez doesn’t pan out. Probably run as an Independent and change his name to Winnie the Pooh. That would appeal to everyone, I imagine. I can’t think of anyone who wouldn’t vote for a loveable, cartoon bear. Ah, it’s refreshing to know the direction in which politics is headed…

Marisa Mostek
Marisa Mostek loves globetrotting and writing, so she is living the dream by writing while living abroad in Japan and working as an English teacher. Marisa received her undergraduate degree from the University of Colorado in Boulder and a certificate in journalism from UCLA. Contact Marisa at staff@LawStreetMedia.com.
Share:
Related ItemsArizonaCesar ChavezName ChangePoliticsScott FistlerWinnie The Pooh