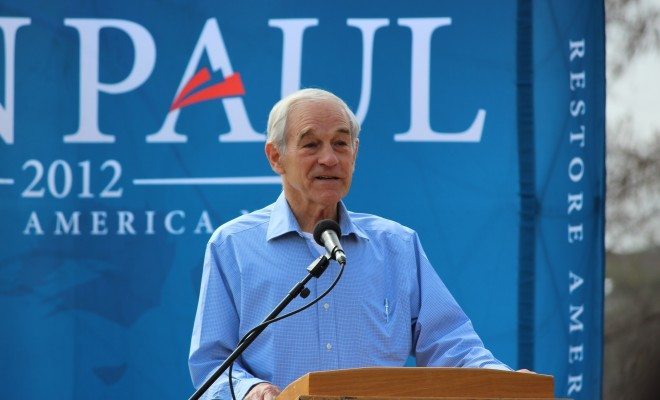 I’m a Libertarian, and You Just Might Be Too

I am a Libertarian.

Well, I think I’m a Libertarian, and I believe that this is in the same sense that I used to think I was a feminist. (I am definitely a feminist.) But everyone’s idea of what being a Libertarian actually means is still evolving.

The other day, I made this confession of politics to my roommate who is very much a Democrat. (My other roommate is a self-proclaimed Communist–it’s a very interesting household.) He responded, “Oh, so you’re one of those people who doesn’t give a shit what anybody does as long as it doesn’t affect you?” We laughed because he was joking, but it did make me think.

I’ve heard people use the word Libertarian as a replacement for Tea Party (um, no) and in association with Ron Paul (um, yes!). That’s pretty much it for references in daily life, other than the stray notion during the 2012 election that there was this mysterious third party on the fringes of society that could maybe be something someday but probably not because two-party system AM I RIGHT?

So let’s have a chat about what this term really means.

And I’ll go ahead and place my disclaimer here: I’m still learning about Libertarianism (as I think the vast majority of society is). Just as there are nuances for Republicans and Democrats (yes there are), what I think about this party won’t align perfectly with every party member.

Wanting this to be more than what the party means to me, I started where everyone seems to start in 2014–a quick Google search. The first result was the party website. Okay, I thought, this is an excellent sign. If they didn’t have a website, I might have to rethink some things.

The first thing I saw on the website was the party slogan (who knew?), which is “Minimum Government, Maximum Freedom.” Even though these are my beliefs in a grossly oversimplified form, I still started to panic. Is this crazy? Is this a viable point of view? Then, I panicked a little more when I saw the link to a quick political quiz, which asked, “Are you a Libertarian?” I… I don’t know anymore. Am I? Is my whole system of belief a sham? (I imagined the website asking me in an intimidating, booming voice. I don’t know why.)

Well, I took the quiz and easily landed in the little Libertarian sector. My results didn’t show perfect 100 percent Libertarianism, but that wasn’t what I was expecting. (Side note: The quiz is literally ten questions, I highly recommend it just because it’s interesting.)

Having reaffirmed my party choice, I started to explore its values. First, let’s revisit the slogan. While to me “Minimum Government, Maximum Freedom” sounds heavy-handed, “We Should Reduce the Size of Government so Citizens can Have the Utmost Freedom and Control Over Their Own Lives Except When They Need to be Protected from Unjust Harm” just doesn’t have the same snappy ring to it. I would consider “Socially Liberal, Fiscally Conservative” a strong contender, but it’s probably a bad idea to create a party identity that relies on other parties’ definitions.

Then they have this excellent little table that shows the differences between Libertarians, Democrats, and Republicans; however, it’s a little smart-ass-y and doesn’t go into further details, so I’ll explain a few of these that I think exemplify key Libertarian traits.

On education: “Return control to parents, teachers, and local communities.” Essentially, Libertarians believe education shouldn’t be standardized (or, in my belief, as standardized) so a teacher can find what works for his or her classroom. In addition, not all teaching responsibility should be laid on the school system, as learning starts at home. I realize that one can’t count on all parents to value their child’s education (which is a sentence that makes my heart sad), but right now we’re talking about party ideals, not the complexities of execution.

On the war on drugs: “End it! Release non-violent prisoners. Allow medical cannabis.” Why are we spending taxpayer dollars incarcerating someone who wanted to smoke a little weed? Plus, there’s a grievous sentencing disparity in drug-related crimes. Ignoring the racial aspect of drug arrests (because that’s a whole other blog post), punishment for drug offenses is often just plain excessive. As of January of this year, at least 25 people were serving or had served life in prison for selling pot–and not all were at the top of distribution, either. Life. In. Prison. For a nonviolent crime. While rapists and murderers get released. Let me tell you, I would much rather have someone try to sell me drugs than rape or murder me. And that goes for my hypothetical children, too (since the default argument is always “think of the children”). In addition, if medical marijuana can ease a patient’s discomfort (especially in terminal or very series cases), why would we say no? All pharmaceutical drugs used to treat patients come with risks, too. Quite frankly, I’m a little surprised the chart doesn’t just say legalize marijuana use, but maybe that’s still just a little too radical to put on an entire party’s platform.

On military spending: “Reduce spending dramatically. Defense, not offense.” It’s worth noting that these idealistic cuts in military spending come with cuts pretty much across the board. Libertarians aren’t antimilitary, they just aren’t imperialists. Let’s stay out of other countries unless invited or needed to ensure our own welfare. I agree this gets tricky when atrocities are happening abroad, and I’m all for lending a helping hand in theory, but it’s also not quite kosher to storm another country in the name of help at the cost of hundreds or thousands of lives that get caught in the crossfire.

On taxes: “End the income tax. Abolish the IRS. Never raise taxes.” I realize a good portion of readers just rolled their eyes, and I get it, I really do. I’m not sure if we could ever even get to a point where the IRS could be abolished. But I do firmly believe that our tax system is broken, quite possibly beyond repair. And I think if we can’t end the income tax, it should at least be drastically reduced. I would be a lot more comfortable giving my money to the government if they could manage it responsibly, but they just haven’t proven that yet.

This was a central idea Ron Paul expressed when he came to my alma mater, the University of Missouri — Columbia. I wish I could quote him directly, but it was in 2012. Although this was a nearly spiritual experience for me because it was the first time I heard a politician speak and my views aligned accordingly, I can’t quote the Bible, either. However, Ron Paul did a great interview with Charlie Rose in which he defines Libertarianism as nonintervention.

Note: During the video they make the association with the Tea Party again. I still deny this. Maybe there’s something I don’t get about the Tea Party, but these are still two distinctive groups as I understand them. Maybe the Tea Party is the more socially conservative cousin of Libertarianism?

Now, just because I love Ron Paul doesn’t mean I agree with 100 percent of what he says, but I thought this video contained a lot of really good explanatory moments, as well as a few that would need to be elaborated on or revised completely.

I would say one of the biggest concerns about Libertarianism is that it is idealistic. In an ideal world, people wouldn’t need to be policed. But we don’t live there, and I get that. That’s where compromise comes in. I am all for having some standards in education, and I think even if it’s a personal choice to do meth, there are a lot of social, environmental, and safety risks to its production and use. To me, the point of Libertarianism is pushing the government out of where they aren’t needed and reforming the areas where the government is needed to heal a broken system. Stop creating laws to repeal laws–just abolish the unnecessary or archaic ones. Simplify taxes to where an average human can understand them. Don’t tell a group of people they can’t get married so you don’t have to justify your values to your children.

Maybe this third party is just a way for me to rebel against an infuriating system, but maybe the system as it stands is something worth rebelling against.

Kelsey Kennedy
Kelsey Kennedy is a freelance editor with degrees in Magazine Journalism and Performance Theatre from the University of Missouri, Columbia (MIZ!). When she isn’t out exploring New York, she loves getting far too invested in characters on the page, stage, and screen. She ultimately wants to make a difference in the world and surround herself with creative people. Contact Kelsey at staff@LawStreetMedia.com.
Share:
Related ItemsDemocratDrug WarEducationGovernmentIRSLibertarianMilitary SpendingPoliticsRepublicanTea PartyTwo-Party System