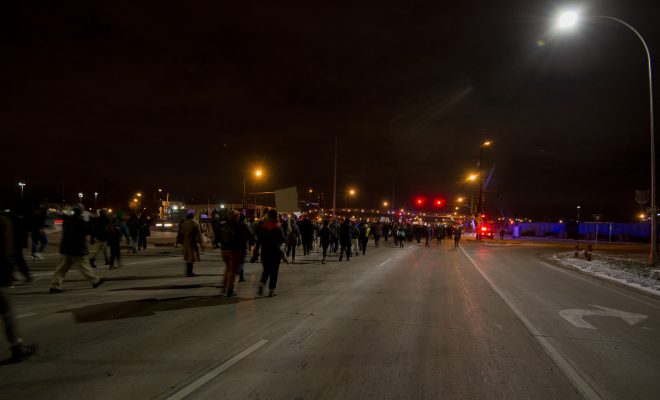 From the Nashville sit-ins in the 1960s to the Memphis sanitation workers’ strikes, Tennessee has a rich history of practicing civil disobedience in the form of nonviolent protests. And recently, Tennessee has seen a resurgence of nonviolent protests. On Inauguration Day, a group of Tennesseans chained themselves to the state capitol. About 15,000 people marched in downtown Nashville on the day of the Women’s March. And, this past July, hundreds of Black Lives Matters protesters spilled onto the interstate, stopping traffic. But in response to this civic action, a Tennessee lawmaker introduced a road block bill that grants drivers who “[exercise] due care” immunity from civil liability if they injure a protester or demonstrator who is blocking traffic.

According to Tennessee’s WTVC News Channel 9, state Senator Bill Ketron, who introduced the bill, said in a statement, “we believe that citizens have the right to protest. There is a procedure for peaceful protests and the purpose of that process is to protect the safety of our citizens. Protesters have no right to be in the middle of the road or our highways for their own safety and the safety of the traveling public.”

There are two distinctions in the bill that should be noted. The first is that if a person takes purposeful or willful action to injure a protester, they will not be granted immunity from civil liability. The second distinction is that the law does not grant immunity from criminal prosecution.

Tennessee lawmakers said that this bill was introduced to protect both drivers and protesters. As the Epoch Times points out, states like North Dakota have introduced similar legislation. If Tennessee’s bill passes, it will go into effect this summer.

At first glance, these kinds of bills aren’t erroneously offensive. But at the heart of these bills, there is a fundamental misunderstanding of the core principles of civil disobedience.

Protesters and demonstrators do not simply block roads for the sake of inconveniencing people who are just trying to have a normal commute. Blocking traffic is a visceral statement that reminds people that some lives are inherently inconvenient–that some lives come with inherent roadblocks simply based on trivialities like the color of someone’s skin or who a person loves. Blocking traffic impedes the inexplicit conveniences that privilege bestows.

We can look at Tennessee’s road-block bill uncynically. We can hold the belief that the bill was introduced with the best of intentions–with the belief that these lawmakers truly want to look after the safety of the public. But we can also maintain the perspective that the bill ignores the principles of non-violent protests and continues to allow people to abrogate their responsibility to help society progress toward moral justice in service of letting them go on with their lives as if everything is as it should be, and nothing is wrong.

Austin Elias-De Jesus
Austin is an editorial intern at Law Street Media. He is a junior at The George Washington University majoring in Political Communication. You can usually find him reading somewhere. If you can’t find him reading, he’s probably taking a walk. Contact Austin at Staff@Lawstreetmedia.com.
Share:
Related ItemsBlack Lives MatterCivil DisobedienceMemphisNashvilleProtestTennesseeTrump