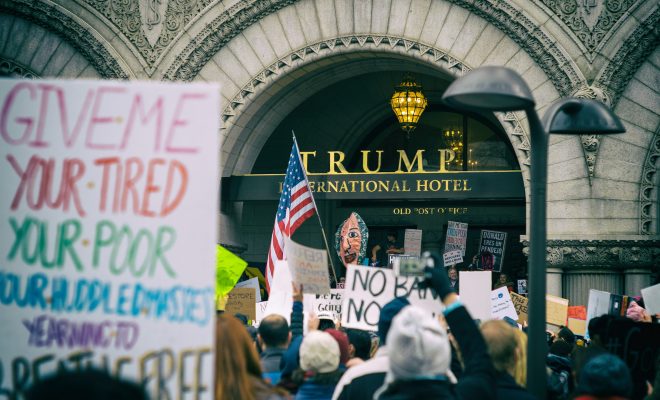 When Donald Trump signed an executive order that banned travelers from seven predominantly Muslim countries, it came as a shock to most people. All of a sudden, families were stranded abroad, students couldn’t return to school, and refugees from war zones were denied entry. But immigration lawyers had suspected this was coming, based on rumors from the White House, and had already begun to prepare. Last Wednesday, a group of lawyers from the Urban Justice Center called for additional attorneys who could volunteer at airports where refugees were scheduled to arrive, in case an order like the one that came on Friday was announced. When that exact thing happened, lawyers willing to volunteer headed to airports across the country.

In New York, Andre Segura, a lawyer with the American Civil Liberties Union (ACLU) arrived at JFK International Airport and said that one section of the airport was completely flooded by lawyers. “There were attorneys from numerous major law firms, nonprofits, all working together,” he said. “I’ve never seen that immediate coming together of teams to start filing actions to try to protect people.” Thousands of Americans protested outside airports, as lawyers were inside trying to talk to family members of detained travelers and offer their legal services pro bono. Many of these lawyers didn’t sleep all night and didn’t eat. Pictures on social media showed them sitting on floors, with laptops and phones connected to the airport’s power outlets.

On Saturday night, Federal Judge Ann Donnelly announced that people with valid visas could not be sent back to where they came from, as there “is imminent danger” that there will be “substantial and irreparable injury” if they are sent back. Big crowds of people had gathered outside the courthouse and cheered the decision, but the lawyers’ work had just started. The judge’s ruling only specifically said not to send travelers back, but did not say that the detained were free to enter the U.S.

On Sunday, Customs and Border Protection Agents defied the court order, according to several congressmen and lawyers. “Four members of Congress asked CBP officials to enforce a federal court order and were turned away,” wrote Representative Don Beyer on Twitter. In New York, an Iranian Fulbright scholar was put on a plane to be sent back to Iran several hours after the airports had received orders to stop sending people away. She was forced onto an airplane, where she asked the crew to let her out but was ignored. The plane started preparing for takeoff before attorneys finally managed to persuade officials to let the woman out. Becca Heller, director of the International Refugee Assistance Project, said on Sunday that CBP agents handcuffed people, forced them onto departing airplanes, and tried to make detainees surrender their green cards.

As New Yorkers we have no tolerance for intolerance and that’s what we’re going to stand up and say. pic.twitter.com/1b85T3bD6h

One of the most difficult tasks for the lawyers was to determine how many people were in custody, as customs officials wouldn’t provide an answer, despite pressure from congressmen and New York Mayor Bill de Blasio’s office. This meant that the lawyers needed to improvise most of their work, handwriting signs stating “immigration lawyer” in the hope that family members of detained people would approach them for help. Many lawyers were also shocked by what they were witnessing. “I’ve never seen anything like this in my practice. Maybe if we look back to Chinese exclusion laws in the 1800s,” said one of the volunteer lawyers, Jonathan Mulligan.

I repeat: A FIVE YEAR OLD BOY was detained and kept from his mother at a US airport. In our name. And Team Trump wonders why the outcry?

Some volunteer lawyers were physically at the airports, but other lawyers worked on litigation from their offices. “I was sitting at my desk working on a template habeas petition that could be used by lawyers at airports all around the country,” said Cecillia Wang, deputy legal director of the ACLU. Omar Jadwat, director of the ACLU’s Immigrant Rights Project, said getting together the paperwork that led to the judge’s stay was not an easy task; they didn’t have anything prepared in advance but had to rush to get something together when Trump’s order came.

And even after the judge’s order, confusion ruled at airports. On Monday it was still unclear how many people remained detained. Although the Department of Homeland Security claimed that everyone had been released, attorneys say that claim is impossible to verify, as the department still hasn’t released a list of names. Judge Donnelly also ordered government attorneys to hand the ACLU a complete list of names of those who were detained, but they have yet to comply. In Washington D.C., some lawyers who were told there were no detainees left at the airport suspect that they have secretly been taken to detention centers, despite the court order.

We are being told there aren’t any there. We also believe they are being taken to detention facilities. Updates when we get them. https://t.co/zuCHaLD9yE

But a tweet by the volunteer group at JFK suggests that only one person was still in custody late Sunday night. Though those numbers are not officially confirmed, it seems hopeful, largely thanks to the hard work of these lawyers.

Emma Von Zeipel
Emma Von Zeipel is a staff writer at Law Street Media. She is originally from one of the islands of Stockholm, Sweden. After working for Democratic Voice of Burma in Thailand, she ended up in New York City. She has a BA in journalism from Stockholm University and is passionate about human rights, good books, horses, and European chocolate. Contact Emma at EVonZeipel@LawStreetMedia.com.
Share:
Related ItemsACLUAirport ProtestsAirportsAttorneysBanCourt OrderDonald TrumpImmigrantsLawyersMuslim BanProtestsRefugeesTrump