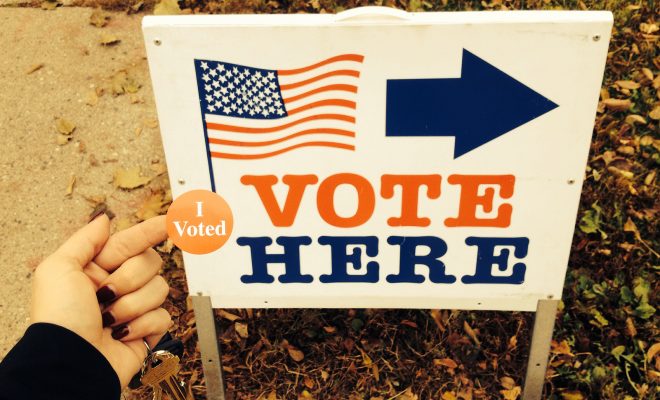 The Fourth Circuit Court of Appeals struck down a North Carolina voting law on Friday, concluding that it was passed with clear “discriminatory intent.”

The ruling forcefully reversed a district court finding that did not acknowledge the law’s intent to discriminate. In the ruling, Circuit Court Judge Diana Gibbon Motz writes,

In holding that the legislature did not enact the challenged provisions with discriminatory intent, the court seems to have missed the forest in carefully surveying the many trees. This failure of perspective led the court to ignore critical facts bearing on legislative intent, including the inextricable link between race and politics in North Carolina.

Motz, also writing for judges James Wynn and Henry Floyd, goes on to note that the sequence of events that led to the law provides sufficient evidence to conclude that the law intentionally sought to restrict voting rights of African American voters in clear violation of the Voting Rights Act.

While many argue that voting laws like the one in North Carolina are passed for partisan reasons–by focusing on minority communities that traditionally vote for Democrats, Republican legislators may be seeking an electoral edge–the way this law in particular targeted race amounts to racial discrimination. And yes, challenges to these laws could also be considered partisan efforts on behalf of the Democrats as well, but the racial focus here appears to take it a step further.

A Quick Look at the Voting Rights Act

To understand this case in North Carolina, it’s important to understand the Voting Rights Act. Congress passed the VRA in 1965 to ensure that African Americans and all minority voters would not be discriminated against at the polls.

The law took a particularly active approach to dealing with an enormous challenge. It created a formula to identify states and locales where voting was polarized by race and then added additional safeguards to changing voting laws there. Section 4 of the law created that so-called “coverage formula,” and coupled it with a preclearance requirement in Section 5. That requirement mandated that state and local governments falling within the coverage formula get explicit approval from the Department of Justice before changing voting laws.

The law also maintains provisions to ensure that race-based discrimination does not happen and places redistricting requirements on states to ensure minority representation, among other protections. But the preclearance requirement and coverage formula took the center of attention in an infamous Supreme Court ruling in 2013. That case, Shelby County v. Holder, struck down the coverage formula and ended the preclearance system as it existed at the time. Justice Roberts, who wrote the 5-4 opinion, concluded that the law employed “extraordinary measures to address an extraordinary problem,” but that those measures are no longer needed. He went on to argue that the coverage formula used to determine which areas require preclearance now violates states’ rights and equal sovereignty as laid out in the 10th Amendment.

Since that ruling, governments have been free to change their voting laws as they see fit without the need for preclearance from the Justice Department. And that brings us to the recent challenge in North Carolina.

Judge Motz notes in the ruling that between 2000 and 2012–a period when preclearance was needed for to all statewide and many local voting law changes in North Carolina–registration and participation surged among black voters. By 2012, black voter registration had increased by about 50 percent and turnout nearly reached parity with that of white voters, at about 70 percent. But shortly after the Supreme Court issued its Shelby County ruling, the state assembly began the process to overhaul its voting laws. According to the ruling, the new law would have several effects on black voters in the coming November election:

In cases like this, it is particularly difficult to prove that a legislature acted with discriminatory intent, but the court concluded that there was enough evidence to indicate that race was central to the new law. That holds true, according to Motz, even if it was done for partisan reasons and not outright racial hatred or racism. The ruling notes that almost immediately after the Shelby County opinion came down in June 2013, the North Carolina legislature began drafting new voting restrictions. It also notes:

Before enacting that law, the legislature requested data on the use, by race, of a number of voting practices. Upon receipt of the race data, the General Assembly enacted legislation that restricted voting and registration in five different ways, all of which disproportionately affected African Americans.

This indicates that shortly after the state did not need preclearance to pass a new voting law, it looked into how certain voting practices related to race, and then passed a new law limiting certain practices. Based on that sequence of events, the court ruled there was clear intent to discriminate based on race.

While the ruling effectively struck down the law, the court declined to use another section of the Voting Rights Act to impose a preclearance requirement on North Carolina after finding discriminatory intent. Essentially, it chose not to reinstate the preclearance requirement on the state using a different part of the VRA. As Rick Hasen–a law professor at University of California, Irvine–notes in a blog post, the state can still appeal the ruling to the Fourth Circuit en banc, which means that all of the judges, not just the original panel of three judges, would review the case. It could also appeal to the Supreme Court, but as Hasen notes, the court may not decide to hear the case given its current eight justice makeup and the Circuit Court’s decision not to implement a preclearance requirement.