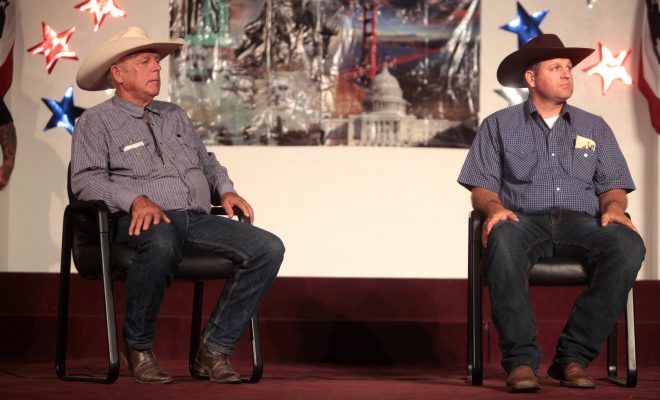 The Bundy Brothers’ Trial is About to Start: Here’s What You Need to Know

The trial in the Bundy brothers’ Oregon standoff case–when armed activists led an occupation of a wildlife refuge for 41 days–is getting closer. On Wednesday jury selection started and the first statements are scheduled to begin on September 13. The case already has plenty of attention online.

They’ve been charged with conspiracy to impede federal officers and possession of firearms in a federal facility. In total 26 people were charged but only seven are going to trial now. Seven more are going to trial early next year and the rest have already pled guilty.

Journalists were live-tweeting from court on Wednesday, fascinated with the nature of the case. The Bundy brothers’ lawyer had argued that his clients need to be allowed to wear cowboy boots, because they are cowboys.

2a. Mumford first giggled a bunch about the jail issued shoes, calling them “urban loafers.” Jdg Brown: “I do not find it comical at all”

2c. Ammon Bundy: “I prefer to be wearing boots.”

It all started when two farmers, a father and son, were convicted for arson on government land in 2001. Dwight and Steven Hammond claimed they started a controlled fire on their land to get rid of weeds and brushwood that could cause wildfires, but that they lost control over the fire. They turned themselves in in January of this year and were given the minimum sentence of five years, but this caused some local supporters to start protesting. The leaders of the protests were the sons of Cliven Bundy, who had a separate previous standoff with federal authorities in Nevada. Bundy claimed the government was just trying to punish the Hammonds for not selling their land. The government, on their hand, said the Hammonds tried to cover up poaching activity with the fire.

Currently on trial (and pictured below) are Ammon Bundy, Ryan Bundy, Shawna Cox, David Lee Fry, Jeff Wayne Banta and Neil Wampler. Kenneth Medenbach is missing from the picture below.

The protesters didn’t give up, and instead occupied a federal building until they got what they wanted. The group, led by the Bundys, started calling themselves Citizens for Constitutional Freedom and one of their viewpoints was that the government owns too much land and misuses that land. The fact that the group was opposed to the government and was armed led some to call them domestic terrorists. But they continue to paint themselves as cowboys and freedom fighters.

A picture from the courtroom illustrates the jury selection.

NOW: 31 potential jurors vetted by Judge Brown. Asked how much media exposure they had to the case. #Oregonstandoff pic.twitter.com/V1kEyyP4LN

Most of the arrests were made during a traffic stop on January 26, in which the spokesperson for the new movement, LaVoy Finicum, was fatally shot.

The trial is expected to take even longer than the occupation did. The protesters claim they were just using their First Amendment rights to peacefully protest, and their Second Amendment rights to carry licensed guns. The brothers’ father, Cliven Bundy, is also facing trial in Nevada, because of another standoff near his cattle ranch in 2014. That trial will take place in February in Nevada.

Emma Von Zeipel
Emma Von Zeipel is a staff writer at Law Street Media. She is originally from one of the islands of Stockholm, Sweden. After working for Democratic Voice of Burma in Thailand, she ended up in New York City. She has a BA in journalism from Stockholm University and is passionate about human rights, good books, horses, and European chocolate. Contact Emma at EVonZeipel@LawStreetMedia.com.
Share:
Related ItemsBundyBundy BrothersConspiracyCowboysDomestic TerrorismFreedom FightersOregonOregon StandoffStandoffTrialTrials News