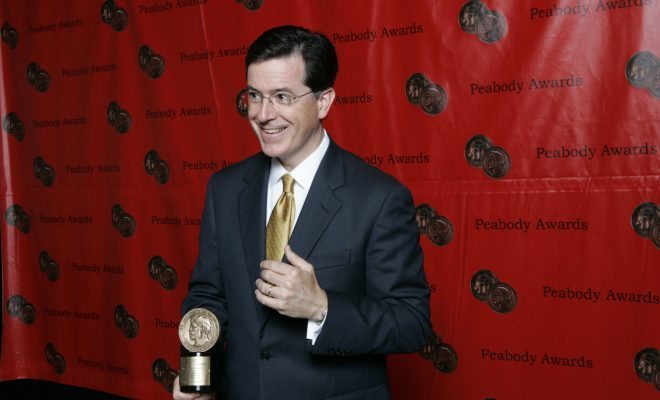 "The Colbert Report" courtesy of [The Peabody Awards via Flickr]

It appears that Stephen Colbert doesn’t own “Stephen Colbert.” Rather, Colbert, the host of CBS’s “The Late Show,” doesn’t own the rights to the character he developed and played for almost 20 years on Comedy Central.

On Wednesday, Colbert announced on his show that the “Stephen Colbert” character from “The Colbert Report” is the intellectual property of Viacom, Comedy Central’s parent company, and would “never be seen again.” In response to disappointed “boos” by the audience, he responded, “I understand, but what can I do? The lawyers have spoken. I cannot reasonably argue I own my face or name.”

Last week, he brought back his former alternate persona in order to make sense of the Trump nomination, using one of his signature bits called “The Word.”

After the show aired, however, “corporate lawyers” from Colbert’s former network allegedly reached out to claim their IP over the character. “Stephen Colbert,” the faux-conservative newsman, was a feature on Comedy Central’s “The Daily Show” before receiving his own show on the network in 2005. Last year, Colbert retired the character after taking over for David Letterman on CBS.

So far, there is no news on whether Viacom’s legal team has fired back to challenge the eerie similarities between the new “Colbert” and his retired cousin.

The Hollywood Reporter notes the legal complexities surrounding this case, and explains why “Stephen Colbert’s identical twin cousin” may avoid copyright infringement claims and may actually be able to qualify for its own copyright. However, the article notes that if the new character earns a separate copyright, it would probably be owned by CBS rather than Colbert himself. So, let’s hope that Colbert stays where he is, otherwise, he may need to pull out another extended family member if he wants his satirical alter-ego to live on.

While Colbert himself may have abandoned his Comedy Central show last year, it appears he hasn’t let go of the character that millions have grown to love.

Mariam Jaffery
Mariam was an Executive Assistant at Law Street Media and a native of Northern Virginia. She has a B.A. in International Affairs with a minor in Business Administration from George Washington University. Contact Mariam at mjaffery@lawstreetmedia.com.
Share:
Related ItemsCBSColbertComedy CentralStephen ColbertThe Colbert ReportThe Late ShowTrumpViacom