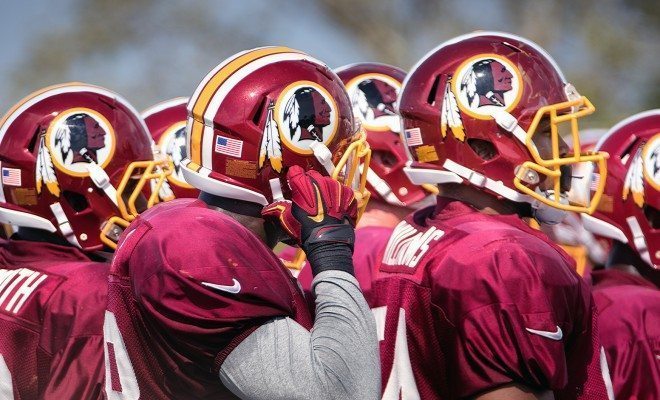 Appeals Court Okays Trademarking Offensive Names: How Will it Affect the Redskins?

The trademark–and public opinion–war over the Washington Redskins has been waging on for a while. But there’s a new development in the form of a ruling from an appeals court that may impact the Redskins’ ability to keep their offensive name. The U.S. Court of Appeals for the Federal Circuit in Washington, D.C. just struck down a provision of federal law that prevented the copyrighting of offensive names on First Amendment grounds.

The case in front of the appeals court involved a band called “The Slants,” an Asian-American group led by a man named Simon Tam who chose their name in an attempt to “reclaim” the traditionally-derogatory phrase.

The band became embroiled in a legal dispute after it attempted to file for trademarks; the United States Patent and Trademark Office (PTO) refused the filing. Particularly at issue was something called the Lanham Act, which was passed in 1946, and “prohibits registration of marks considered scandalous or immoral.” However, the recent appeals court ruling decided that parts of the applicable section (2a) were unconstitutional, stating:

The government cannot refuse to register disparaging marks because it disapproves of the expressive messages conveyed by the marks. It cannot refuse to register marks because it concludes that such marks will be disparaging to others. The government regulation at issue amounts to viewpoint discrimination, and under the strict scrutiny review appropriate for government regulation of message or viewpoint, we conclude that the disparagement proscription of § 2(a) is unconstitutional. Because the government has offered no legitimate interests justifying § 2(a), we conclude that it would also be unconstitutional under the intermediate scrutiny traditionally applied to regulation of the commercial aspects of speech. We therefore vacate the Trademark Trial and Appeal Board’s (“Board”) holding that Mr. Tam’s mark is unregistrable, and remand this case to the Board for further proceedings.

Obviously the case of the Slants and the case of the Washington Redskins are very different–one is a band using a racial slur in an effort to reclaim it, the other is a massive sports franchise using a racial slur despite its implications. Those nuances exist in a socio-political sense, but in a legal sense, the cases are very similar. The appeals court didn’t rule that the Slants could use their name because of the way they were using it, but rather because of First Amendment issues–ones that also could apply to the Redskins.

The Washington Redskins’ case is under review by the 4th Circuit Court of Appeals, and some legal experts have predicted that it may make its way all the way to the Supreme Court. Since the Lanham Act was passed over 60 years ago, a lot has changed, including the inception of Constitutional protection for commercial speech. But given that the Redskins’ case–which is based on very similar grounds–is making its way through the court system, the fact that another appellate court found that the applicable provisions of the Lanham Act were unconstitutional could end up being pretty convincing for the court hearing the appeal. Ultimately, the question of “offensive speech” as it relates to trademarks is far from being answered.

In light of the Redskins’ recent win that garnered the team the NFC East title, the debate over the team’s name remains hot and heavy. I got the chance to talk about the case with Professor Robert Sherwin, who teaches at Texas Tech University School of Law, and is an expert in federal civil procedure and First Amendment Law. He pointed out that while this ruling may not necessarily persuade the federal judges in the Redskins trademark case, the fact that the U.S. Court of Appeals for the Federal Circuit in Washington D.C. accepted that part of the Lanham Act is unconstitutional–and was the first court to do so–is noteworthy. Sherwin also shared that this is likely “a big ticket kind of case” and an issue headed for the Supreme Court, although it’s yet to be seen which case the Supreme Court will decide to take on.

Sherwin also highlighted a similar First Amendment Case, decided by SCOTUS just last summer–Walker v. Texas Division, Sons of Confederate Veterans, Inc., in which the court decided 5-4 that the government wasn’t violating free speech when it rejected a Confederate Flag license plate design. However, in a move that surprised many, it was Justice Clarence Thomas who sided with the more traditionally liberal wing of the court to decide that it was not a First Amendment violation. Sherwin pointed out that both sides could use Walker in their arguments, and that the decision could hinge on Thomas, who is “probably the court’s foremost expert on First Amendment issues” when the case makes it the Supreme Court.

There’s a lot that’s up in the air right now when it comes to the Redskins’ name–the recent decision as it relates to the Slants may have only further muddied the waters. But one thing seems almost inevitable to many of us keeping an eye on these cases–this is something that the Supreme Court will have to weigh in on sooner or later.

Anneliese Mahoney
Anneliese Mahoney is Managing Editor at Law Street and a Connecticut transplant to Washington D.C. She has a Bachelor’s degree in International Affairs from the George Washington University, and a passion for law, politics, and social issues. Contact Anneliese at amahoney@LawStreetMedia.com.
Share:
Related ItemsCopyrightdan snyderLanham ActPTORedskinsTrademarkWashington Redskins