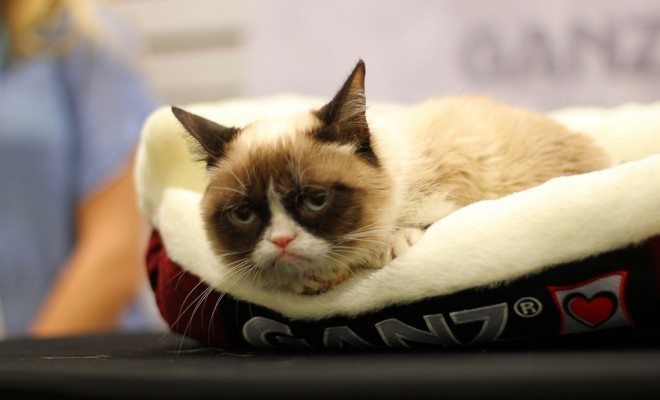 Almost everyone recognizes the familiar mug of Grumpy Cat, a.k.a. Tardar Sauce. But what you might not know is that her likeness is actually owned by a company, Grumpy Cat Ltd., a multi-millionaire dollar merchandising brand. Now, Grumpy Cat Ltd. is suing a coffee company, Grenade Beverages, over copyright claims.

The complaint filed by Grumpy Cat Ltd. goes into Grumpy Cat’s meteoric rise to success in a way that is truly entertaining to discover in legal papers. The complaint states:

After a picture of Grumpy Cat was posted to the internet in 2012, her name and likeness spread like wildfire across the globe garnering worldwide media attention. GrumpyCat has since appeared in numerous major television shows (including Today, Good Morning America, American Idol, and The Bachelorette,) has been featured on the front page of major periodicals such as The Wall Street Journal and New York Magazine, starred in advertisements for Cheerios and McDonalds, starred in her own Lifetime Television Christmas movie, “authored” three (3) books that debuted on the New York Times bestsellers list, and even has her own animatronic waxwork at MadameTussauds in San Francisco.

Grenade Beverages’ partner Paul Sanford told Eater that “there isn’t a single factual allegation contained in the entire complaint, not one.” It will be interesting to see how this case fares in court, but it seems like Grumpy Cat’s company is in it to win it–the complaint even began: the “Defendants’ despicable misconduct here has actually given Grumpy Cat and her owners something to be grumpy about.”

Anneliese Mahoney
Anneliese Mahoney is Managing Editor at Law Street and a Connecticut transplant to Washington D.C. She has a Bachelor’s degree in International Affairs from the George Washington University, and a passion for law, politics, and social issues. Contact Anneliese at amahoney@LawStreetMedia.com.
Share:
Related ItemsCoffeeGrenade BeveragesGrumpy CatGrumpy Cat Ltd.MemeTardTardar Sauce