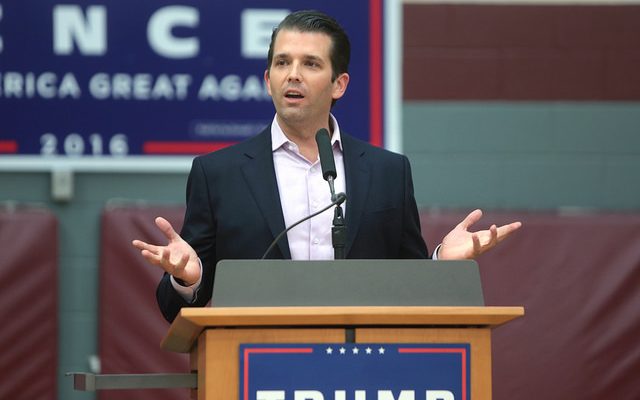 The New York Times published a profile on Donald Trump Jr. this week that included an awkward “outdoorsy” photo of the first family member at his father’s estate in Bedford, NY. President Trump’s eldest son is pictured in the featured photo sitting on a tree stump wearing a flannel shirt, blue jeans, and a pair of hiking boots that are fresh out of the box.

Donald Trump Jr. decided early on not to measure himself against his father https://t.co/HXIxaRxHOV

While Donald Sr. has shown he’s comfortable with stump speeches, Don Jr. seems very uncomfortable on his stump. Needless to say, Twitter latched on to the meme-ready image, mercilessly mocking him and his lumberjack attire.

how is he so bad at sitting? pic.twitter.com/Jg7cTMfDcc

Callum Cleary
Callum is an editorial intern at Law Street. He is from Portland OR by way of the United Kingdom. He is a senior at American University double majoring in International Studies and Philosophy with a focus on social justice in Latin America. Contact Callum at Staff@LawStreetMedia.com.
Share:
Related ItemsDonald Trump Jr.MemePresident Donald TrumpStumpTwitter