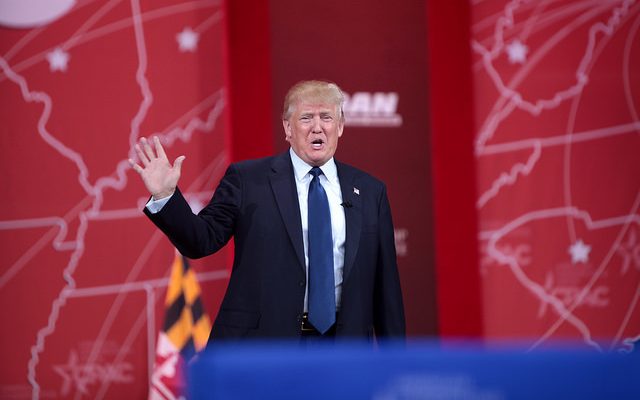 The decision was an unmitigated loss for Trump. And what does President Trump usually do when things don’t go his way?

He has his communications team release a measured and coherent statement reiterating the White House’s position on the issue.

He tweets about it.

So, after the decision was announced, Trump vented his frustrations on the beautifully insufferable and addictive cesspool that we call Twitter.

SEE YOU IN COURT, THE SECURITY OF OUR NATION IS AT STAKE!

SEE YOU IN COURT WHERE WE ALREADY ARE BUT A DIFFERENT COURT SHUT UP NO YOU’RE STUPID!

Saying “SEE YOU IN COURT” after losing a court case is like yelling “LET’S TAKE THIS OUTSIDE” after you just lost a fight outside.

“I’LL SEE YOU IN COURT!” is really the worst thing to yell after you just lost in court

SEE YOU IN COURT! I HOPE THAT BALIFF WITH THE PUPPET OF HIMSELF IS THERE. I LOVE THAT PUPPET! CRACKS ME UP! pic.twitter.com/SdVJBwJAkG

And then he tweeted…..
“SEE YOU IN COURT”
After just LOSING IN COURT‼️ pic.twitter.com/RZrku9Pp1C

Nap, then therapy, where I will very likely be told to stay off twitter. SEE YOU IN COURT

An all caps “I’LL SEE YOU IN COURT” is the whitest thing to ever happen in black history month.

{loses in checkers} SEE YOU IN CHECKERS

My teacher: F
Me: SEE YOU IN COURT!

me if Beyoncé doesn’t sweep the grammys https://t.co/5JiXwFeIys

TRUMP: SEE YOU IN COURT

SEE YOU IN COURT, DONALD. pic.twitter.com/yqIhRjDClC

“SEE YOU IN COURT” is what the rich white villain in a dance crew movie yells after he loses a rec room turf battle to a bunch of teens.

LET’S TALK ABOUT THAT COMMA pic.twitter.com/BRz3g44WJM

Twitter is so beautiful sometimes. Watching this entire mess reminded me of something. Last night, I just couldn’t put my finger on it, but I suddenly had a revelation this morning.

I want to remind you all of a true classic in American cinema: “Air Bud.”

If you will recall, “Air Bud” is the story about a golden retriever, who is later renamed “Buddy,” who runs away from his abusive owner, a professional clown who is also an alcoholic (this movie has many layers). He then forms a relationship with a teenaged boy who just lost his father in a plane crash. Basically, Bud and the teenage boy form a bond and it’s really beautiful. Oh, also, Bud can play basketball. And he becomes famous. Again, many layers to this film. Anyway, Buddy’s old owner tries to get him back and, in a very tense scene, confronts his dog’s new owners. Check it out starting at 19:49 below:

If you’re interested, you can watch the full movie on a random afternoon on the Freeform channel (formerly ABC Family), probably. Or in your old VHS collection. Either one is a sure fire bet.

There’s no telling what Trump means exactly by “SEE YOU IN COURT,” but today, during a joint press conference with Japanese Prime Minister Shinzo Abe, Trump said “We’ll be doing something very rapidly having to do with additional security for our country, you’ll be seeing that sometime next week. In addition, we will continue to go through the court process and ultimately I have no doubt that we’ll win that particular case.”

Austin Elias-De Jesus
Austin is an editorial intern at Law Street Media. He is a junior at The George Washington University majoring in Political Communication. You can usually find him reading somewhere. If you can’t find him reading, he’s probably taking a walk. Contact Austin at Staff@Lawstreetmedia.com.
Share:
Related Items9th U.S. Circuit Court of AppealsAbandonmentAir BudBanCourtImmigration BanTrumpWhite House