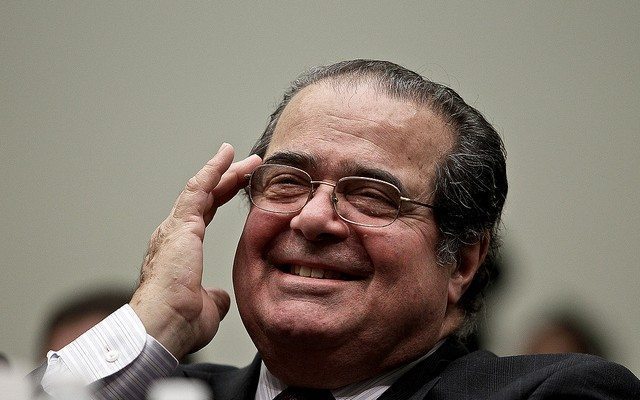 Today the Supreme Court handed down an historic ruling on marriage, striking down state laws that ban same-sex marriage. Always one to out-do himself, Justice Scalia delivered a dissenting opinion of immense rhetorical heft, perhaps even better than his Obamacare dissent. Here are the highlights:

10. “The stuff contained in today’s opinion has to diminish this Court’s reputation for clear thinking and sober analysis.”

Hey, Ginsburg was drunk at ONE State of the Union, don’t hold it against her.

9. “Today’s decree says that my Ruler, and the Ruler of 320 million Americans coast-to-coast is a majority of the nine lawyers on the Supreme Court.”

No, I’m pretty sure this guy still rules everything that the light touches.

8. “Hubris is sometimes defined as o’erweening pride; and pride, we know, goeth before the fall.”

Hey, as long as you fall with style, it’s all good.

7. “The opinion is couched in a style that is as pretentious as its content is egotistic.”

Good thing Scalia’s got his glasses on.

6. “But what really astounds is the hubris reflected in today’s judicial Putsch.”

Is Ginsburg the Mockingjay?

5. “Buried beneath the mummeries and straining-to-be-memorable passages…”

Yikes. I hope they have some ice at the Supreme Court

4. Referring to the makeup of the Supreme Court: “Not a single South-westerner or even, to tell the truth, a genuine Westerner (California does not count).”

You’re not even real California, just get over it!

3. “…but anyone in a long-lasting marriage will attest that the happy state constricts, rather than expands, what one can prudently say.”

Scalia’s wife may have some words for him when he gets home today.

2. “The substance of today’s decree is not of immense personal importance to me.”

I don’t think he found any.

Takeway of the day: Scalia is very confused. And those brackets certainly aren’t helping.

To read more Scalia fun, make sure to check out the Top 10 Most Creative Quotes from Antonin Scalia’s Obamacare Dissent.

Maurin Mwombela
Maurin Mwombela is a member of the University of Pennsylvania class of 2017 and was a Law Street Media Fellow for the Summer 2015. He now blogs for Law Street, focusing on politics. Contact Maurin at staff@LawStreetMedia.com.
Share:
Related ItemsAntonin ScaliaJustice Antonin ScaliaJustice ScaliaMarriage EqualityObergefelle V. HodgesScaliaSCOTUSSupreme Court