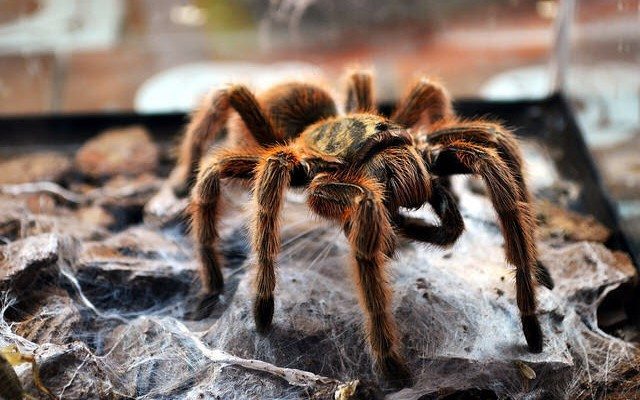 Do you know what is lurking beneath the crawl space of your house? Even if you think you do, you should probably go check because you might find some surprising things. Recently, Dwayne Melton found this out the hard way. You see, buried beneath the belly of his house lay 13 tarantulas. As you might expect, he was horrified when he realized this. There were supposed to be 18 tarantulas hibernating under there. And he would not even have realized that five of his pets had been stolen if he hadn’t gotten a call from the exotic pet store from whence the arachnids had originally been purchased. See? This is why you should do regular crawl space investigations.

(Now, before I say more about this week’s weird story, I have a couple of disclaimers: 1. I went to college in Cobb County where the criminal in this story resides; and 2. I, like most middle school girls, had a pet tarantula when I was growing up. His name was Harry, and I was never so scared in my life as I was the day I learned tarantulas shed their skin, making what appears to a 12-year-old girl a second, cloned tarantula that showed up miraculously overnight.)

A lot of what happened here is unknown as the Cobb County man being charged is still at large; however, what is known is that Melton was going about his day, thinking everything was good and his tarantulas were hibernating peacefully deep below his house. But those spiders were not the only ones that lurked there. A spider thief had found his way to the spider’s den.

This would have been the perfect crime. Since the tarantulas were hibernating, Melton was not checking them as often as he might, and it is possible that by the time the theft was discovered, the thief would have been long gone. However, this particular robber made a fatal flaw that led to him not getting the payback he would have received and might also get him arrested: he went to the local exotic pet store, Animart, to try to sell the tarantulas.

This is something that should go without saying, but I see now that it does, in fact, have to be said: if you steal an exotic pet from someone who is clearly a collector/breeder, do not go to the local exotic pet store to sell them. Go out of town for that.

If a pet is exotic, that probably means it is not as common a household pet, which means that someone who purchased 18 of them from a store is probably a pretty well-known client. Of course, Melton could have gone to another store or purchased them out of town or any number of other things, but why risk it? Make the chance of you getting caught that much lower and just go three towns over or something.

Not doing this is, at least partly, what got this man caught. (I don’t know enough about the tarantula trade to confidently say that no exotic pet store would find it suspicious to have a person try to sell it five tarantulas at once. However, if it wasn’t for the fact that the store knew the owner, I have to imagine it is much less likely this plan would have been foiled.)

When the thief took the animals to Animart, they looked at them, thought they might be Molten’s, and bought them for $60. Does it seem like a life of crime might be for you if money is the result? Well, since the spiders were worth about $60 each, it was not such a good payday for this man.

After the sale, the store called Molten and told him they thought they had his pets and asked him to come ID them (which shows this guy knew what he was doing in the spider world, because to me, one tarantula looks exactly like the one next to it–especially when the one next to it is actually the shell of his old tarantula skin that had been shed). He rushed home to check on his other 13 spiders and found them safe in their containers.

So there you have it, if you want to get rid of your spider problems in a more humane way, just cross your fingers and hope you have a spider thief lurking somewhere underneath your home.