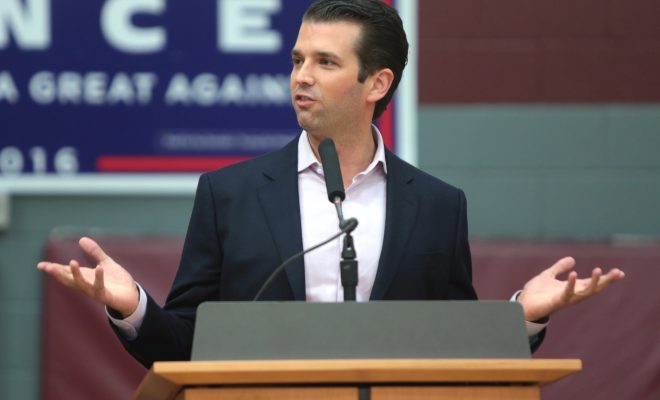 Today, President Donald Trump's oldest son, Donald Trump Jr., appeared to enjoy a nice, relaxing day by the pool. The weather was beautiful outside, so Trump Jr.'s choice of venue makes sense. But his attire grabbed Twitter's attention. Trump Jr. tweeted out a picture of himself wearing a t-shirt that poked a bit of fun at the "mainstream media":

I'm going to have to buy 5-10,000 of these to pass around to our buddies in the #MSM. In the meantime I'll model it for them😂. #yourewelcome pic.twitter.com/Hnn3Z5Pspm

And Twitter had quite a laugh editing and responding to the shirt. Check out some of the best responses in the slideshow below:

@DonaldJTrumpJr 1) This photo could not possibly be douchier. 2) Why are you wearing a child’s size small?

Anneliese Mahoney
Anneliese Mahoney is Managing Editor at Law Street and a Connecticut transplant to Washington D.C. She has a Bachelor’s degree in International Affairs from the George Washington University, and a passion for law, politics, and social issues. Contact Anneliese at amahoney@LawStreetMedia.com.
Share:
Related ItemsDonald Trump Jr.Fake NewsMainstream MediaPresidentTrump