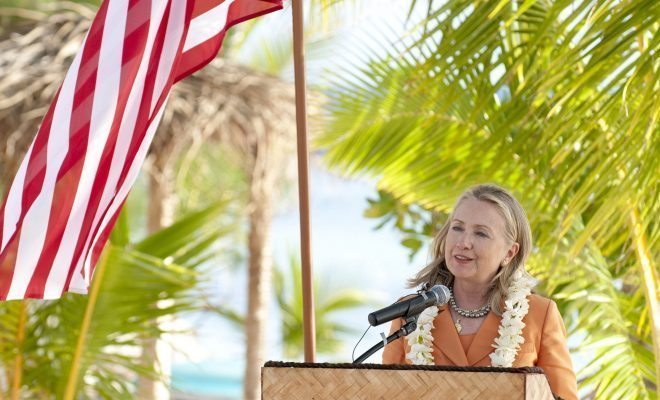 10 Thoughts I Have While Watching a Hillary Clinton Speech

It seems like there’s always a new speech from one of the presidential candidates on TV, trending on YouTube, or live streaming on Facebook. Sure, Trump’s speeches are bombastic, spittle-flecked, and nonsensical, making them much more fun to watch–but Clinton’s speeches contain their own bits of fun. After watching hours of footage on Clinton campaigning over the last few months,  I’ve noticed that the same thoughts come to me with every speech I watch. So here are the 10 thoughts I have when I watch a Hillary Clinton speech.

The sun sets, the tide comes in, Hillary nods. It’s a force of nature.

Whether she’s grooving on the crowd’s positive vibes, or listening to an interviewer, moderator, or ‘everyday American,’ Secretary Clinton’s head bobs along with mechanical timing. Could she really be paying such close attention to the other person talking?  Either Hill is a very, very patient person, or the nodding is her way of rewinding the large spring in her spine that provides her with energy. Alternate Theory: She’s always got “Smooth” by Santana stuck in her head, and is following the beat at all times.

I’m a dude, which means I don’t fully appreciate how cool Hillary’s candidacy is–this is really the first time everyone in the country is listening to what a woman has to say as a presidential candidate. So when H-Dawg refuses to back down from supporting women, it reveals a little glimpse of a female-positive future. We’ve got female Ghostbusters now, and the world didn’t end, so can’t we let a woman lead this country?

This is exactly how I laugh when I remember something funny I saw online earlier, and can’t explain it to others.

You know the lines I’m talking about. The jokes written into her speeches that are just funny enough to include, but provide a little dose of cringe as well. Doing her best 1992-era Ellen impression, Hillary riffs:

Trump U. That doesn’t sound appropriate, does it? I am going to use that more. Because if he gets anywhere near the White House, you know what he is going to do? He is going to Trump U.

Oh, I get it! It’s like “F. U.” but with Trump’s name? Brilliant. How about saying that if “playing the woman card is fighting for equal wages, women’s health, and paid family leave, then deal me in!” I’m clapping for the cause, but I’m sort of faking the laugh.

“Rough, rough, rough”–Clinton describes the effect her busy speaking schedule has on her voice.

I’ve got mad love for Secretary Clinton, but I’ve got to be honest; sometimes she shouts a bit too much. I hope that’s not sexist to say, considering I think Bernie Sanders always shouts too much. Being on the campaign trail has got to be tough for many reasons, but in the day and age of the microphone it shouldn’t be tough on your vocal cords. Hillary’s voice is already sore and hoarse from all the talking she has to do, so please, leave the yelling to Trump, it doesn’t pantsuit you, Hill. Plus, haven’t promising Democratic candidates been burned by yelling in the past?

5. Her Hand Motions Are So Precise

If I had photoshop abilities, I’d add some googly eyes and feathers to Hillary’s hand to make an emu. I don’t. So I didn’t.

Every speaker has their own set of hand motions. You’ve got Trump’s little fists doing a lot of sliding and pointing, Bernie pawing and petting the air with both hands in different directions, and Obama’s measured gestures. Hillary’s got her own set–the most notable one being the pinch-and-poke. Her hand forms the beak of an emu, and it snaps in the air with each syllable.

6. I Start Imagining A Trump Presidency

Trump can’t be president. I mean, there’s just no way something that cataclysmic could actually happen. A guy with no political experience, policy savvy, or common sense certainly can’t con the country into giving him the White House? Then again, today on my walk to work I ran into no fewer than a dozen Pokémon trainers, so maybe the end-times are upon us. Either way, you just have to laugh, if only to keep from crying.

7. I Do A Wardrobe Moral Double Take

This might also be dangerous territory. As with any speech, at a certain point I get a little lost and focus on the visuals, forming my opinion of what Hillary is wearing. Do I do that for male politicians? Short Answer: No. (Long Answer: Only if they’re wearing a tan suit.) Sometimes I think what she’s wearing looks great, or I notice that I like the current hairstyle better than the one she had a few months ago. But then I start to worry, “is it alright for me to have an opinion on this?” I’m undoing all the great feminist work that Susan B. Anthony and Alanis Morissette fought for! So I stay positive, and try to focus my attention on the ideas being shared, rather than the fabric being worn.

8. Start Vibing Off Of The Nuanced Discussion Of The Issues

That bulb in the background is bursting the same way my head does when I hear “this problem has systemic causes” this election cycle instead of “We’re losing. We’re gonna win.”

I’ve got these large, honkin’ headphones with an eight-foot long cord, and they block out the outside world entirely. This might be a guilty pleasure, but sometimes when I’m watching a speech live on my computer, I slide on those headphones, close my eyes, and bask in the nuanced language and detailed discussion. Hours in front of the TV have filled my ears with dozens of soundbites played over and over, and simplified solutions (a twelve-billion dollar wall, anyone?) Because of this barrage, it’s nice to hone in on a reasonable person speaking reasonably about reasonable ideas. Ahhh, knowledge truly is bliss.

My face, the minute I’m accused of absolutely anything, while deciding how honest I’m gonna be when I respond.

You can’t spell serious without “Clinton.” Or maybe you can–I’m not gonna try. The point is, for a ‘boring candidate,’ she’s got a whole catalog of hilarious facial expressions. Watching her speeches easily inspires a drinking game–one sip for every emu-peck, clapping-laugh, funny face, or Donald Trump diss. (Actually, please drink responsibly…don’t play games designed to make you binge drink)

Is there a way to make my computer background a gif? There must be. If so, I’d like to use this one please.

Hillary Clinton will tell you that she’s not a natural campaigner, and not a gifted orator. While she does seem to be better suited for a conference or situation room than a sold-out arena, every once in a while her speeches contain moments of excellence. Even the most logical supporter might get a little carried away at points during her nomination announcement speech, where the energy of the room is through the roof. It’s enough to make you shout “Yaass!” and then feel self-conscious for saying yaass out loud. Don’t worry, you won’t have to be self-conscious on inauguration day.