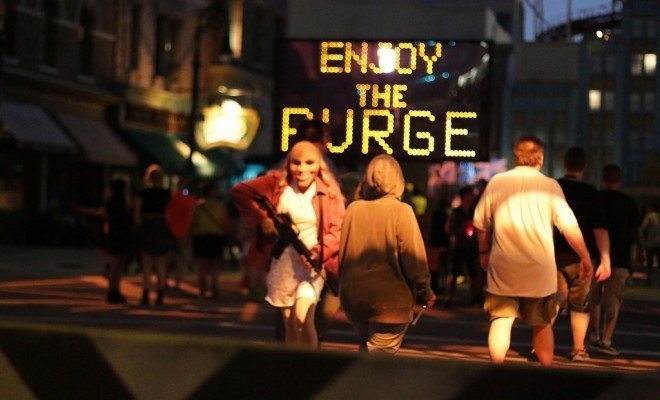 “The Purge: Election Year” is the Ridiculous Distraction We all Need from 2016

I am so immensely tired of the 2016 election cycle so far. It’s been a fascinating election, with so many things to cover and horrible gaffes to make fun of, but I constantly think to myself: “How is not even Super Tuesday yet?” Luckily, we have a beautiful, gratuitously violent, and weirdly relevant distraction on the way, in the form of the new trailer for the third installment in the “Purge” franchise: “The Purge: Election Year.”

I remember seeing “The Purge” trailers for the first installment in 2013, and at first I was less than enthralled. The premise is interesting, but one that has probably popped up in hundreds of amateur horror novels: imagine if we lived in a version of America where, for 12 hours once a year, all laws vanished. People could do whatever they want–whether that means looting, general debauchery, or in this case, murder. There are some restrictions–certain types of weapons like bazookas and rocket launchers can’t be used–but other than that, it’s a murder-y free-for-all. The first movie, “The Purge” was pretty successful, and there were some references to the role that income inequality plays in those who are murdered during the purge, but I wouldn’t necessarily call it stellar social commentary.

And now we have the newest movie coming out this summer: “The Purge: Election Year.” Frank Grillo comes back as the “Sergeant,” in a nice attempt at continuity. But instead of a renegade cop looking to avenge the son he lost during an earlier purge, he’s the head bodyguard for Senator Charlene Rowan. (Rowan is played by Elizabeth Mitchell, a.k.a. Juliet from “Lost,” which really just makes me even more pathetically excited about this entire thing.) In “Election Year,” Rowan is attempting to run for President in the hopes of putting an end to the purge, so of course, everything goes horribly wrong and people try to kill her during that year’s purge. Like “Anarchy,” it appears that the third installment will focus a bit more on the macro level sociopolitical concept of a purge than the original movie.

At the end of the day, “The Purge” franchise is as frivolous as it is bloody, but there’s something refreshingly ballsy about creating “The Purge: Election Year” during an…election year. As the country battles over who to vote for, a post-apocalyptic parallel in which politics are literally life and death is strangely compelling. Come July, when this movie actually comes out, I’m sure we’ll be experiencing just as much election fatigue, and I’m not sure about you, but I’m thinking this will be a fun distraction.

Anneliese Mahoney
Anneliese Mahoney is Managing Editor at Law Street and a Connecticut transplant to Washington D.C. She has a Bachelor’s degree in International Affairs from the George Washington University, and a passion for law, politics, and social issues. Contact Anneliese at amahoney@LawStreetMedia.com.
Share:
Related ItemsElection YearFilmHorrorInequalityMoviePoliticsThe PurgeThe Purge: AnarchyThe Purge: Election Year